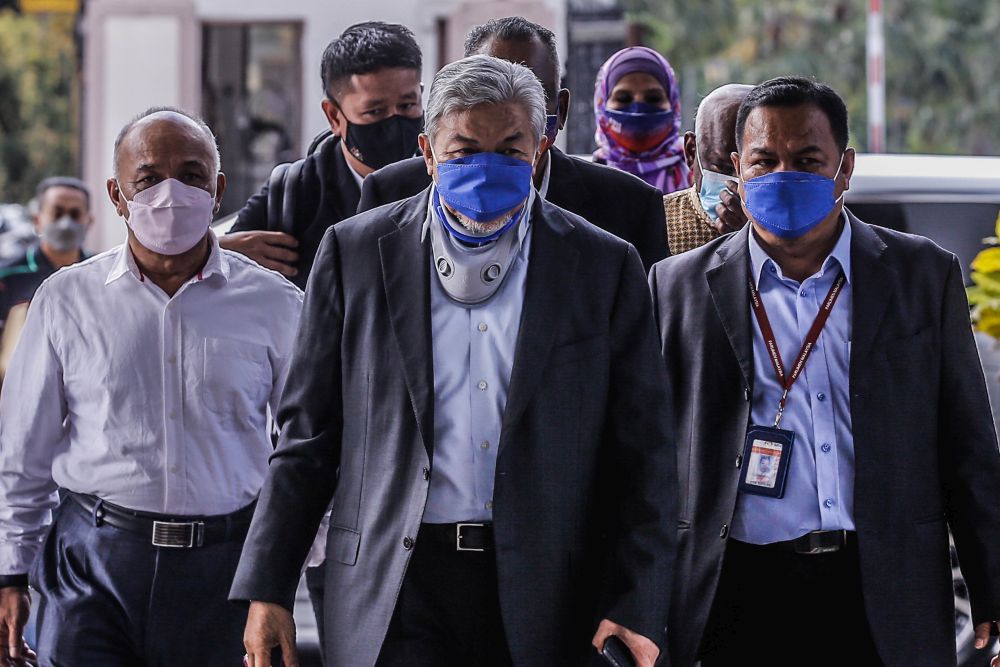 Hamidi Mohd Noh, a lawyer for Zahid, informed trial judge Datuk Collin Lawrence Sequerah this morning that his ankle had become swollen from gout and that he had informed the rest of the defence team of his condition as they were en route to court.

The problem is only Im prepared to address Yang Arif today, this is not a pre-planned thing. Nobody knows if they are going to get gout, he said just slightly past 11am when the trial was about to start.

Hamidi said he was under immense pain and had wanted to go to the clinic to get a jab for a painkiller, and that he was worried as he was currently also under insulin medication.

Because of that worry, I already set an appointment with my doctor and it is an emergency, Hamidi said, adding: Gout is painful, Im under tremendous pain.

Hamidi said his medical appointment was at 1.30pm and asked the judge if he wanted to postpone or proceed with the case anyway.

Sequerah signalled that Hamidi should begin and inform the court when he feels discomfort or pain.

The judge also allowed Hamidi to sit instead of stand while presenting his case.

Hamidi made his argument for about 20 minutes while standing, but then asked to sit down and asked for a brief break due to pain.

After the break, Hamidi informed the court that he could not continue due to the pain.

I dont think I can. I would like to ask to postpone the case today under my condition right now, having pain, I cant even speak straight.

So I apologise for my condition and I think I need to see my doctor now, Yang Arif. I tried to accommodate but I dont think I can. Im not in a proper condition to represent my client, Hamidi told the judge.

The judge then noted: Hamidi is in pain, I dont think he can carry on.

Lead prosecutor Datuk Raja Rozela Raja Toran also agreed and said I think we should let him get treatment.

The High Court then allowed the trial to end earlier today, with the hearing to resume on the previously scheduled date of this Wednesday.

In this trial, Ahmad Zahid ? who is a former home minister and currently the Umno president ? is facing 47 charges, namely 12 counts of criminal breach of trust in relation to charitable foundation Yayasan Akalbudis funds, 27 counts of money laundering, and eight counts of bribery charges. – Malay Mail