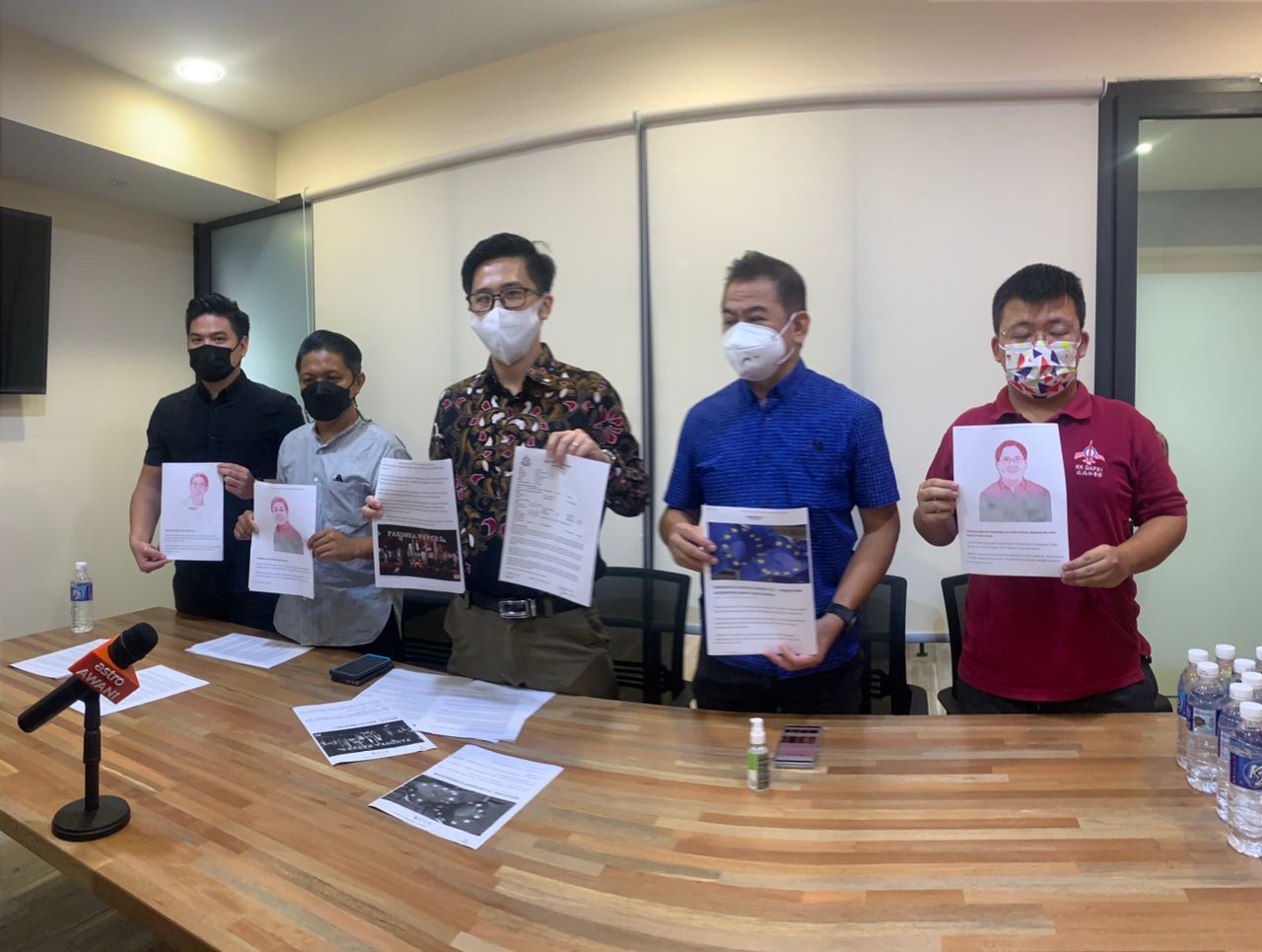 Lee (centre) with (from left) Thien, Shahrizal, Felix and Chan after the press conference on Thursday.

KOTA KINABALU(Oct 14): Pakatan Harapan Youth and other opposition parties on Thursday lodged a police report urging the authorities to expedite investigation into the Pandora Papers allegations that several Malaysian politicians were involved in various offshore financial activities in an effort to hide assets worth billions of ringgit.

Pakatan Harapan Youth chief Howard Lee Chuan How said the illegal flow of Malaysian money abroad amounting to RM1,800 billion from 2005 to 2015, as reported by Global Financial Integrity (GFI), needs to be investigated in a transparent and thorough manner.

We consider that the Pandora Papers leak expose has tarnished the integrity of our country and it should not be taken lightly by the authorities. The implications are quite serious and must be taken into account because we cannot accept that Malaysia is now allowing manipulation of state property for personal gain.

The individuals listed in the Pandora Papers consisting of political figures, their family members, and corporate tycoons have smeared the good image of Malaysians for this personal gain, he said at a press conference at the DAP N.21 Luyang service centre in Luyang on Thursday.

Lee said the revelations of the International Consortium of Investigative Journalism (ICIJ) called Pandora Papers and Panama Papers are evidence and clues to Malaysian justice institutions to investigate the masterminds involved in the illegal flow of money and property abroad.

Shamefully, this is also the first time Malaysia has been included in the European Union (EU) Gray List as a Non-Cooperative Nations for tax evasion on October 7, 2021. This listing means that Malaysia is involved in tax fraud, money laundering, tax evasion, and hiding sources of wealth that were believed obtained illegally.

While the countrys health workers are struggling with the Covid-19 pandemic, the rakyat are fighting to put food on the table during this stressful economy, while learning that several of our politicians have extraordinary wealth in offshore accounts is just heartbreaking, he said.

We emphasize that the individuals mentioned in the Pandora Papers consisted of those who hold important positions in the governance, including businessmen who were formerly involved in politics. When everything was revealed, we then realized how disgusting some of our leaders have used various methods to protect their assets by using foundations and offshore instruments for their own financial benefit.

We know that not all offshore accounts are tax evasion or money laundering vehicles, but those leaders whose names have been exposed should come forward and allow the relevant authorities to investigate to clear their name of any allegations.

This is the reason why we have lodged a police report, to urge the authorities to investigate this matter in a transparent manner.

We also urge parliament and state assembly to allow for the Pandora Paper to be debated.

We also call on those who have been named in the Pandora Papers, if they are not involved in any wrongdoing or illegal activities that will violate the law, to come forward and assist the police and the relevant authorities to clear their name and the sovereignty of the country, he said.