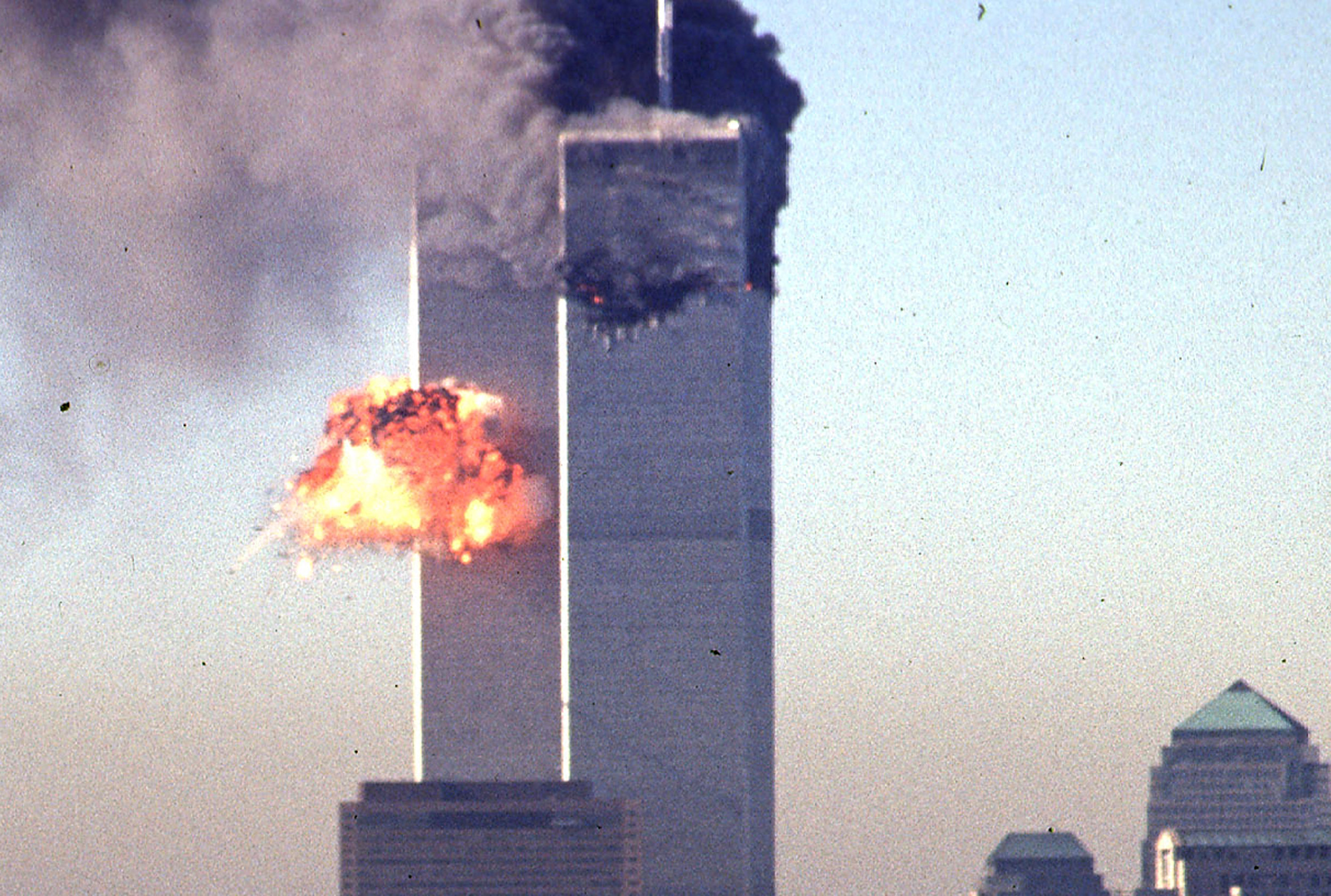 In this file photo, smoke and flames erupt from the twin towers of the World Trade Center after commercial aircraft were deliberately crashed into the buildings in lower Manhattan, New York on Sept 11, 2001. This year marks the 20th anniversary of the 9/11 attacks that left nearly 3,000 people dead. — AFP photo

WASHINGTON (Aug 25):The sky was a peaceful blue and America looked at the pinnacle of power, the Soviet Union defeated and predictions abounding of the inevitable triumph of liberal democracy and free markets.

When Al-Qaeda hijackers killed nearly 3,000 people on September 11, 2001, the United States instantly took on a new mission as a furious and fearful nation coalesced around president George W. Bush’s “war on terrorism” that would obliterate the rest of the international agenda.

Twenty years later, the world has transformed. An all-consuming focus on terrorism has given way to a weariness about “forever wars”; days before the September 11 anniversary, Taliban militants who had been swiftly defeated after the 2001 attacks seized back power in Afghanistan amid a US withdrawal.

“We may come full circle,” said Mark Green, a former US ambassador and aid chief, fearing a resurgence of under-governed areas from which extremists can operate.

In the view of President Joe Biden, and to a large extent his two predecessors, Bush’s wars have been costly distractions from a broad competition with a fast-growing China, which they see as far more likely than bands of violent Islamists to challenge US dominance in the 21st century.

Bush, with stalwart backing from Britain, proceeded in 2003 to invade Iraq, defying some of the Western world’s largest protests in modern times as he vowed to eliminate weapons of mass destruction that never materialized.

But the “war on terror” went much further, even after Bush’s successor Barack Obama stopped using the loaded term.

A sweeping authorisation of force approved almost unanimously by Congress days after September 11 — as Bush vowed “either you are with us or you are with the terrorists” — has been used to justify strikes in 19 countries, with a surge of defense spending helping the United States hone drone technology that makes it the only country with the capacity to attack virtually anywhere in the world.

Did it work? The United States has avoided another major terror attack, Al-Qaeda leader Osama bin Laden was hunted down in Pakistan, Iraq’s brutal dictator Saddam Hussein is no more and Afghanistan, at least until now, enjoyed social advances including in women’s rights.

But more than 800,000 have died, led by Iraqi and Afghan civilians, at a cost of more than $6.4 trillion to the United States, according to a Brown University study in late 2019. And on a global scale, terrorist attacks have not ended but have risen sharply since September 11.

Days before September 11, Bush spent Labor Day visiting the district of Green, then a young congressman from his Republican Party. After a sluggish start to his presidency, Bush told Green that his three priorities would be taxes, education and energy.

When they next spoke in October, Green reminded the president of the conversation. Bush, Green recalled, “shook his head slowly and said, ‘all of that was blown clear out of the water.'”

“All of a sudden, he’s a wartime president, and everything has changed,” said Green, now president of the Woodrow Wilson International Center for Scholars.

Green acknowledged that Biden was in tune with ensuing shifts in public opinion. But Green said that US leaders could have made a better case.

“In the wake of 9/11, I do think the world more broadly was awakened to the dangers of violent extremism. But you look today and, of course, we have a generation of young people who don’t know it, for whom this is history,” Green told AFP.

“And one thing we are not very good at is reminding people why we do what we do,” he said.

“America is a beacon of hope, it’s an aspirational concept. It’s not merely territory; it’s a set of ideas and people rally to those ideas when we express them clearly and we stand by others.”

“9/11 ignited two wars in the region that would forever change the balance of power in the region and whose reverberations continue to this day and will continue into the future,” said Alshamary, a Baghdad-based scholar at Harvard University’s Kennedy School.

The Islamic State group, which has waged a genocidal campaign against non-Sunni Muslim minorities and attracted European recruits who returned home to carry out brutal attacks, rose in Iraq and neighboring Syria after Obama pulled out troops first sent by Bush.

For many in the region, Alshamary said, the United States is seen not primarily as a champion of democracy but as the adversary of Iran — a Shiite Muslim state that, paradoxically, gained ground after the United States removed its nemeses Saddam and the Taliban.

“9/11 is an important moment in American public memory but that’s not the case in the Middle East,” she said.

“Don’t forget that the region is young and how it really only knows this type of America.”

John Bolton, a top foreign policy figure under Bush and outspoken advocate of US sovereignty who would later serve as national security advisor to Donald Trump, said he understood the public frustration over the financial costs of war.

The United States, he said, should never have set out on “nation-building” that was doomed to fail.

But he challenged the notion that Americans would instinctively reject long-term military commitments, pointing to broad acceptance of keeping US troops in Europe, Japan and South Korea to maintain order since the aftermath of World War II.

“Twenty years is a drop in the bucket. But successive American presidents — certainly Obama, Trump and Biden — don’t agree with that,” Bolton told AFP.

“And so they have not explained why forward defense is a form of insurance and that it’s better to defend against the terrorist threat in Afghanistan than in the streets and skies over America.”

On Afghanistan, he said the US push to create a strong central government — seen by advocates as a requisite to build a national army — was alien to the country’s traditions.

“A lot of it hasn’t worked because it wasn’t going to work,” Bolton said.

“If you just said, to start, OK, we won’t have a strong central government, we will have warlords with significant capability that can kick Taliban butt when we need to, maybe that works. But we didn’t try that.”

Was there another way?

Biden, whose late son Beau served in Iraq, has himself argued that US troops are not deployed to put girls in school — one achievement often cited in Afghanistan after the 2001 defeat of the Taliban and their draconian brand of Islam.

But in the aftermath of September 11, another conception of American power dominated.

Andrew Bacevich, a historian who in 2019 co-founded the Quincy Institute for Responsible Statecraft, a think tank that advocates military restraint, said that the US foreign policy establishment of 20 years ago was consumed by “ideological hubris.”

The Soviet Union’s collapse had spawned talk of a long-term lone superpower and, in the famous words of Francis Fukayama, “the end of history” with liberal democracy victorious.

Bacevich said that the United States also saw itself as militarily invincible in the wake of the 1991 Gulf War — the crushing, television-friendly first defeat of Saddam Hussein after he invaded Kuwait.

“The hubris and the militarism, I would argue, led Bush and those around him to see 9/11 as both an unforgivable insult on the one hand but also as a great opportunity that we would now be able to affirm beyond the shadow of a doubt what the end of the Cold War and the Iraq war of 1991 actually signify,” Bacevich said.

“That was a horrendous misjudgment for which I think we’re still paying.”

For Bacevich, the United States could have responded to September 11 not with global war but a targeted police-like operation to hold accountable the perpetrators.

Taliban members tried to negotiate a surrender in November 2001, a month after the US assault. But Bush’s defense secretary, Donald Rumsfeld, rejected any such deal, saying the United States did not want Al-Qaeda or armed Taliban to get away.

The war would instead continue for 20 years until a Taliban victory.

How much has changed?

Elie Tenenbaum, a research fellow at the French Institute of International Relations, said that Bush falsely believed that international empathy for the United States after September 11 would endure, even when Bush by 2002 was vowing to take on an “Axis of Evil” of Iraq, Iran and North Korea — three nations with no connection to the attacks.

“The image of America never stopped declining,” he said.

The US reputation also suffered from the opening of a prison for terrorism suspects at the US naval base in Guantanamo Bay, Cuba, a location chosen to deprive defendants of US constitutional protections and that initially had overwhelming US public support.

Only about 40 inmates remain but the prison remains open, more than a year after a freshly elected Obama vowed to close it within a year.

“Operationally and strategically, the war on terrorism of 2001-2002 had partly achieved its objective. Al-Qaeda was very seriously weakened and there haven’t been any attacks on the scale of September 11,” said Tenenbaum, the co-author of a book on the 20 years of war.

But worldwide, he said, there are two to three times as many radical jihadists identified now as in 2001 and the number of attacks and victims has risen threefold.

Even as the “war on terror” appears to wind down and attention moves to China, Bacevich wondered how much has changed.

“It’s really a shift to a new theater in which the effort to preserve or restore American primacy is going to resume and where the problem is going to be defined once more in military terms,” he said.

“So in that sense, no, things haven’t really changed all that much.” — AFP