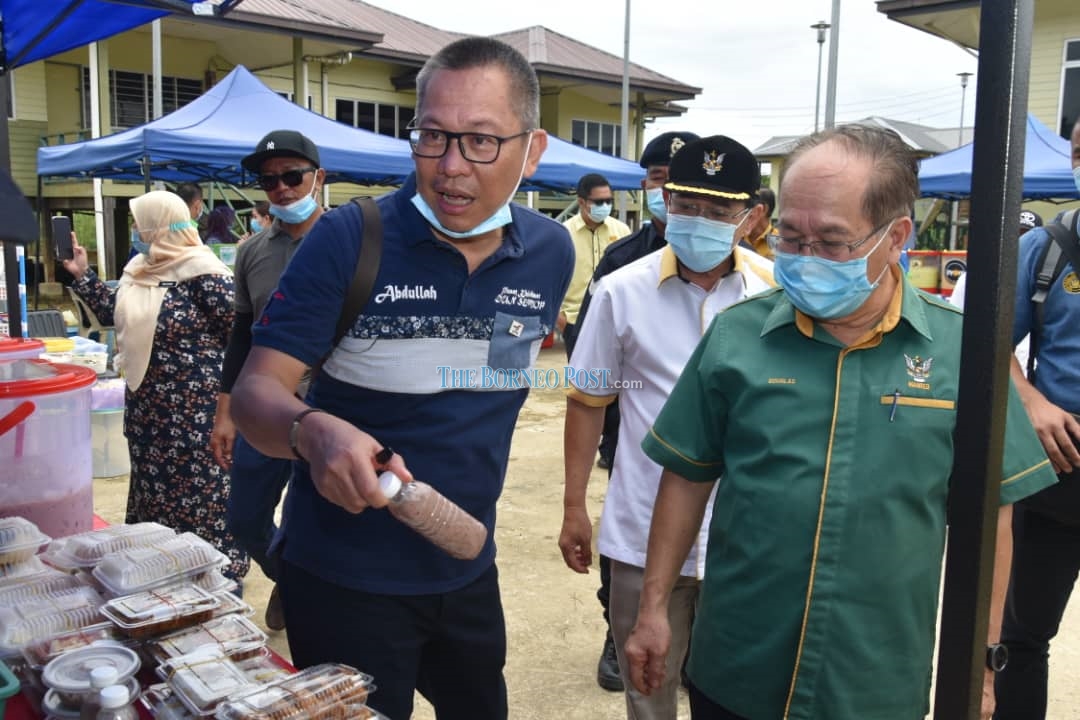 Abdullah Saidol (left) and Uggah looking at some of the local products sold by fishermen in conjunction with the opening of the Tekajong Agriculture Station.

He said that the food basket area was now from Betong until Jemoreng and an initial sum of RM187 million had been set aside to develop its necessary infrastructure and drainage and irrigation system.

“The Mukah Division area has great potentials for marine products and agro-industry. For the agro-industry, we are eyeing large scale banana, pineapple, coconut and other food crop cultivation and processing.

“These are for export as we target to be a net food and food product exporter by 2030. We have already a good start as we are already exporting many food products to a number of overseas countries,” he said after declaring open the RM3 million Tekajong Agriculture Station here today.

On the new station, Uggah who is the Minister of Agriculture Modernisation, Native land and Regional Development, called on officers of the department not to be reluctant or afraid of acquiring modern technologies.

“Your duties are to help transform the sector into a modern one. Gone are the days when your roles are about distributing subsidies or fertiliser and others.

“Acquire modern knowledge like the new farming method of fertigation, hydroponics, usage of the IoT (Internet of Things) and others and spread them among the farmers, he said.

He said these methods yielded much more harvest thus promising a better income for farmers.

When our state move into the high income society by 2030 our rural folks are not left behind,” he said.

Uggah added all new agriculture stations should also act as incubators for farmers where they could learn some food processing and modern packaging standards.

He also said all new stations should have ample space where the officers could organise demonstration plots for fertigation and hydroponic farming.

Later, when speaking to the media, Uggah said the government was still in the process of identifying successful buyers for the 300 units of the three bedrooms (plus two washrooms) houses at the Semop Rural Growth Centre.

Each unit costs RM75,000.00 and is only for registered fishermen in the area.

He said the government had spent RM23.5 million on the project.

On the Bruit Area Fisherman Association, he described it as one of the more successful such associations in the state.

“Because of good and honest management, it now has assets worth RM2.3 million.

“I hope other fishermen associations can emulate its success,” he said.

Assistant Minister in the Chief Minister’s Office (Corporate Affairs and Sarawak Public Communication Unit) Abdullah Saidol said Uggah’s visit was for him to see how the fishermen and farmers had contributed to Bruit economic development.

“We hope in justification of their roles, he can provide us with more fund and grants for to bring in other needed infrastructures and facilities for them to move further forward.” he said.

Tanjung Manis member of parliament Yusuf Wahap and the Permanent Secretary to the Ministry of Agriculture Modernisation, Native Land and Regional Development Edwin Abit were among those present.