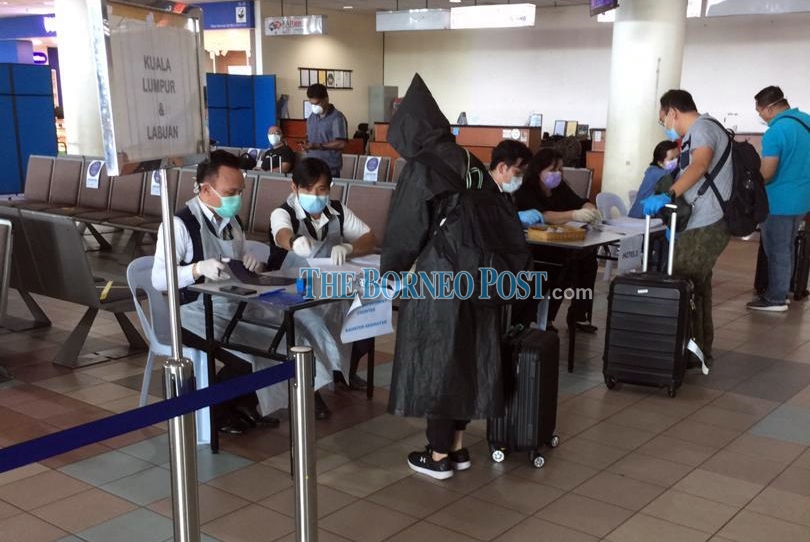 Passengers arriving from Kuala Lumpur and Miri yesterday were screened at Miri Airport before being sent to their respective hotels to undergo a mandatory 14-day quarantine. – File photo

He said there was an occasion where Sibu did not have enough hotel rooms to accommodate the incoming number of new PUS cases, and consequently the state government had to stop several incoming flights to Sibu at the time.

Uggah said the decision to stop some flights and not allow some students to come back was not easy to make, but was a necessity to prevent further infection of Covid-19.

And now Sabah is following us, they also stop many flights coming in. So it is not a very easy decision, and we know that this disease is very contagious.

Thats why we always consult our medical experts before finalising any decision, he said.

Uggah was also asked about concerns where two student PUS cases were placed in the same hotel room, which may pose risk of infection between them if one were to be found positive.

When we were told there will be more than 7,000 students coming back from the peninsula, Sabah and Labuan, including normal Sarawakians coming back, their numbers are so big.

We were also told most of the students were staying in their respective campus, so its the same as quarantine or isolation.

Therefore we consider them as PUS and not very high risk. We also look at the capacity of the hotel rooms in Sarawak. Since we decided to quarantine them, then the only option is cannot be one person per room.

But if one of the students showed symptoms during screening upon arrival, he will be sent to the hospital immediately, he said.

Uggah said due to the limited hotel rooms in Sarawak, SDMC has decided to place two students per hotel room.

We sought the advice of medical experts before we implemented this policy. So we were advised that we can put two in a room.

If one of them happens to be positive later, then we only will detect the room mate as close contact, he said.