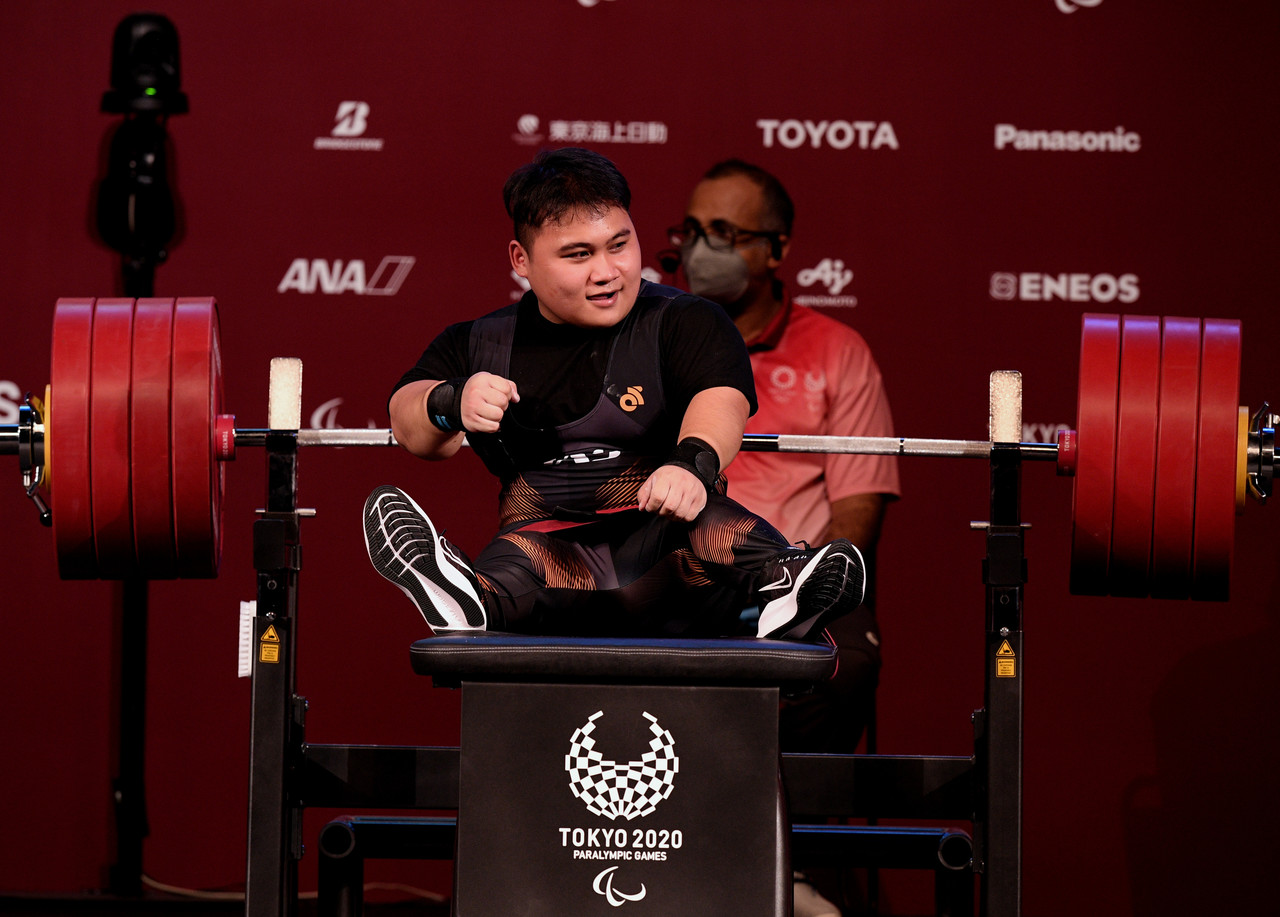 Bonnie reacting after a successful lift during the Tokyo 2020 Paralympic Games at the Tokyo International Forum today. Bernama photo

Bonnie, who won gold in the men’s 72 kilogramme (kg) powerlifting event, said that both of them played key roles in shaping his success in the world of sports.

He said that his father, Gustin Jenang, 54, who had won the bronze in the men’s 59kg category at the 2017 Kuala Lumpur ASEAN Para Games, had encouraged him to become the successful athlete that he is today.

Bonnie was proud and relieved to be able to fulfill the wish of his father who had wanted to compete in the Paralympic Games when he had represented the country before.

“This success is for my father, he used to want to represent the country in the Paralympic Games but did not succeed. I am very happy to win the country’s first gold here,” he said when met by reporters.

The dwarf-sized 22-year-old from Sarawak not only won the gold but also broke Iraqi Rasool Mohsin’s Paralympics record of 227kg that he set in Rio 2016 by lifting 228kg in his third attempt at the Tokyo International Forum (the venue) en route to the gold today.

The silver medal was won by Egyptian athlete Mahmoud Attia while the bronze went to Micky Yule of Great Britain.

Bonnie said his interest in powerlifting arose when he often followed his father to train as a child before starting to represent the country in 2017.

In addition to his father, Bonnie was also excited to deliver a gold medal for his coach, Jamil Adam, who celebrated his 52nd birthday yesterday because the man never tired of giving him a boost to do his best no matter whether he felt stressed or otherwise in training sessions or competitions.

However, Bonnie was upset for failing to break his own world record of 230kg that he set at the 11th Fazza Dubai Powerlifting World Cup in the United Arab Emirates (UAE) last June. He failed to lift 231kg ??in his fourth attempt today.

Admitting that he was nervous because this is his debut at the Games, he also stated that the fatigue he experienced after breaking the Paralympics record resulted in him not being able to improve on his own world record.

“Maybe a little tired and my breath at that time was not enough to make the last push,” he explained, adding that he hid his nervousness form his coach during the competition.

On his plans after this, Bonnie said he intended to take a break by returning to Sarawak to meet his family before making preparations for the world championship in Georgia, this November.

He added that his family also managed to give him added motivation when he contacted them last night.

Bonnie, who likes to listen to rock music to calm himself down before competing, is also determined to work even harder to continue his excellent run in Paris 2024.

At the same time, he hopes that his success will give inspire his other teammates to achieve the three-gold target set for the Malaysian contingent in Japan, besides wanting to provide a source of inspiration to people like him, because for him, there is no obstacle for someone to succeed in life. – Bernama