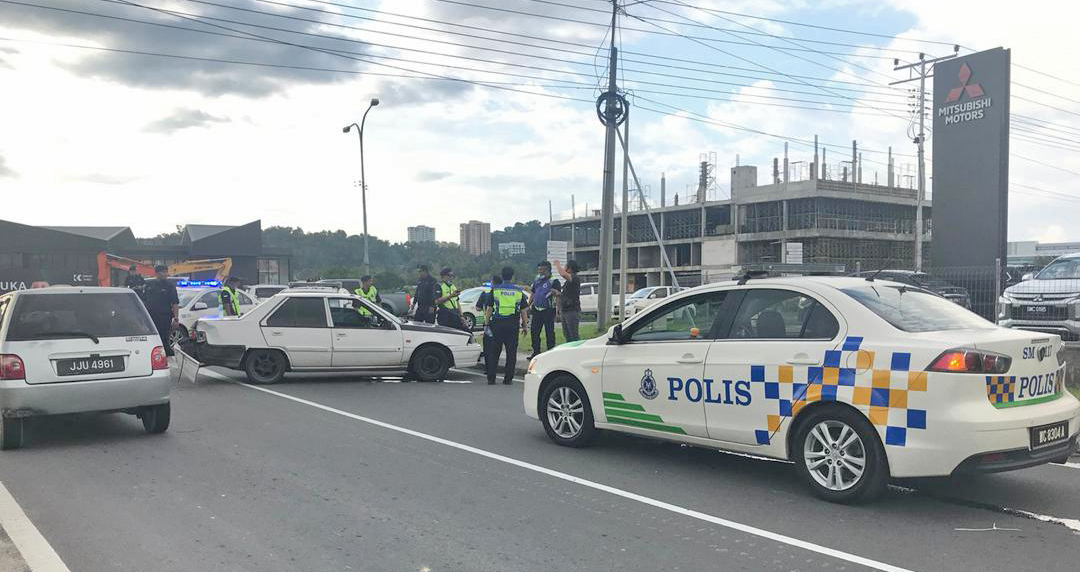 The police apprehended the suspects along Jalan Lintas after a car chase.

KOTA KINABALU: Police detained three drug suspects after chasing a Proton Saga car for about 30 minutes before it crashed into a curbside along Jalan Lintas here yesterday.

In the 3.30pm incident, six police personnel from the Kota Kinabalu Police Contingent in four police mobile patrol vehicles (MPVs) managed to apprehend the three suspects who were said to be high on drugs.
Kota Kinabalu police chief ACP Habibi Majinji said prior to the incident, an MPV had earlier stopped a white Proton Saga car at Jalan Burung Keleko in Inanam for a routine inspection.
As police were about to inspect the three passengers in the car, the driver immediately sped off from the scene, prompting my men to chase after them.
The suspects were not only speeding down the busy Jalan Tuaran Road, but also refused to stop when police ordered them to do so.

Three other MPVs then came to assist in the chase all the way from Kingfisher Road right up to Jalan Lintas in Kolombong.

At one point, the suspects vehicle entered the opposite lane to evade the four MPVs, but instead crashed into a curbside.

After crashing, the suspects then tried to flee on foot but MPV police arrived just on time and apprehended all of them, he told the media at the scene yesterday.
Habibi said early investigation revealed that the suspects, age 38, 21 and 44 from Sandakan, Kudat and Bongawan respectively, admitted to have earlier consumed syabu.
Police also found several packets of crystal substance, believed to be syabu, on the suspects, he said.

He also said that all three suspects sustained minor injuries due to the self-accident and would be taken to the Queen Elizabeth Hospital for treatment.
After treatment, we will detain them for further investigation to determine if they were involved in any criminal activity.

For now, the suspects are being detained for investigation under Section 12(2) of the Dangerous Drugs Act 1952 for drug possession, and Section 186 of the Penal Code for obstructing public servant in discharging public functions, he said.