Cop sentenced to death for murder of single mum 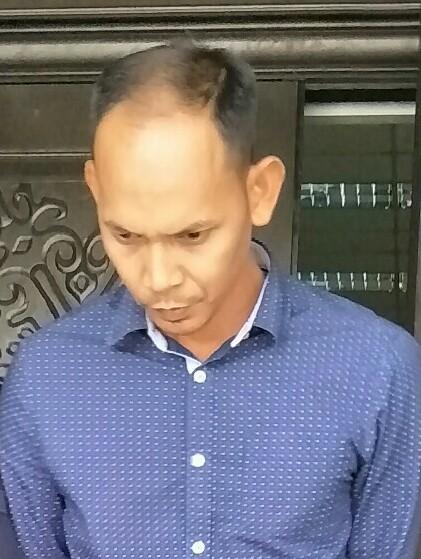 Justice Datuk Nurchaya Hj Arshad found Ahmad Rizal Umar, 37, guilty of the charge under Section 302 of the Penal Code.
In her reserved decision, the judge held that after “having devoured the evidence adduced and written submissions produced by the respective parties in the winding up of the most compelling gripping murder saga of Kartini Borhan (the deceased) and my outline of the most pertinent existing factors needed to be appraised and having deliberated over the same I now arrive at my decision.
“I am satisfied that the prosecution has proven all the elements of the charges preferred against the accused beyond all reasonable doubts and the defence has failed to prove on a balance of probabilities to rebut the finding of prima facie case and I am also satisfied that his evidence has not raised any reasonable doubt as to the truth of the prosecutions case,” the court ruled.
The judge said she therefore found the accused guilty as charged and convicted him accordingly. The accused was hereby sentenced to death by hanging to the neck until death.
Further in her verdict, the judge explained that the accused, a police inspector attached to the Keningau police station, was charged with an offence of murder under the said section and upon conviction, he was sentenced to death by hanging.
“That on the 29th day of September 2011 between 4am and 5am, in a house located at Taman Adika in Keningau, the accused committed murder by causing the death of Kartini.
“The death of the deceased was confirmed by Dr. Jessie Hiu, the second prosecution witness, a pathologist who conducted a post-mortem on the deceaseds body on September 30, 2011 and also certified the cause of death of the deceased to be stab wound on the deceased’s chest which was directed downwards cutting the rib muscles, left lung, the covering of the heart and penetrated the heart through and through from the top right to the bottom of the heart,” the judge explained.
She further said the deceased had been identified by her father, Borhan, the sixth prosecution witness, before the post-mortem of the death of Kartini had taken place.
“The learned deputy public prosecutor through their witnesses unveiled the accuseds manifested destiny by becoming embroiled with the deceased which in the finale led to her being murdered by the former.
“The court found that the total effect of the prosecution evidence led to the irresistible inference and conclusion that it was the accused who had committed this crime.

“The presence of the accused at the scene of the crime which is the aforesaid premises in which the deceased was a subtenant of the first room, was undisputed, there was insufficient evidence that there was a third party involved as asserted by the defence, a robber-turned assailant to stab the deceased to her death as well as injuring the accused,” said the judge.

She further held that this was substantiated by the medical expert opinion, the 23rd prosecution witness’ findings that the injuries sustained by the accused were seIf-inflicted, there was no third party involved but only the fights between the deceased and the accused, who caused the death of the deceased.

“That the injuries inflicted on the deceased which resulted in her death was caused by the accused,” she said.

Further on the motive which led to the killing, the judge found that there was merely because of a triangular love affair between the deceased and the accused on the one hand and deceased and the 12th prosecution witness on the other end which continued to persist until the death of the deceased.

“Their cataclysmic saga of a triangle love affair relationship gave rise to a ‘catch-22 situation’ which breathe a crime of passion and indeed, it finally, succumbed to despair on the dawn of 29.9.2011 to begin with on the late night of 28.9.2011 episode an incident eventually spurred the motive of causing such bodily injury to the deceased which is sufficient in the ordinary course of nature to cause death.

“On the premised upon the pathologists evidence of the nature of the injury to the chest of the deceased which resulted in her death viewed objectively indicates that the said injury on the deceaseds chest was sufficient in the ordinary course of nature to cause death; when the heart of the deceased had been pierced through, death must be the probable and natural consequence, thus, the intention to cause death upon an objective investigation would have satisfied the requirement of Section 300 (c) of the Penal Code.

The accused was ordered to enter his defence for the said charge of killing the 27-year-old single mother, who worked as food catering operator by the Federal Court here on March 21, 2018.

The accused had called two witnesses for his defence, including himself while the prosecution had recalled its 23rd witness to challenge the testimony of a senior consultant forensic pathologist Dato’ Dr. Bhupinder Singh A/L Jeswant Singh, 67, who had given his evidence as second defence witness.

The Federal Court judges, who allowed the prosecution’s appeal against the acquittal of Ahmad Rizal, held that the High Court here and the Court of Appeal attached too much weight on break in chain of evidence.

The Federal Court judges also held that the subordinate courts had failed to take into account adequately the cumulative affairs of the circumstantial evidence, namely the accused had allegedly lodged a false police report as found by the trial judge, there was no sign of break-in at the deceased’s house, the accused was the last person at the crime scene, photofit as provided by the accused was allegedly a fabricated, injuries on the accused were not cooperative and his motive.

On July 22, 2014, the High Court here had freed the accused from the said charge without calling for his defence as the High Court ruled that the prosecution had failed to establish a prima facie case against the accused.

On January 26, 2016, the prosecution failed in their appeal at the Court of Appeal here as the court upheld the accused’s acquittal for the said offence.