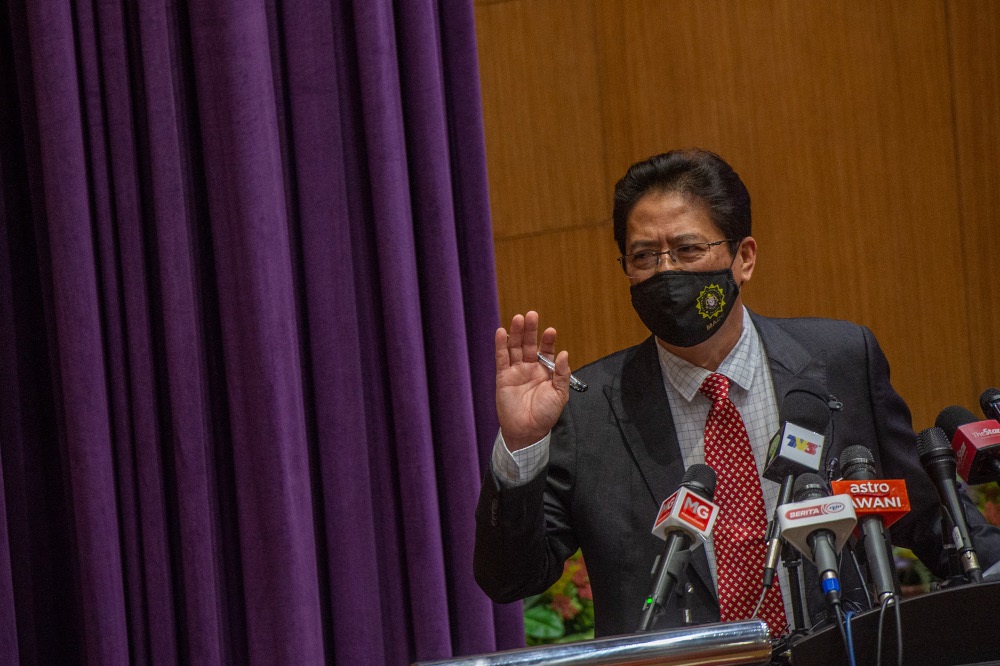 Azam speaks during a special press conference at MACC headquarters in Putrajaya on Jan 5, 2022. MalayMail photo

KUALA LUMPUR (Jan 13): The Securities Commission of Malaysia (SC) will be calling up the brother of Tan Sri Azam Baki for an interview over alleged violation of stock trading laws by the Malaysian Anti-Corruption Commission (MACC) chief commissioner.

According to sources familiar with the matter, Nasir Baki is set to give his statement to the regulatory body soon as to why and whether he chose to use his brothers share trading account to buy shares in 2015, since it was understood that he has his own trading account.

Malay Mail also understands that investigators will be looking into any financial transactions between the two brothers to determine whether an offence has been committed under the Securities Industry (Central Depositories) Act (SICDA).

When contacted, the SCs Corporate Affairs Department declined to comment on the matter but gave an assurance that a press statement would be issued in due course.

On January 5, Azam in a news conference admitted that he had allowed his brother Nasir to use his share trading account to buy the shares, but insisted he had not committed any wrongdoing and said he had no interest or benefit in those shares.

The MACC chiefs statement on January 5 triggered an SC investigation.

It is understood that the SC had not been informed of Azam authorising his brother to use his trading account up until Azams public disclosure on January 5.

Section 29A of SICDA also stipulates that all dealings in securities shall be effected only by the beneficial owner of the securities or an authorised nominee.

The law aims to prevent market manipulation and insider trading since a person with inside information could open multiple accounts and trade and share profits with account holders.

Azams admission of allowing Nasir to use his share trading account to buy millions of shares in two public-listed companies in 2015 could on the face of it constitute an offence under Section 29A of the SICDA, as noted in cases prosecuted by the SC previously.

In February 2018, Azuzay Zamani who holds an account at OSK Investment Bank Berhad was charged under Section 29A of the SICDA after he was alleged to have allowed Mohd Nor Abdul Wahid to effect the acquisition of 500,000 units of Three-A Resources Berhad shares on October 5, 2009.

In March the same year, Daniel Yong Chen-I who holds an account at CIMB Investment Bank Berhad was charged under Section 29A of the SICDA after he was alleged to have allowed one Ng Ee Fang to effect the acquisition of 1,000,000 units of Hirotako Holdings Berhad shares between October 14, 2011 and October 20, 2011.

However both the aforementioned cases have had their charges discontinued, subsequent to administrative enforcement action taken by the SC.

For their offences, both Daniel and Azuzay were punished with a fine of RM500,000.

The controversy erupted when Edmund Gomez, a political economics professor, resigned from MACCs Consultation and Corruption Prevention Panel last December 28 in protest against purported inaction over allegations of Azams ownership of the publicly traded stocks.

Azam has since denied allegations that he had control over many companies, including conglomerates, and described them as malicious accusations.

He has also filed a defamation suit against anti-corruption activist Lalitha Kunaratnam over her articles published in the Independent News Service (INS) news portal, a move which received condemnation from press groups. – MalayMail