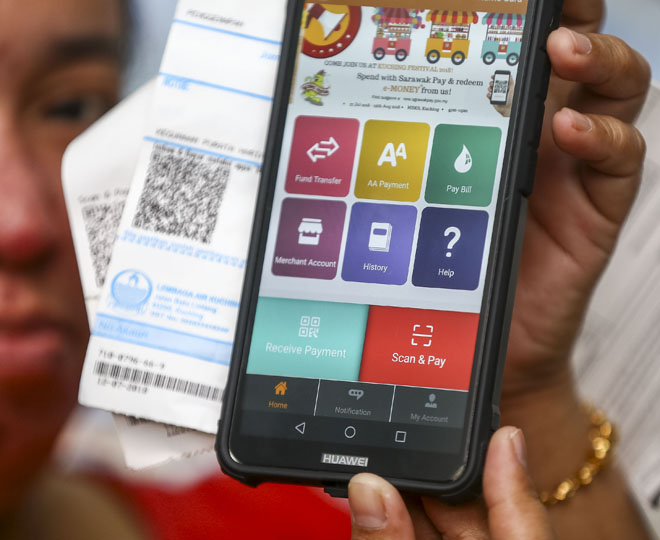 Many users who wanted to top up their e-wallet to enjoy the rewards had difficulty logging in to the app from as early as 7.45am this morning. – File photo

KUCHING: Sarawak Pay experienced congestion today as users flocked to the states popular e-wallet app for a chance to enjoy some double rewards offered by the app in conjunction with the Sarawak Day celebration.

Many users who wanted to top up their e-wallet to enjoy the rewards had difficulty logging in to the app from as early as 7.45am this morning.

Sarawak Multimedia Authority (SMA) general manager Dr Zaidi Razak said the Sarawak Pay Day Top Up Rewards Campaign has become quite popular among its users ever since it was launched on Sarawak Day last year.

We have more than 400,000 registered Sarawak Pay users and we anticipated that there would be congestion today.

The campaign was activated at 7am and there were no issues but from 7.45am onwards, when news of the campaign was circulated, a lot of people logged on to try and top up for a chance to enjoy the top-up rewards, he told The Borneo Post when contacted today.

He said SMA which manages Sarawak Pay, is working hard to rectify the situation so that more people would be able to enjoy the multiple top-up rewards of up to a maximum of RM50.

If the congestion persists, we are even looking at extending the campaign until tomorrow.

We have to be fair because we want everyone to be able to enjoy this event during the Sarawak Day celebration, he said.

Dr Zaidi also foresees that the campaign would attract more people to sign up for Sarawak Pay.

The campaign is part of our digital inclusivity programme to encourage more people to use the Sarawak Pay e-wallet. It also part of our efforts to stimulate the local economy.

Last year, we launched this campaign and this is the second year we are offering double rewards to our users.

The maximum reward is RM50 and every user who tops up will have a chance to be rewarded, he said.

He also extended his appreciation to users for their overwhelming support towards Sarawak Pay.