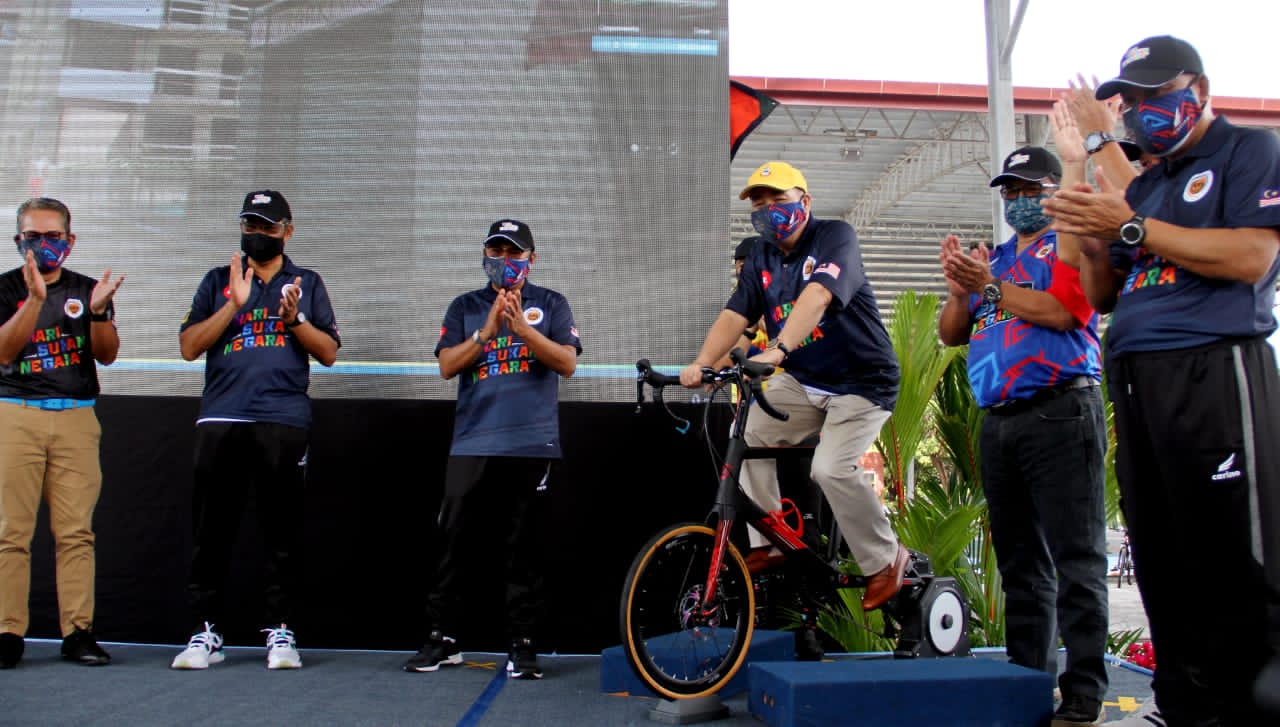 Hajiji performing the gimmick launch of the state-level National Sports Day 2021 on a stationary bicycle.

KOTA KINABALU (Oct 9): Support from independent assemblymen to the Gabungan Rakyat Sabah (GRS) government will help it to focus more on the state’s development and progress.

Chief Minister Datuk Seri Panglima Hajiji Noor said the GRS government is grateful to the independent assemblymen for pledging their support to it.

“We are therefore able to focus more on unity and development for the state and the rakyat,” he said.

Hajiji who was met after officiating the state-level National Sports Day celebration at the Kota Kinabalu Sports Complex on Saturday, said this when asked to comment on the support from independent assemblymen towards the realization of the state Government’s Sabah Maju Jaya (SMJ) halatuju.

On the resignation of Sindumin assemblyman Datuk Dr Yusof Yacob from Parti Warisan Sabah to become a government-friendly independent, Hajiji said that it is the special right of every state elected representative.

“They have the democratic right to choose where they want to serve or through which platform or party they desire,” Hajiji said.

On Friday, just four days after brushing off the claim, Yusof officially announced his resignation from Warisan.

The 66-year-old former Warisan information chief said he decided to become a government-friendly independent so that he can meet with the Chief Minister, Prime Minister and government officers whenever he wants to.

The former State Education and Innovation Minister pointed out that his current term may be his last chance to contribute to his constituents and he would not want to waste the remaining four years by shouting in the coffee shops.

He said that his constituency is currently facing numerous issues such as the Sabah Forest Industries dilemma, water supply issues, the Pan Borneo Highway project delay, the Sabah Oil and Gas Industrial Park.

Meanwhile, Hajiji said the National Sports Day program is the best platform to inculcate sports culture among the community to enhance the development of sports in the state.

He also expressed his happiness to see the commitment and high spirit of the rakyat in Sabah to celebrate the National Sports Day 2021 under the new norm.

Hajiji added that the re-opening of several sports activities in the state is definitely good news for those who love sports.

Therefore, take full advantage of any sports facilities provided and these activities are now allowed but remember to adhere to standard operating procedures (SOPs) set, he stressed.

According to Hajiji, the National Sports Day celebration is a platform to inculcate sports culture among the community and make Malaysia a sporting nation which is one of the government’s aspirations to realize the ‘Wawasan Kemakmuran bersama 2030’ other than being a platform for people’s unity and national unification.
Hajiji also asked the state Youth and Sports Ministry to continue to develop sports in the state so as to be able to produce athletes who make the country famous at the international level.

“In the 12th Malaysia Plan (12MP), presented by the Prime Minister, Datuk Seri Ismail Sabri Yaakob recently, the development of sports is among those given emphasis. Therefore, the state Ministry of Youth and Sports must take the opportunity in the 12MP to also develop sports in this country, “he said.

The Chief Minister said the National Sports Day celebration this year was slightly different because it was adapted to the current SOP enforced by the National Security Council and the Ministry of Health Malaysia.

The celebration this time was also celebrated in moderation without involving large gatherings and subject to the SOP set. Therefore, all National Sports Day events this time are implemented in a hybrid approach by using certain applications in the latest technology such as strava, garmin and nike run club among others,” he said.

This, Hajiji said, shows that the people of Sabah are not left behind to implement the Development of the Fourth Industrial Revolution or IR4.0 in all aspects, especially in the field of international sports.

When met by the media later, Hajiji said that under the Sabah Maju Jaya (SMJ), youth and sports development is one of the state government’s focus.

The state government through the Youth and Sports Ministry always conducts specific programs for youths to get involved in sports and also ensures that there are sufficient sporting facilities not only in the state capital but also in other districts, he stressed.