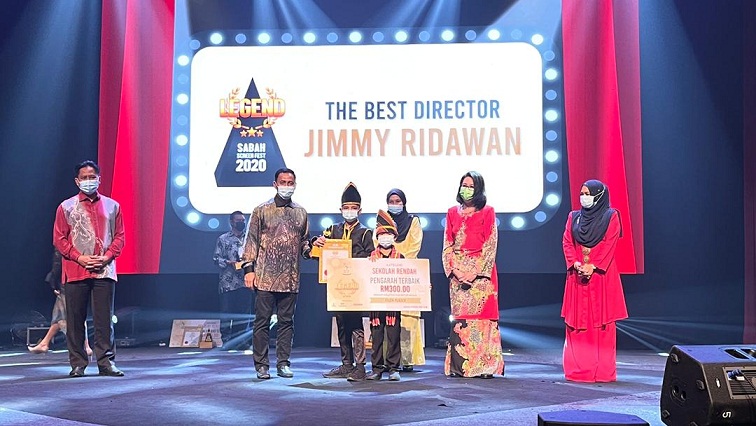 The Best Director winner, Jimmy Ridwan (third left) flanked by his team members and Yakub at the award ceremony.

KOTA KINABALU: A total of RM37,000 in cash prizes were offered in the Sabah Screen Fest 2020 which was held at the National Department for Culture and Arts near here recently.

The competition was divided into several categories. The first prize winner of the primary school category under the animation section was SK Pekan Sipitang which brought home RM1,000 cash along with three action cameras, a video editing software, a trophy and certificate for their entry Lagenda Terunggari Si Buaya Putih Kinabatangan.

And under the secondary school category, SMK Bahang Penampang emerged as the winner with their entry Gayo Nakan. The subsequent winners under the same category were SMK Bahang (Lagenda Terrunggari) and SMK Kinarut Papar (Lagenda Ulek Mayang).

Meanwhile, the winners for short films under the primary school category were SK Tampulan Telipok with their entry Lagenda Seniman followed by SK Kebagu Kota Kinabalu with Adal and SK Kg Jawa Tawau with Namaku Lagenda.

Under the Open category (advertisement), the winners were Dyan Claudine Undan Dumpangol for his entry The new lagenda Robin Hood which won the first prize, followed by Joel Chee Wei Jie who won the second prize for his entry Lagenda 1+1 and Ahmad Iman Danish Mohammad Azmi for his entry Kami Lagenda won the third prize.

The first prize for the documentary category in the open section went to Roziah Jalalid with the film Lepa Nipasil while Azmin Fatta with the entry Unvisible to the visible won the second prize and Rajimah Kasrin won the third prize with the entry 0199417284.

And under the short film category, the winners were Dyan Claudine Undan Dumpangol with the entry Huminodun: Ones Sacrifice’, Mohammad Azmi Awang Ladis with the film Antara Hujan and Mohd Faizal Kassim with Pangait Urban Lagenda.

A Special Award was also presented to Marc Abas for the film Avakas which has been featured in countries outside Malaysia.

The event was graced by Science, Technology and Innovation Minister, Datuk Yakub Khan who said that RM37,000 in cash prizes were offered in the competition.

He added that 55 productions involving 275 people were involved in the competition which carried the theme Lagenda or Legend.