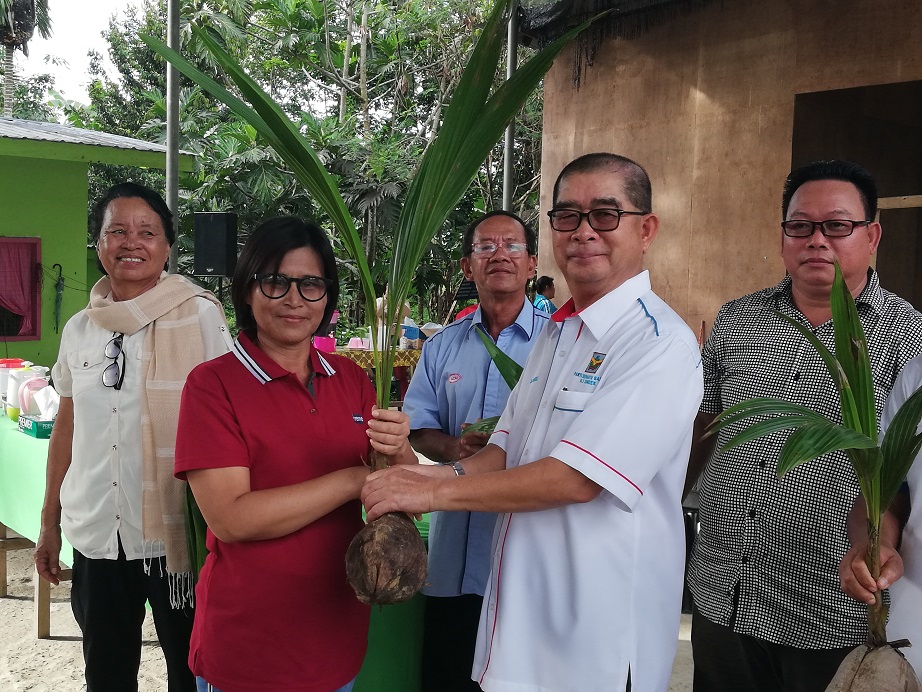 Parti Bersatu Sabah President Datuk Seri Dr Maximus Ongkili presenting souvenir to one of the participants of the economy and agriculture seminar at Kampung Talantang, Kota Marudu, on Friday.

While respecting the court’s decision, PBS President Datuk Seri Dr Maximus Ongkili expressed regret in respect to the basis upon the decision was derived.

“We (PBS) join the public view. In normal course of the pursuit of justice is to respect the rule of law and in the defence of the Constitution.

“In this case, it is a defence of the State Constitution. Unfortunately, the Court placed higher value in the expected outcome of the suit by saying it is academic. But that it is not the thrust of the suit brought by Tan Sri Musa Aman, he was more focusing on the point of law – whether the process of the appointment of Datuk Seri Mohd Shafie Apdal as the Chief Minister complied with the State’s Constitution,” said Ongkili.

Speaking during a seminar of economy and agriculture at Kampung Talantang, here, yesterday, the Kota Marudu Member of Parliament further said that the Court should not have made a decision based on new evidence stating that Shafie is the rightful Chief Minister because he has the most numbers of assemblymen and women supporting him, especially since this presumption is yet to be confirmed by actual voting in the Sabah State Legislative Assembly to establish the numbers.

“The rule of law must be respected, and of course, this is a defence of the Constitution. That is more pertinent and immediate, rather than looking at the outcome which is said to be ‘academic’.

“We regret that the Court’s decision failed to give premium to rule of law,” he said

Musa is expected to pursue justice at the Federal Court, to which Ongkili said PBS would also respect whatever decision that would be decided by the Court.

On another development, Ongkili said they were studying the possibility to file injunction on the proposed implementation of the controversial Sabah Temporary Pass, or PSS, in short.

“Our lawyers are studying the possibility of filing an injunction in Court on the implementation of PSS next year.

“In our view, entry into the Borneo states is only possible with the approval from both Sabah and Sarawak governments. The Federal Government has no unilateral power to make laws and regulations in respect of immigration in the two East Malaysian states without a formal consultation and agreement,” he pointed out.

He said the Sabah Government should adopt the Sarawak Government’s definition or formal consultation whereby it is not just getting the Chief Minister’s approval, concurring or simply agreeing on his own or through the cabinet.

“In Sarawak’s case, it must be tabled during their State Legislative Assembly, and votes on the motion must be conducted. This way, such an important decision, would reflect the voices of the people,” he said.

He added that the PBS Gerakan Belia dan Beliawanis Bersatu would be doing roadshows to educate the people on PSS and its implications.