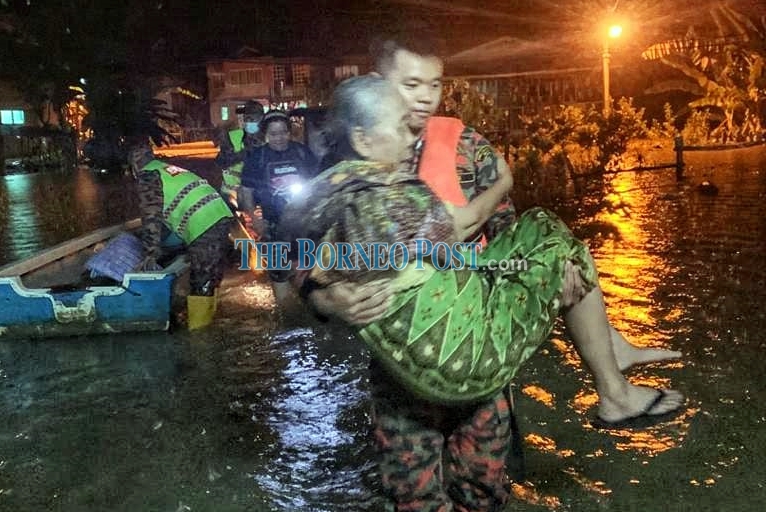 A fireman helps to evacuate a senior citizen to her relative’s house following the rising water level.

SIBU (Sept 14): The residents of the 23-door Rh Philimon in Nanga Bawai, Kapit have been evacuated to the nearby school SK Nanga Bawai due to the rising water level.

According to the information from the Sarawak Fire and Rescue Department Operations Centre, a team of firemen from Kapit fire station was deployed to render assistance.

At 6.20am (today), the fire station in Kapit reported that they received a notification from the longhouse chief that the residents have been evacuated to SK Nanga Bawai, which is just nearby the longhouse as the water level is rising compared to only 0.5 metres yesterday, the statement said.

The 23-door Rh Philimon with 126 residents is located about 20 kilometres (KM) from Kapit town.

It is still uncertain on the number of residents who were evacuated.

On Sunday night, the water level at Kampung Muhibbah in Kapit had reached 0.3 metres and affected 16 houses there.

In Kampung Baru, firemen had advised those affected to move to their relative’s house after receiving a report on the rising water level.

At around 11pm, fireman helped to relocate a senior citizen and her daughter in the village to their relative’s house.

Over in Kanowit, several roads have been inundated today following incessant rain, causing them to be impassable to vehicles.

Monitoring is being carried out from time to time, the statement said.

In Sibu, Jalan Khoo Peng Loong has been partially inundated, while certain portions of Jalan Lanang are also slightly inundated.

At Jalan Salim Stabau, the flood waters are still rising, where the road is only passable to larger vehicles.

Residents of 23-door Rh Philimon in Kapit evacuated to nearby school due to rising water level Borneo Post Online.