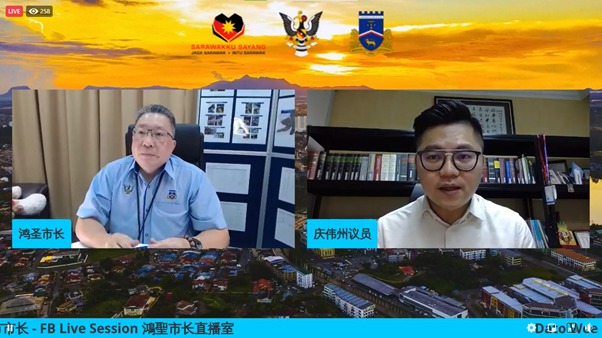 A screengrab of the Facebooks live session between Wee (left) and Wong today.

KUCHING (Nov 21): Areas in Padungan should be rejuvenated by taking its cultural and historical heritage into consideration, said Padungan assemblyman Wong King Wei.

He felt that it was not necessary for Padungan to undergo a massive transformation, as it contains a rich history that should be preserved in the drafting of its development plans.

Wong, who had recently announced his retirement from politics, said Padungan had the potential to be developed into a social hub, where people could relish in its history, heritage, cultures, food and recreational activities that the historical places could offer.

Instead of spending time in shopping malls, visiting Padungan is just like travelling back to history and I personally hope there would be a few car-free days a month, where selected locations would be car-free for a certain period for the purpose of recreational activities, he said.

Meanwhile, Wee concurred that the historical-rich Padungan could be developed as part of the smart and healthy city planning in consideration of its historical significance and remarked that Padungan had always been the heart of MBKS.

Next year, we are working together with Sarawak Tourism Board to bid for the United Nations Educational, Scientific and Cultural Organisation (Unesco) Creative Cities of Gastronomy title for the Kuching city, said Wee.

Nonetheless, Wong thanked voters of Padungan for supporting and assisting him for the past nine years as their elected people representative and he stressed again his choice to leave politics was a personal one.

I am ever-willing to provide my assistance to whoever is elected as the state assembly member for Padungan and I have no intention to join any political parties or return to politics anytime soon, at least not under the current political climate, said Wong.

The two-term Padungan assemblyman said he could maybe play his role for the betterment of the city via a non-government organisation platform and he regarded politics as a toxic instead of a vitamin to his life.

I dont want to paint politics in a bad image. Dont take my wrong, I am still very interested and passionate about politics but just that I have no plans to return to politics in the current environment, said Wong.