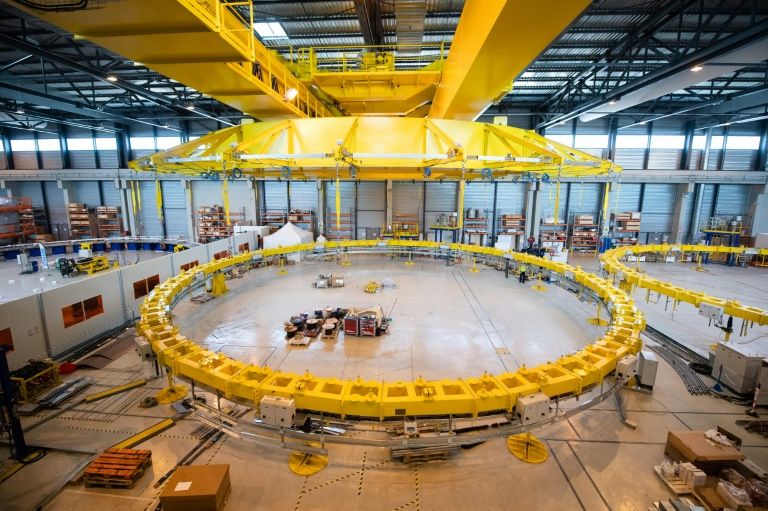 The ITER project aims to demonstrate that fusion power can be generated sustainably, and safely, on a commercial scale. – AFP photo

SAINT-PAUL-LES-DURANCE, France: Fourteen years after receiving the official go-ahead, scientists on Tuesday began assembling a giant machine in southern France designed to demonstrate that nuclear fusion, the process which powers the sun, can be a safe and viable energy source on Earth.

The groundbreaking multinational experiment, known as ITER, has seen components arrive in the tiny commune of Saint-Paul-les-Durance from production sites worldwide in recent months.

They will now be painstakingly put together to complete what is described by ITER as the “world’s largest puzzle.”

The experimental plant’s goal is to demonstrate that fusion power can be generated sustainably, and safely, on a commercial scale, with initial experiments set to begin in December 2025.

Fusion powers the sun and other stars when light atomic nuclei fuse together to form heavier ones, releasing huge amounts of energy in doing so.

The challenge is to build a machine which can harness this energy which is meant to be held in place in the reactor vessel and controlled by an immensely strong magnetic field.

“With fusion, nuclear holds promise for the future,” French President Emmanuel Macron said in a message broadcast to an event Tuesday to mark the official start of assembly.

As a technology, it promises “clean, no-carbon, safe and practically waste-free energy,” added the president, who has long advocated nuclear power in the global fight against climate change driven by the greenhouse gases produced from the burning of coal, oil and natural gas.

South Korea’s President Moon Jae-in, for his part, hailed “the biggest international science project in human history,” which he said offered hope of a clean, safe energy source as soon as 2050.

The ITER project was launched in 2006 by 35 countries including the United States, Russia, China, Britain, Switzerland, India, Japan, South Korea and the 27 members of the European Union.

“Fusion is safe, with minute amounts of fuel and no physical possibility of a run-away accident with meltdown” as with traditional nuclear power stations, the partners said in a statement.

A further advantage: the fuel for fusion and lithium to help manage the reaction is found in seawater and is abundant enough to supply humanity for millions of years.

“A pineapple-sized amount of this fuel is the equivalent of 10,000 tonnes of coal,” the partners said.

ITER, the world’s largest experimental fusion facility, is meant to produce about 500 megawatts of thermal power, equivalent to some 200 megawatts of electric energy if operated continuously, enough to supply some 200,000 homes.

Its “Tokamak” nuclear fusion reactor will comprise about a million components in all, some like its hugely powerful superconducting magnets standing as high as a four-floor building and weighing 360 tonnes each.

Some 2,300 people are at work on site to put the massive machine together.

“Constructing the machine piece by piece will be like assembling a three-dimensional puzzle on an intricate timeline,” said ITER’s director general Bernard Bigot.

“Every aspect of project management, systems engineering, risk management and logistics of the machine assembly must perform together with the precision of a Swiss watch,” he said, adding: “We have a complicated script to follow over the next few years.”

Once finished, the reactor should be able to recreate the fusion processes that occur at the heart of stars at a temperature of some 150 million degrees Celsius, 10 times hotter than the sun

It could reach full power by 2035, but as an experimental project, it is not designed to produce electricity.

If the technology proves feasible, future fusion reactors would be capable of powering two million homes each at an operational cost comparable to those of conventional nuclear reactors, Bigot said.

Such “artificial suns,” however, are criticised by environmentalists as a cripplingly expensive scientific mirage.

The ITER project is running five years behind schedule and has seen its initial budget triple to some 20 billion euros ($23.4 billon). – AFP