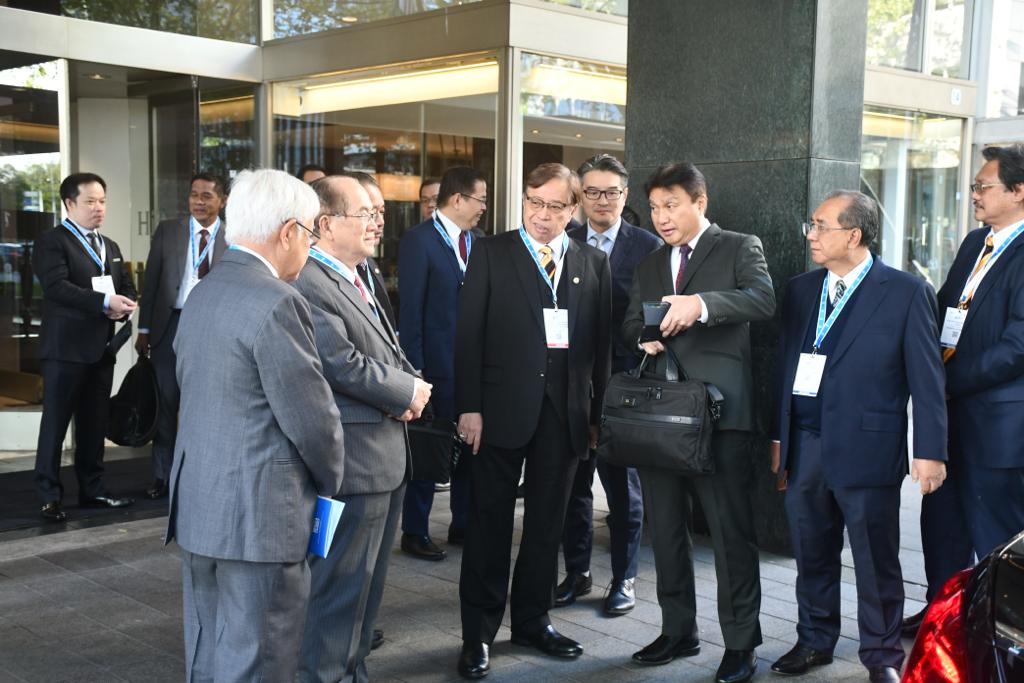 Abang Johari (third right) sharing a light moment with other members of the Sarawak delegation.

To further accelerate Sarawaks Green Energy Agenda, I am proud to announce the Sarawak government is exploring sustainable aviation fuel to sustainably produce jet fuel that will contribute to the reduction of carbon emissions across its life cycle beyond 80 per cent compared to fossil fuels, he said in his keynote address at the World Hydrogen 2022 Summit and Exhibition at the City of Rotterdam in the Netherlands today. 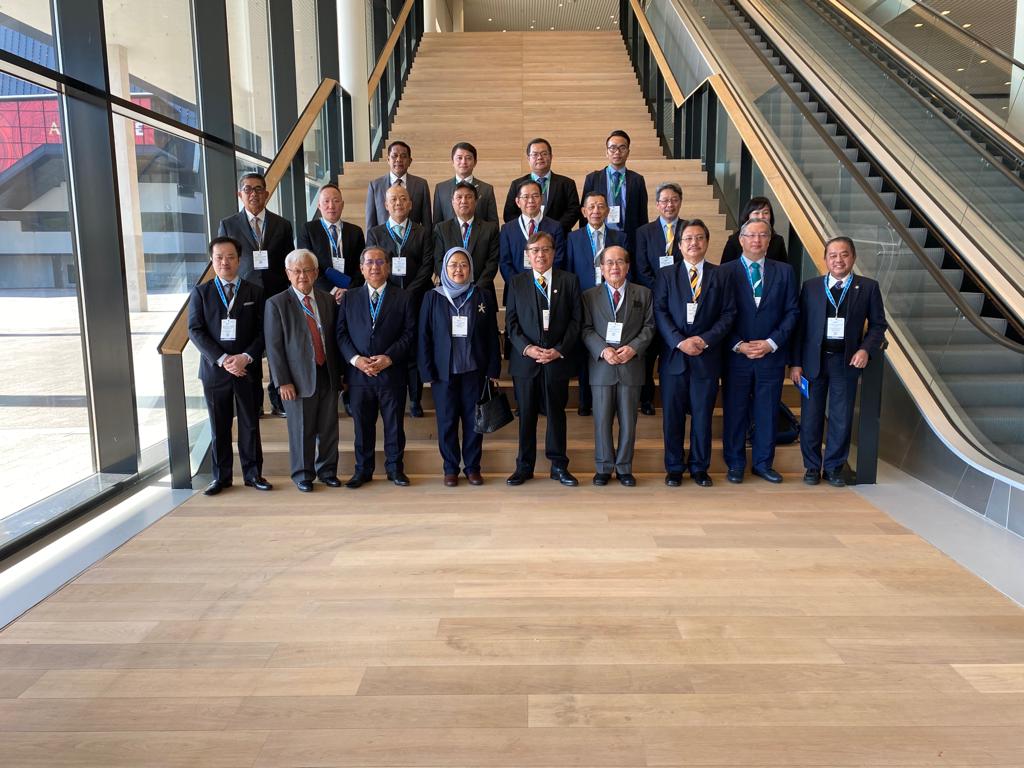 Abang Johari (centre, front row) in a group photocall with other members of the Sarawak delegation.

He explained alternative aviation fuels such as SAF could be the key to sustainable air travel and could contribute hugely to the industrys emissions-reduction strategy and net-zero emissions goal.

Through our development and investment agency Sarawak Economic Development Corporation (SEDC) Sarawak, we are collaborating with the Aerospace Malaysia Innovation Centre (AMIC) in the development of bio-fuels, green hydrogen and fuel cells for aviation.

Abang Johari, who is also Minister of Finance and New Economy, said the state government wants to work together with the aviation industry, as well as the marine industry, to accelerate efforts and enhance the development of SAF, bio-fuels, e-methanol and the potential of hydrogen fuel cells.

He also said the time was right to tap into hydrogens immense potential in playing a key role for a clean, secure and affordable energy future.

Going back to the question of Wherein lies the balance between protecting the environment and growing the economy, I can safely say that truly there is no real option only real actions. I believe if we all work to accelerate hydrogen markets in a coordinated way, it can help spur investments in integrated facilities and infrastructure that will bring down costs and enable the sharing of knowledge and best practices.

He said the global trade of shared commodities would also benefit from common international standards that will ultimately stimulate commercial demand for hydrogen and thus, he welcomed collaborations to contribute further to the body of knowledge regarding hydrogen technology and its application especially in a tropical environment to accelerate its growth.

Abang Johari also told his audience that Sarawak is a rising tiger in the renewable energy arena.

Sarawak is Hydrogen Ready and we are opening our frontiers to help traditional industries become more sustainable. When the world was in various states of flux during the pandemic, Sarawak developed our Post Covid-19 Development Strategy 2030 where we specifically highlighted renewable energy as a cornerstone in our 10-year plan. In fact, it is more than our internal blueprint to shape our economy. It is a multi-faceted approach towards long-term economic, social and environmental sustainability and is built upon our aspirations for collaboration with policy-makers and private sectors both within and beyond our humble island.

When I say Sarawak is Hydrogen Ready, I am essentially saying the Sarawakian hydrogen economy is at its heart building an ecosystem where our resources are in abundance, infrastructure is sufficient, expertise is available and the supply and value chains are well-established. With concerted effort and real initiatives, Sarawak is sending a clear message across the world we want Sarawak to be a region for clean, green investment. We want global, low carbon industries serviced by Sarawak supply chains, he said.

He said Sarawak is currently Malaysias largest provider of renewable energy for a population of almost three million across Sarawak and parts of Indonesia in West Kalimantan.

In fact, 70 per cent of the total generation mix is from Sarawaks hydropower resources which can be harnessed to produce low carbon hydrogen. This provides an ideal setting for enabling the hydrogen economy in Sarawak, hence hydrogen research studies were initiated as pioneering steps to explore, innovate and produce green hydrogen as a solution for the commercial and public application of hydrogen and fuel cell technology, he explained.

He added renewable energy such as green hydrogen produced from hydropower resources, Sarawak has the equation to produce green ammonia and through this innovation of green hydrogen to make a key impact in energy transition, Sarawak has developed new effective strategies to reduce the reliance on fossil fuel and lower carbon emissions by introducing clean fuel as an alternative for the public transportation sector.

Sarawaks power utility company, namely Sarawak Energy Berhad (SEB), is currently exploring the exciting frontiers of producing green hydrogen as a solution for the commercial and public application of hydrogen and fuel cell technology. NEXO Fuel Cell Vehicles are a riveting component under our auto-expansion strategy with Hyundai, tying in with the hydrogen buses in the latest foray towards greening Sarawaks public transportation, he said.

On top of that, SEB successfully established Southeast Asias first Integrated Hydrogen production plant and refuelling station in 2018, being able to produce 130 kilogrammes (kg) of hydrogen per day at close to 100 per cent purity.

It now serves as a refuelling station for Sarawaks hydrogen fuel cell electric buses, capable of supporting and fully refuelling up to five fuel cell buses and 10 fuel cell cars per day.

With this pilot hydrogen facility, Sarawak is a step towards building a green energy future for the transportation sector for Sarawak and the Asia Pacific Region, he said, adding the station now serves as the refuelling station for Sarawaks first hydrogen fuel cell electric buses.

As a continuous effort to realise Sarawaks ambitions to be the main hydrogen-producing hub within the region, SEB in 2020 signed a Memorandum of Understanding with leading organisations Petronas, Chiyoda and Mitsubishi to explore the hydrogen export potential.

“We have indeed come a long way since hydrogen proof of concept by SEB in 2018. Sarawak also partnered with global players from South Korea to develop environmentally friendly hydrogen and green ammonia plant at our industrial town, Bintulu.”

“We have recently introduced hydrogen modules at our universities in Sarawak to equip our future engineers to specialise in this industry, along with various research programmes and projects with the likes of Airbus and Japanese firms to test its applications in our day-to-day life,” said Abang Johari.