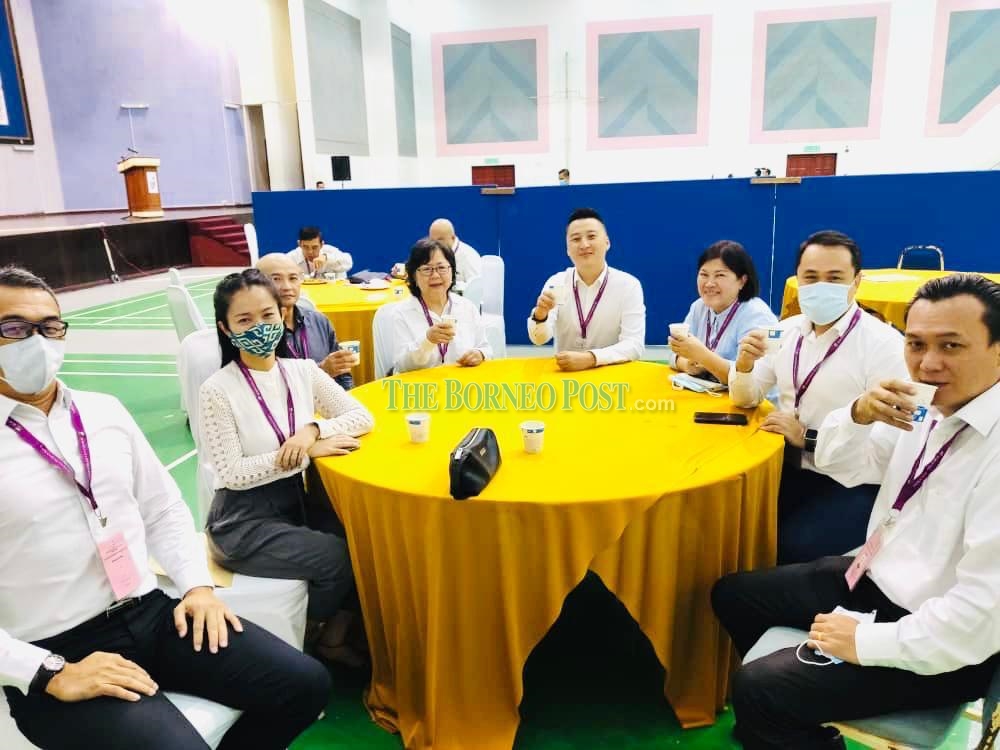 The Likas candidates enjoying their coffee break together at the nomination centre before the race heats up.

KOTA KINABALU (Sept 12): The seven candidates vying for the Likas state seat have demonstrated their commitment for a clean and fair election by setting up a chat group on WhatsApp called, Clean Likas.

Independent candidate Melanie Chia, 63, said they agreed to create the chat group when they sat together and had a friendly conservation during the coffee break at the nomination centre.

“Amongst the topics we discussed was that most of us want to see a clean fight in Likas and Jeff from PCS immediately set up a chat group for the seven of us entitled ‘Clean Likas’, she said, referring to Parti Cinta Sabah (PCS) candidate Jeff Lu.

“Most Malaysian in Sabah would want to see a clean election and we agreed to fight fair and square in the Likas election.

“We all hope the dirty and slanderous tactic used by the (Democratic Action Partys) Red Bean Army in the previous election will not be repeated in this election.

Of the seven candidates, only Tan and Chia have contested in an election before.

Before entering the nomination centre, Tan told the media that his track record in the constituency spoke for itself.

The DAP Sabah assistant secretary said he had even extended his service to people outside his constituency, including Penampang and Putatan.

He hoped that the state polls would put a stop to the political frog culture in Sabah.

Chia is the most experienced politician of the lot with a political career that spanned more than 20 years.

She was a founding member and deputy president of Sabah Progressive Party (SAPP).

In August this year, Chia quit SAPP as she felt that the party’s current direction has deviated from its initial approach of upholding Sabah rights and autonomy.

She was elected as Luyang assemblyman in the general election in 2004 and 2008, as well as served as the assistant finance minister of Sabah in the past.
When contacted, Chia was personally happy to see the young and new faces in Likas.

“I felt so encouraged to meet these young candidates as it means hope for me, hope for Sabah that the democratic process can be at work, she said.

Meanwhile, Sim, 39, who leads the LDP Central Youth Movement, aspired to serve the constituents in Likas.

“Likas is my home. If given the mandate, I will take care of the people in Likas like my own family. I hope the voters will give me an opportunity to serve them.”

Lu, 37, an entrepreneur and a first-time candidate, aspired to bring economic growth, security and youth empowerment in Likas.

Usno’s candidate, Hoong, 36, a Sino-Kadazan, has a finance and management background.

He previously worked at a public-listed company in China for three years and was the regional sales and marketing for Neo-Neon Holdings in Australia.

He aspires to bring progress to Likas, the place where he grew up, and to unite and empower Sabahans.