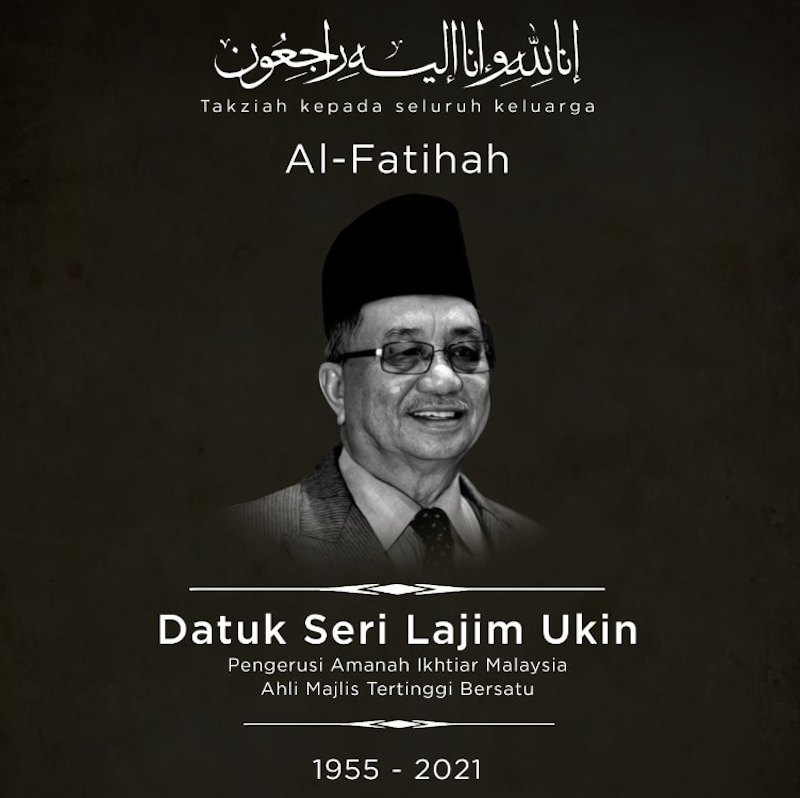 KUALA LUMPUR (Aug 29): Casting aside their ideological differences, politicians in Malaysia offered their condolences to the family of Sabah politician Datuk Seri Lajim Ukin who died this morning from Covid-19-related complications.

My family and I wish the deepest condolences to the family of the late (Lajim) following the passing of a loved one. May they remain strong through these upsetting times, Muhyiddin said on his Facebook page.

As a member of Bersatus Supreme Council, the late (Lajim) was someone who was a friend and comrade which I knew for a long time and we have served together serving in the previous government, Muhyiddin added.

The Opposition were also quick to offer their condolences. From PKR, president Datuk Seri Anwar Ibrahim and his wife and former deputy prime minister Datuk Seri Dr Wan Azizah Wan Ismail penned their condolences separately on their own Twitter accounts.

I am deeply saddened and pray for his spirit to be placed among the faithful, Anwar tweeted.

God is the almighty he created every single thing. He also will call to return to him when it’s time, Tangau tweeted.

Lajim tested positive for Covid-19 on August 12 and was admitted to KPJ Sabah Specialist Hospital in Kota Kinabalu on August 14.

Doctors put him in a medically induced coma on August 24. He died at about 6am today at age 66.

Lajim, a former Beaufort MP, was originally an Umno member before quitting the party in 2012 to declare his support for then Opposition bloc Pakatan Rakyat.

He then went on to form his own Sabah-based party which was later dissolved and absorbed by Bersatu, where he was later made the partys election director and its supreme council member.

He was also the executive chairman of Amanah Ikthiar Malaysia. – Malay Mail