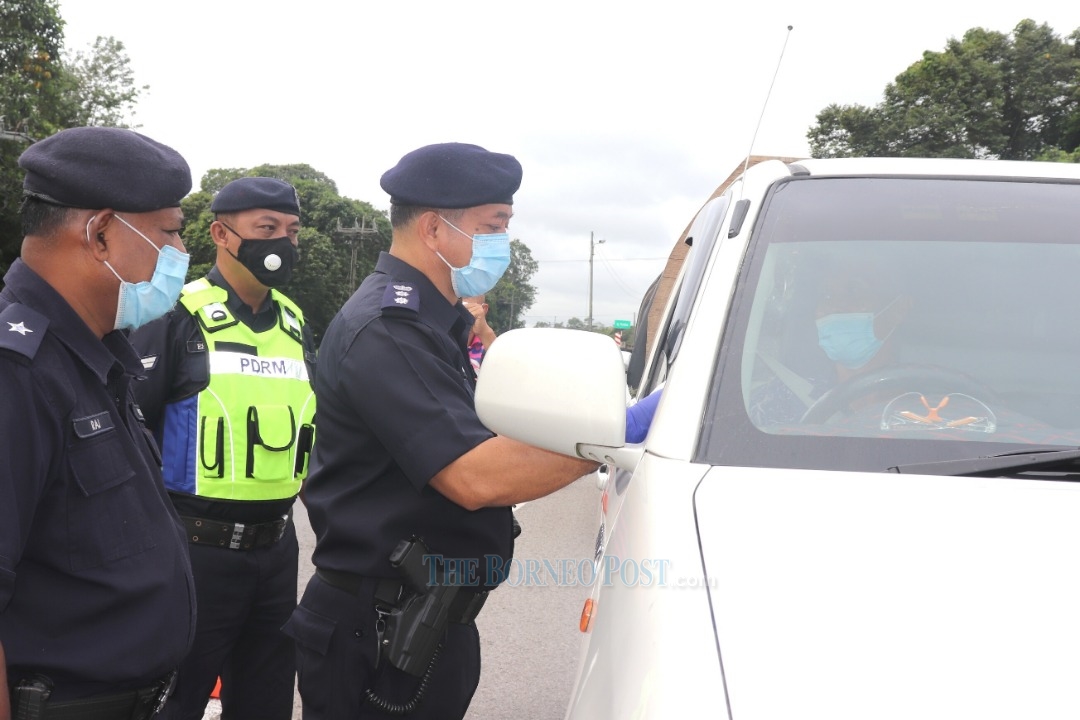 Stanley (second left) checking the details of a driver at the CMCO road near the Paradom roundabout in Sibu.

SIBU (Jan 13): No personnel at the Sibu police headquarters has tested positive for Covid-19, said Sibu police chief ACP Stanley Jonathan Ringgit after a policeman based in Kanowit was confirmed to have been infected.

He told reporters today that his personnel here had undergone the swab test for the virus but their results had so far returned negative.

Stanley said the Kanowit personnel who tested positive had attended a funeral at Rumah Langi Ambau@Douglas in Pasai Siong.

“He got tested after the emergence of Pasai Cluster and his result was positive. I was also informed that all 12 Covid-19 positive cases in Kanowit (yesterday) are connected to the Pasai Cluster,” he said when met when inspecting a road at Paradom roundabout here.

On the enforcement of the Conditional Movement Control Order (CMCO) in Sibu, Stanley said that they had set up 24-hour roads at four locations.

The locations are at the road leading to eight longhouses including Rumah Langi Ambau@Douglas in Pasai Siong which started on Jan 9, at Mile 12 Jalan Oya, at Paradom roundabout and at Jakar in Sarikei.

“The police are assisted by the army at the roads. Four policemen and 12 soldiers will be stationed at each road location. They will be on duty on shift basis daily throughout the CMCO,” he said.

He also said the public have started to go to police stations in Sibu to apply for the inter-district travel permit.

“For now we will still allow those without permit who have to go through Sibu to reach their destinations,” he said.

He also warned that they will arrest those found violating the quarantine order.

The State Disaster Management Committee (SDMC) has implemented the CMCO in Sibu, which includes Sarikei; Kuching, including Serian and Samarahan, from today until Jan 26 to stem the increase in Covid-19 cases.

The divisions have been classified as Covid-19 red zones as they have recorded more than 40 cases each in a two week period.

The Health Ministry classified areas with no cases as green zones, 1 to 20 cases as yellow zones and 21 to 40 cases as orang zones.