Usno pledges to strengthen aims of setting up GRS 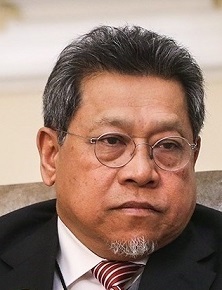 KOTA KINABALU (May 10): United Sabah National Organization (Usno) pledged to contribute as much as possible in terms of its energy and suggestions so as to strengthen the objectives of the establishment of Gabungan Rakyat Sabah (GRS).

In this aspect, Usno remains committed to fighting for the New Deal after the party was accepted as a member of GRS, said its president, Tan Sri Pandikar Amin Haji Mulia.

“I see the objective of establishing GRS under the leadership of Sabah Chief Minister Datuk Seri Panglima Hajiji Mohd Noor is in line with the ideology of the Usno’s struggle, the New Deal or New Negotiations,” he said in a statement on Tuesday.

Among others, the ideology of the New Deal encompasses the idea that the political and power relations between the state government and the federal government should be placed in a new position in line with current demands.

In other words, the federal government must develop the state of Sabah with the same sincerity as the level of development implemented in the states in Peninsular Malaysia,” Pandikar said.

The veteran politician added that at the political level, political leaders in the Peninsula must see politics in Sabah as unique and not the same as politics there.

In other words, state politics must be ‘colored’ by Sabah’s leaders themselves without the pressure from the Peninsula, he stressed.

Pandikar in his statement thanked and expressed appreciation to GRS for accepting Usno as a new member of the coalition as it is a recognition of Usno’s struggles.

Thank you for the trust given to Usno to join GRS as a partner in fighting for the interests of the people of Sabah. Usno will continue to play an active role as a local party committed in its struggle to succeed in the new negotiations,” he said.

Pandikar added that he is confident Usno will be able to work even harder under the leadership of GRS chairman Datuk Seri Panglima Hajiji Mohd Noor.