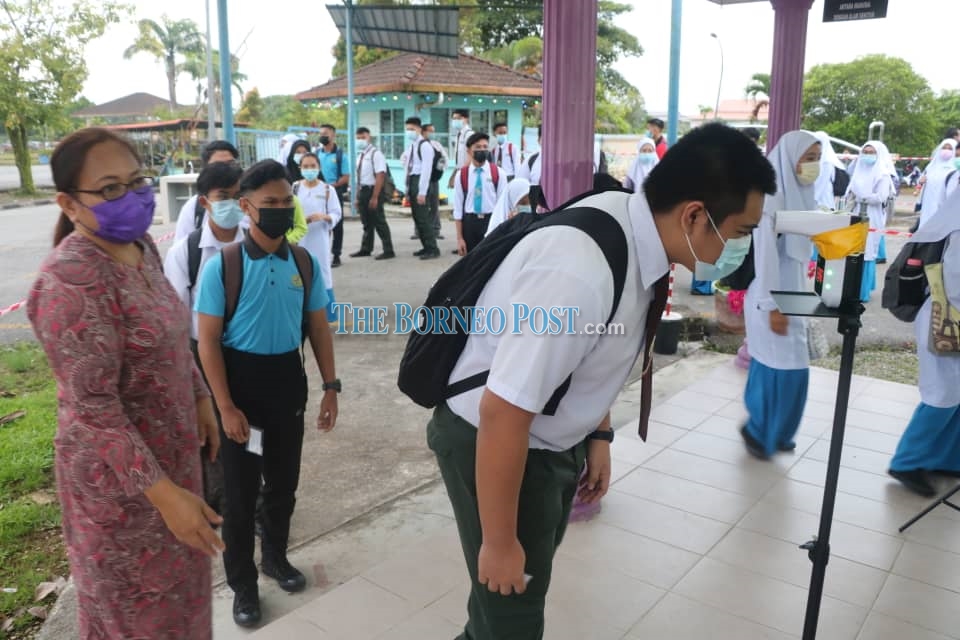 A SMK Kota Samarahan student is seen taking his body temperature before entering the school.

Observations conducted by The Borneo Post at SMK Penrissen No 1 this morning found that students were lining up as early as 6am to enter the school.

Several teachers were seen stationed at the school entrance to ensure that the students comply with the existing standard operating procedures (SOP) such as wearing face masks, practicing social distancing, having their body temperatures checked and scan the QR code before entering their respective classrooms.

Security guards were also seen directing traffic to ensure smooth traffic flow as parents dropped off their children at the school.

Meanwhile at SMK Kota Samarahan, it is learnt that the school sessions were divided into two sessions; morning and afternoon sessions.

An observation conducted by Utusan Borneo in Samarahan this morning found that 881 students were in the morning session, while 1,448 students would be studying in the afternoon session.

Much like at SMK Penrissen No 1, students at SMK Kota Samarahan were also compliant with the SOP.

When met, 51-year-old Osman Suni said he welcomed the resumption of physical classes as the students could better focus on their studies and that they could directly ask questions to the teachers.

“Of course I worry about my children’s safety, but with the SOP set by the government, I am confident that their safety is taken care of,” the father-of-three added.

Osman, whose two children currently studying at SMK Kota Samarahan, said the implementation of physical classes could reduce the burden of parents especially those from low income group as well as those residing in areas with low Internet coverage.

“Aside from the low Internet coverage, there are parents who are unable to provide the means for their children to study online such as smartphones and laptops. As such, this physical classes can solve the problem,” he added.

An SMK Kota Samarahan student, 14-year-old Aizatul Nabila Suhaidi expressed her excitement over being able to return to school.

She added that she was excited to meet her classmates face-to-face.

“I am happy because it has been so long since my classmates and I have met and studying together,” she added.