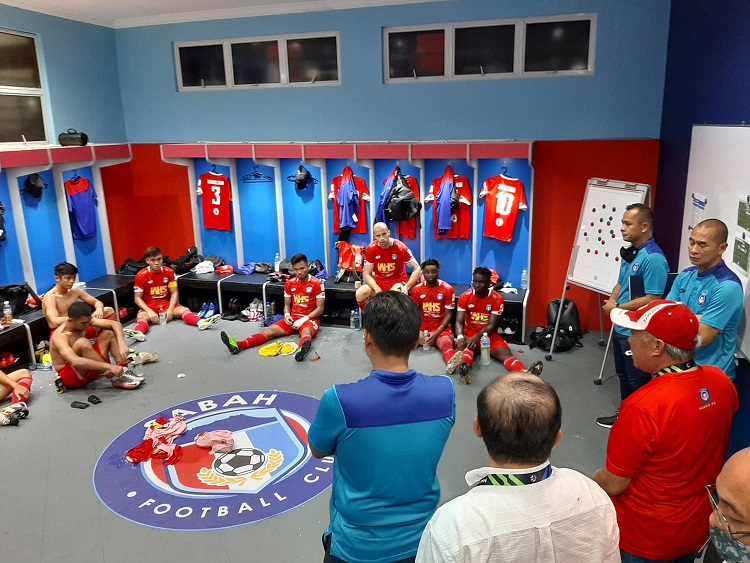 Bung Moktar (in red cap) gives the players a pep talk during half time break at the Super League match against JDT here on Tuesday.

KOTA KINABALU: Datuk Seri Bung Moktar Radin said Sabah FC players must show greater fighting spirit if they were to be a force to be reckoned with in the Super League challenge.

The acting president of Sabah Football Association (Safa) said regardless of who they were up against, the players must always show their fullest commitment in order to get the desired result.

“I want the players to have the fighting spirit so that we will be even more convincing when on the pitch.

“To have the will to fight is very important in any game, more so when we face a quality or much stronger team.

“I know the players have given their best but what is needed is for the team to perform to their maximum best,” he said in a statement to the press on Wednesday.

Bung Moktar made the remark as he made his way to the squad dressing room and gave the team a pep talk during the half time break of the match against Johor Darul Ta’zim (JDT).

He was understandably frustrated by the way Sabah FC performed in the first half where not only did the squad conceded two early goals, they were made to chase shadows for much of the opening half.

The pep talk did rejuvenate the squad when they emerged for the second half action, and managed to reduce the deficit through Levy Madinda’s penalty kick in the 55th minute.

The joy was however short lived as Sabah were reduced to 10-man after Maxsius Musa was shown a second yellow card, thus handing JDT a clearer path to claiming all three points.

JDT had taken the lead through Mohd Afiq Fazail and Bergson Da Zilva goals inside the first 10 minutes of play before Da Silva and Leandro Sebastian Velasquez added more goals after the sending off.

Meanwhile, head coach Kurniawan Dwi Yulianto admitted the absence of an experience head in the middle of the park in particular had been costly for Sabah.

The Indonesian trainer was forced to pair youngster Mohd Syukri Baharun and Ricco Nigel Milus in the absence of the suspended Park Tae Su and the unfit Azzizan Nordin.

The move failed to paid off.

“We sent on Syukri and Ricco, who have been with us since last year but whose time on the pitch were limited…we knew there was always a risk.

“We have Amri (Yahya) but we need him at 100 per cent. The plan was to bring in Amri in the second half and hope that his experience would bring a positive impact and help us to have a better control of the game.

“However it did not work out as planned, although we did have some positive moments early in the second half…we started aggressively and tried to increase on our tempo.

“The sending off was a big blow to us especially when we had just scored a minute earlier. It just made the game even tougher for us,” said Kurniawan after the game.

With their fourth defeat of the season, Sabah dropped to ninth in the 12-team table with five points from one win and two draws.

The Rhinos are set for another tricky league fixture when they take on current third place team Penang FC at the Bandaraya Stadium in Penang on April 9.