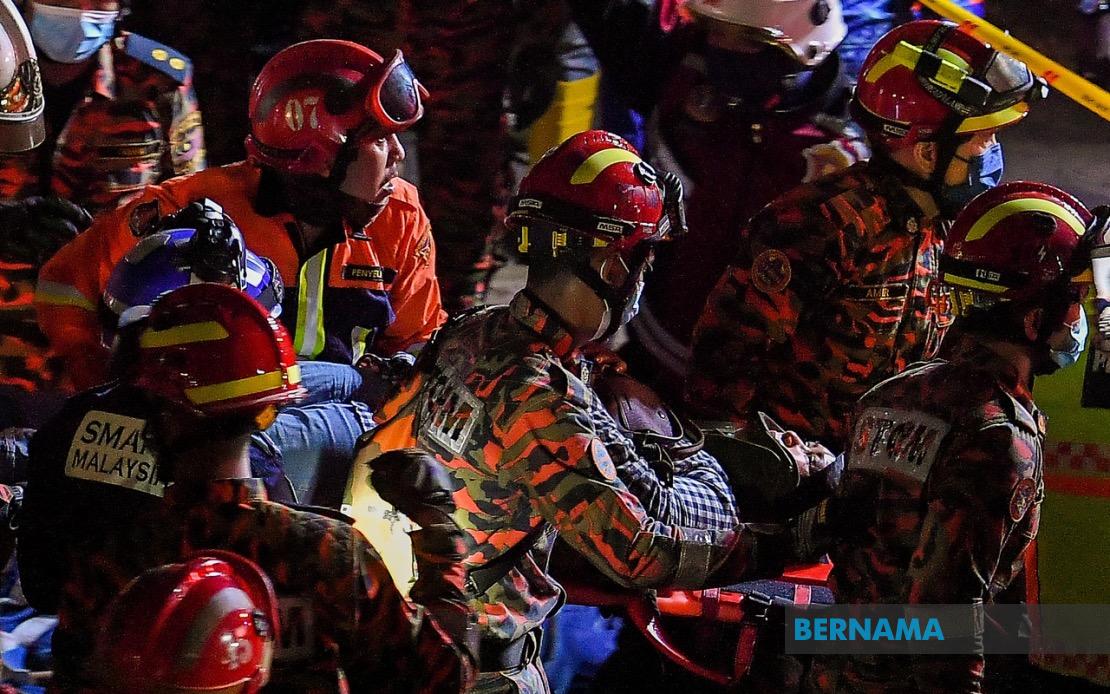 The fire department took more than three hours to extricate the victims including deploying a crane. Bernama Photo

KUALA LUMPUR: Two women died while three more were severely injured after the van they were travelling in was crushed by an overhead bridge structure which collapsed in an incident at Desa Tun Razak, here yesterday evening.

Kuala Lumpur Traffic Investigation and Enforcement Department head ACP Zulkefly Yahya said in the incident at 5.58 pm, the van was passing through Middle Ring Road 2 (MRR2) and two victims were killed at the scene.

He said the five victims aged between 30 and 45 were locals.

The van driver who was seriously injured was brought out at 8.55 pm while the last victim was rescued at 9.27 pm.

The injured victims were taken to Tuanku Muhriz Hospital for treatment, he said when met at the incident location.

He said police had earlier received a report that a trailer hit the iron scaffolding of the Sungai Besi-Ulu Kelang Expressway (SUKE).

He said the trailer driver who is a local had lodged a police report and was detained to facilitate investigation under Section 41(1) of the Road Transport Act 1987.

He said firefighters have to be cautious as a second collapse may occur.

Firemen used three cranes to remove the collapsed structure on the van before succeeding to get all victims out, he said.

The incident also caused the road to be closed which resulted in a two-kilometre long traffic jam.

A resident who lived near the incident location, Zamirullah Sudin, in his 40s said he heard a loud sound like a thunder when he was at home before seeing the construction structure collapsed.

After seeing the falling bridge, I rushed to the location and found many people had gathered there. The accident also caused a two-kilometre long jam as the crash happened in the middle of the road, he told Bernama.

Another witness who only want to known as Haun, in her 20s said in the incident when she was at home and also heard a very loud sound.

I live in an nearby flat and I came out to see what happened, she said. — Bernama