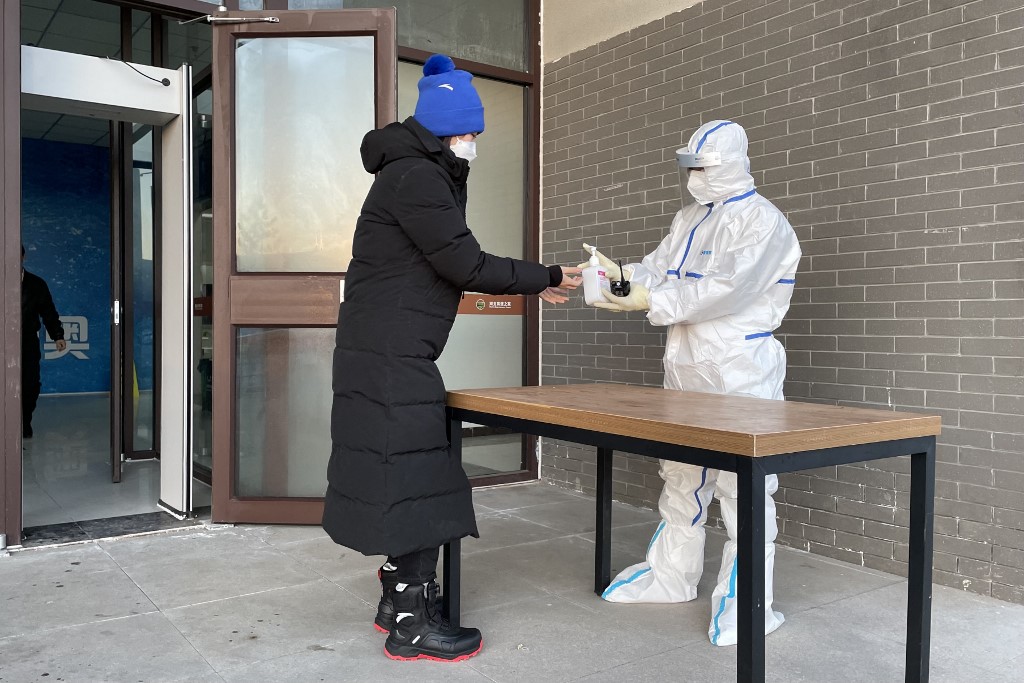 A man in protective gear gives hand sanitizer to person at a highway rest area near Zhangjiakou on January 15, 2022 ahead of the Beijing 2022 Winter Olympics. – AFP photo

BEIJING (Jan 15): An Omicron case has been detected in Beijing, officials in the Chinese capital said today, as the country battles multiple outbreaks of the highly transmissible coronavirus variant ahead of the Winter Olympics.

The announcement comes a day after the southern city of Zhuhai imposed travel restrictions on residents as a mass testing drive uncovered seven infections.

Millions of people across the country have been ordered to stay home in recent weeks, with scores of domestic flights cancelled and factories shut down, as the country attempts to control a spate of small coronavirus outbreaks, including several from the Omicron variant, ahead of next month’s Beijing Olympics.

Authorities are testing the other occupants of the patient’s residential compound and office building, and have restricted access to 17 locations linked to infected person, Pang said.

Beijing has long barred people from parts of the country that have reported cases, while requiring all arrivals to provide recent Covid-19 tests.

Residents have also been urged in recent weeks not to leave the city for the upcoming Spring Festival holiday.

On Friday, the coastal city of Zhuhai, which borders the gambling hub Macau, said Omicron had been detected in one mildly ill and six asymptomatic patients.

Zhuhai officials have asked residents to avoid leaving the city “unless necessary”, with those who are required to show negative Covid test results within the past 24 hours.

The city had launched mass testing for its population of 2.4 million people on Friday after a Covid case was detected in neighbouring Zhongshan earlier in the week.

Businesses including beauty salons, card rooms, gyms and cinemas were ordered to close on Thursday, with officials announcing the suspension of public bus routes in parts of the city.

China has kept Covid-19 cases relatively low throughout the pandemic with its zero-tolerance strategy of immediately ordering mass testing and strict lockdowns when infections are detected.

Harsher lockdowns have been imposed on China’s smaller cities where millions of people have been ordered to stay home and get tested, while economic hubs such as Shanghai and Beijing have locked down and tested only specific neighbourhoods in more targeted efforts.

But the fast-spreading Omicron variant has tested that strategy in recent weeks, appearing in the port city of Tianjin close to Beijing before spreading to the central city of Anyang.

National Health Commission spokesman Mi Feng told reporters that the country faced a “twofold challenge” from both the Delta and Omicron strains of the virus.

He warned that regions that had not yet seen outbreaks “must not relax” their prevention measures and “strengthen risk auditing”.