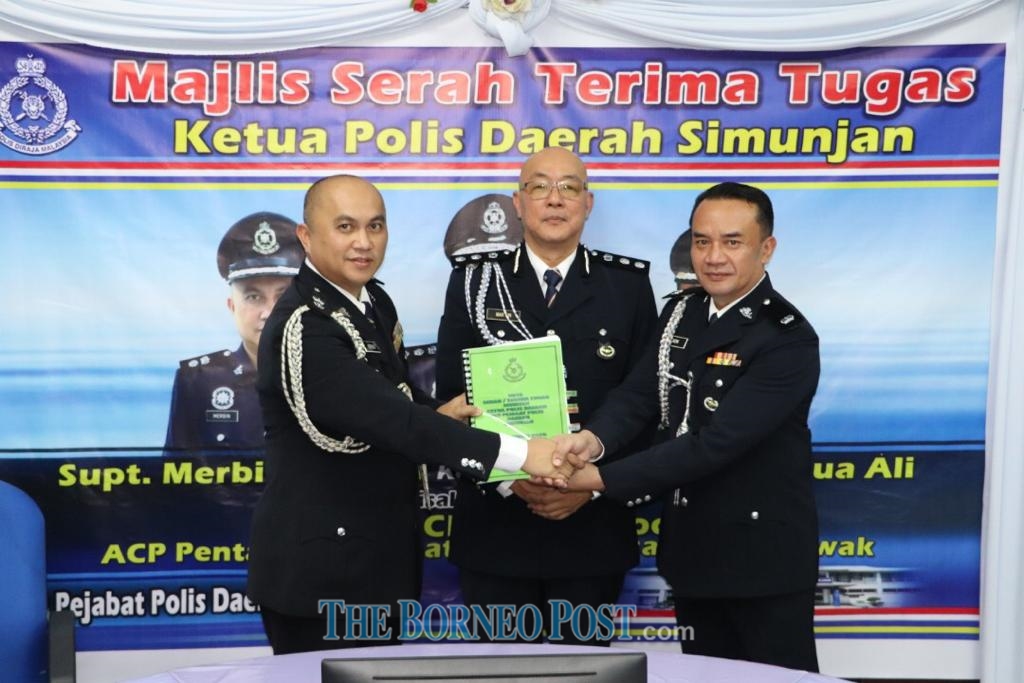 Merbin (left) handing over his duties to Nixon at Simunjan District Police Headquarters today. Witnessing the ceremony was Koo (center).

KUCHING: Simunjan district police chief Supt Merbin Lisa, who was promoted to the rank of superintendent yesterday (Feb 12), will be reporting for duty as the new Kuching district deputy chief (operations) tomorrow (Feb 14).

Today, a handing over of duties was held at the Simunjan District Police Headquarters and saw Merbin handing over his post to DSP Nixon Joshua Ali with immediate effect, which was witnessed by ACP Martin Koo who represented the Sarawak Police Contingent.

Nixon was the staff officer at the Criminal Investigations Department (Forensics) under the Sarawak Police Contingent.

In his outgoing speech, Merbin urged all the district police department heads to continue their community based programmes such as a dialogue session or meet the client’s day.

“It is important to meet the community face-to-face as it provides us (police) a chance to obtain vital information and tip-offs for crimes,” said Merbin ,who had served as the district’s police chief for the past four months.

He added that with new leads or information, the police are able to take immediate action by conducting raids and arrests.

“I am also grateful for the cooperation that everyone here in Simunjan have given to me,” he added.

Also present at the ceremony were the personnel of different ranks from the Simunjan District Police Headquarters.