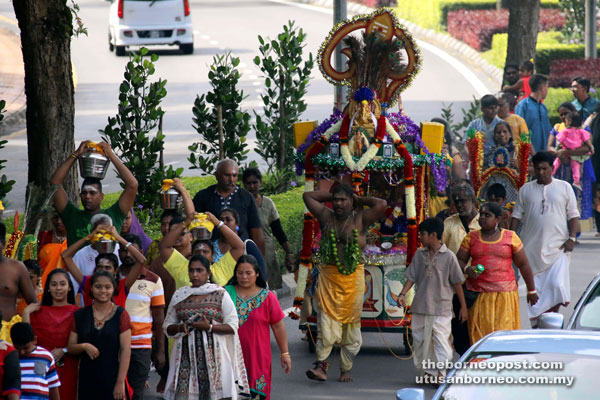 File photo of devotees at a Thaipusam street procession in Kuching.

KUALA LUMPUR (Jan 12): Only the paal koodam procession of carrying milk pots, prayer activities and chariot processions will be allowed during the Thaipusam festival this time, with the kavadi ceremony still not allowed in the effort to curb the spread of the Covid-19 pandemic.

National Unity Minister Datuk Halimah Mohamed Sadique said paal koodam was allowed from this Friday (January 14) to January 19 with the number of devotees allowed to be set according to the respective temples.

Each session is for 30 minutes, and it will be followed by sanitisation work. For the Sri Subramaniar Swamy Temple in Batu Caves, Selangor, the number of individuals for paal koodam will not exceed 100.

Halimah said for temples other than the five mentioned, the number of people involved for the paal koodam would not exceed 30.

She said devotees participating in the “paal koodam” procession were required to register with the temple management and put on the provided tags.

According to her, 12 prayer sessions have been set from Jan 16-17 and Jan 19 from 5am to 5pm, while 18 sessions were set for Jan 18 from 5 am to 11pm, with the number of people allowed set according to the respective temples.

At the Sri Subramaniar Swamy Temple in Batu Caves, there will be no more than 6,000 people on each day. Each 30-minute prayer session is followed by a sanitisation process, with the total number of people for each session in the temple not exceeding 500.

“Besides that, only members of the temple management are allowed to accompany the chariot, and they must register with the temple management to get the permission tags, and also need approval from the police,” she said, adding that the complete SOP for Thaipusam would be uploaded on the National Security Councils website.

Meanwhile, Halimah said any temple detected with Covid-19 cases would be instructed to cancel any Thaipusam ceremonies there.

She said although the festival would be celebrated by Hindus on Jan 18, there were devotees who fulfilled their vows before the date.

If there is a case involving the Thaipusam ceremony on any of the earlier dates of Jan 14 to 17 and 18, we will ask (the temple) to stop (the ceremonies) and cancel them. Only that particular temple (affected by Covid-19 cases) will be closed, she said.

She also reminded temple managements to only allow permanent stalls under their purview to operate during the festival, while the handing out of free food and drink (thanir phandal and anamthanam) were not allowed.

According to her, temporary stalls for promotions or sales inside or outside the temple area are also not allowed.

Thaipusam is a festival celebrated by Hindus around the world in the month of “Thai” which is the 10th month in the Tamil calendar, to commemorate the event of Lord Murugan receiving the “Vel” or holy spear from his mother, Goddess Parvati, to vanquish the evil Soorapadman and restore the prosperity and well-being of humans.

Meanwhile, Halimah informed that the Covid-19 Ministerial Quartet Meeting yesterday had approved the SOP for the Chinese New Year celebration, and it would be announced soon. – Bernama