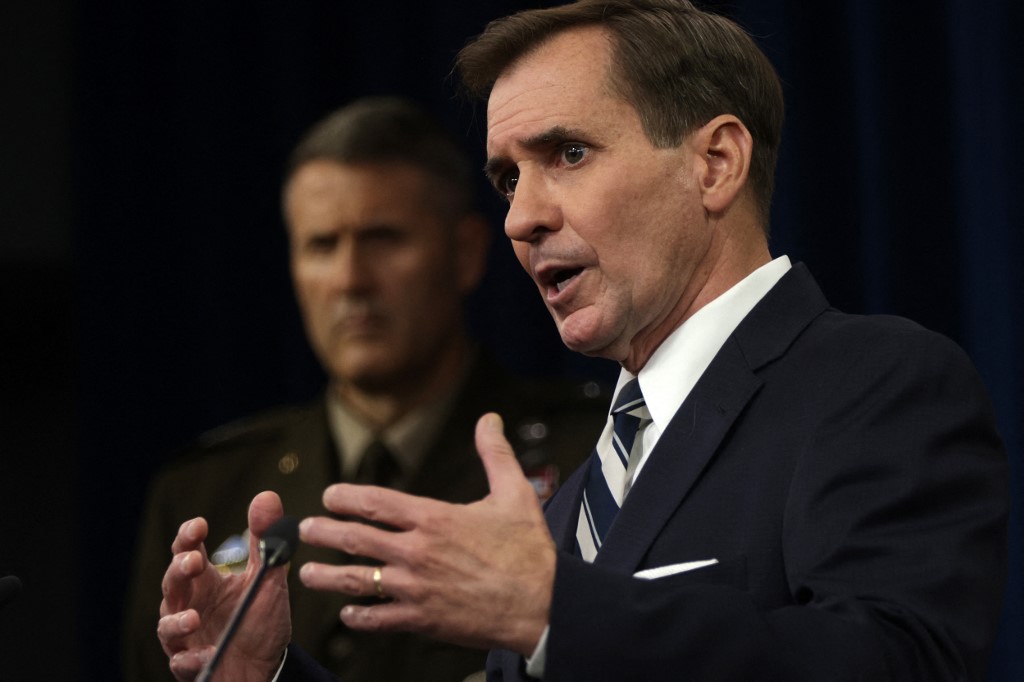 US Department of Defense Press Secretary John Kirby in a news briefing at the Pentagon on August 23, 2021 in Arlington, Virginia. – AFP photo

KABUL (Aug 26): A large explosion rocked Kabul airport today, the Pentagon said, causing a number of casualties after Western nations warned of an imminent terror threat and as thousands of people gathered hoping for a flight out of Taliban-controlled Afghanistan.

“We can confirm that the explosion near the Abbey Gate of the Kabul airport has resulted in an unknown number of casualties,” Pentagon spokesman John Kirby said in a tweet.

US President Joe Biden had earlier cited an “acute” terrorist threat from the regional chapter of the Islamic State jihadist group.

An AFP journalist in Kabul saw a plume of smoke rising into the sky from a site near the airport.

“When people heard the explosion there was total panic. The Taliban then started firing in the air to disperse the crowd at the gate,” a witness told AFP on condition of anonymity.

“I saw a man rushing with an injured baby in his hands.”

The US government and its allies had raised the alarm earlier in the day with a series of advisories warning their citizens to avoid the airport.

No specifics were given in the terror advisories, but Belgium’s Prime Minister Alexander De Croo referred to a threat from suicide bombers.

London also issued a warning to its citizens, saying “if you can leave Afghanistan safely by other means, you should do so immediately”.

Images posted on social media, which could not be immediately verified, showed men ferrying injured people to safety in wheelbarrows.

In another picture a boy was seen clutching the arm of a man whose clothes were soaked in blood.

More than 95,000 Afghans and foreigners have fled Afghanistan via the US-led airlift since the hardline Taliban movement took control of the country on August 15.

Despite the US and other warnings of a looming terror threat, huge crowds of people desperate to flee the Taliban continued to throng the airport, their bid for a way out becoming increasingly anxious ahead of the August 31 deadline set by Biden to end evacuations and withdraw troops.

Biden and his aides have not budged on the hard deadline — even as some foreign nations warned they would be forced to leave at-risk Afghans behind.

The Pentagon had earlier Thursday reiterated that operations would continue until the cut-off.

But several Western allies have already wrapped up their airlift operations including Canada, whose government said it was “truly heartbreaking” to leave behind those who wanted to be rescued.

In recent years, the Islamic State’s Afghanistan-Pakistan chapter has been responsible for some of the deadliest attacks in those countries.

It has massacred civilians at mosques, shrines, public squares and even hospitals.

The group has especially targeted Muslims from sects it considers heretical, including Shiites.

But while IS and the Taliban are both hardline Sunni Islamist militants, they are rivals and oppose each other.

The Taliban have promised a softer brand of rule from their first stint in power, which ended in 2001 when the United States invaded because they gave sanctuary to Al-Qaeda.

But many Afghans fear a repeat of the Taliban’s brutal interpretation of sharia law, as well as violent retribution for working with foreign militaries, Western missions or the previous US-backed government.

There are particular concerns for women, who were largely banned from education and employment and could only leave the house with a male chaperone during the group’s 1996-2001 rule.

Some of the Afghans massed outside the airport have foreign passports, visas or eligibility to travel, but most do not.

Several people have died in the chaos around the airport in recent days.

Despite the harrowing scenes, the Taliban have ruled out any extension to next Tuesday’s deadline to pull out foreign troops, describing it as “a red line”. – AFP