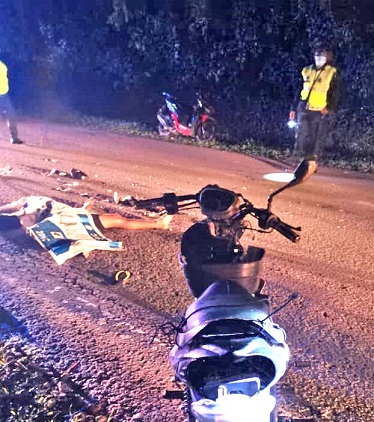 The motorcyclist pronounced dead at the scene when he knocked a water buffalo at Jalan Kionsom in Inanam.

KOTA KINABALU: A motorcyclist was killed when he accidentally knocked a water buffalo at Jalan Kionsom in Inanam, here on Tuesday.

Muhizan Shazry Simon, 25, from Kampung Poring in Ranau, was pronounced dead at the scene of 7.35pm accident by paramedics.

Kota Kinabalu police chief ACP Mohd Zaidi Abdullah said police investigation revealed that the incident happened when the victim was heading from Inanam to a friend’s house in Kg Kionsom.

According to an eye-witness, the victim was lying unconscious by the side of the road. There was also an injured water buffalo near the scene.

The victim might have knocked the animal as it was crossing the road, said Mohd Zaidi.

The victims body was taken to the Queen Elizabeth Hospital for a post-mortem and the case is being investigated under Section 41(1) of the Road Transport Act 1987.