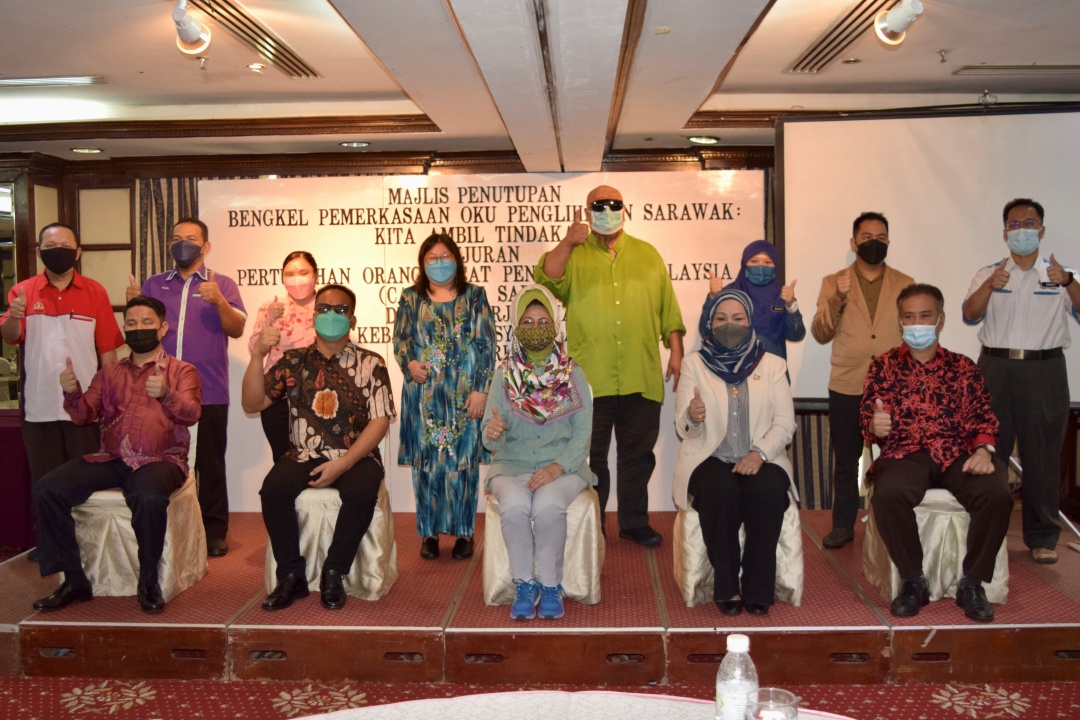 Fatimah, flanked by Noriah (seated, second right) and Isak, joins Ahmad Shamsuri (seated left), Mohd Nazari (seated left) and members of the organising committee in a photo-call with some of the workshop participants. Photo by Roystein Emmor

KUCHING (Jan 24): More medical specialists are needed to facilitate effective diagnosis and screening of individuals with special needs (OKUs) at an early age.

In pointing this out, Minister of Women, Childhood and Community Wellbeing Development Dato Sri Fatimah Abdullah also called for improvement of the facilities to carry out the diagnosis particularly in the rural areas, as well as for intervention and rehabilitation to commence immediately after birth of children with disabilities.

We always urge parents to send their OKU children to receive education as early as possible so that they can at least read, write and calculate, she said in her speech at the closing ceremony of a three-day workshop jointly conducted by the Sarawak branch of Society of the Blind in Malaysia and Sarawak Welfare Department, at a hotel here yesterday.

Adding on, Fatimah said the OKU community must be given learning opportunities and also the right to live as independently as able-bodied individuals, including in terms of seeking education and employment.

I always believe that we do not want sympathy; what we want is empathy and for this (OKU) community to be given the opportunity.

The minister also stressed that all government agencies must coordinate with one another instead of working in silos, towards realising the state governments aspiration of empowering the OKU community and safeguarding their welfare.

On a related matter, Fatimah acknowledged that Sarawak Welfare Department had set aside a fund of RM20,000 for each of six non-governmental organisations (NGOs) this year, so as to enable them organise and run workshops meant to empower the OKUs.

Aside from community empowerment, talent development must also be focused for the OKU community as many of them have obtained remarkable achievements in regional and international competitions, she added.

On the nationwide Covid-19 immunisation programme, Fatimah said the OKU community in Sarawak recorded one of the highest vaccination rates in the country.

As such, the state departments are now planning to roll out booster shots for them (OKUs).

The state government also plans to establish a vocational school for OKUs, meant to provide formal training programmes catering to individuals with different types of disabilities.

Those suffering from learning disability constituted the largest proportion of the total number of OKUs in the state, namely at 15,272 people.