RM2.74 million approved for 171 patients under MRF this year 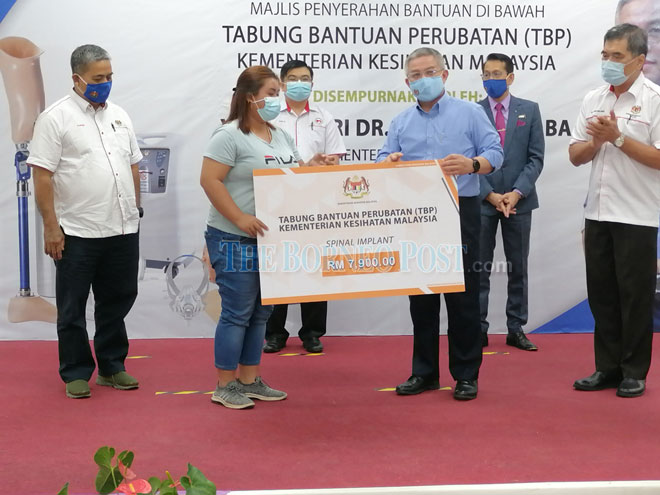 Adham (third from right) presents financial aid to one of the patients as Aaron (left) and Chin (right) look on.

SIBU: Health Minister Dato Sri Dr Adham Baba said the Sarawak government has approved a total of RM2.74 million for 171 patients under the Medical Relief Fund (MRF) for this year.

He said the most number of patients who received the fund were from the orthopedic discipline with 71 patients.

Hopefully, the medical assistance provided by the government will help alleviate the burden borne by the people and at the same time improve the quality of their daily life, he added.

Adham was speaking at the presentation of the funds held at Sibu Hospital yesterday morning.

A total of 10 patients from Sarikei, Sibu and Kanowit received their financial aid yesterday morning.

The purpose of MRF, Adham said, was to assist poor people to improve their health so that they can continue to live a normal life, hence contributing to the development of the economy.

He said the MRF started in 2005 with an initial allocation of RM25 million before it was increased to RM40 million annually since 2014.

This include 618 cardiological-related patients, 451 orthopedic patients and 242 otorhinolaryngology (ENT) patients.

The amount for these three categories alone was RM18.8 million which is 80 percent of the total value of assistance approved.

To date, a total of 63,000 patients from throughout the country have benefits from this fund, he added.

Adham said assistance through MRF was implemented according to the procedures which would be determined so that it could provide equal benefits to all the patients.

He said patients who would want to apply for the MRF should be refereed by the medical officers at the government hospital or the University Medical centre.

Considerations and approval of the funds will be made based on the MRF guidelines and funds.

On Covid-9, Adham said MoH was always committed in ensuring the health of the people were taken care of in order to improve their quality of life.

He admitted there was still a large section of the people who were still affected by the impact brought by the Covid-19 pandemic.

MoH will continue to implement various assistance and initiatives to help the people through MySalam programme and haemodialysis subsidiary assistance, he said.

Adham also paid tribute to the medical staff and frontliners of Sibu Hospital in their fight against the deadly Covid-19.

MoH wants to record its highest appreciation for the sacrifice of the frontliners who are willing to leave their family at home and to fulfill their trusts given to them and serve the people.

We all know Coivid-19 is an invisible enemy and we all know how difficult it is to curb the spread and the hardship brought by the MCO, the minister added.