Manyin: More research should be conducted on local durian varieties in Sarawak 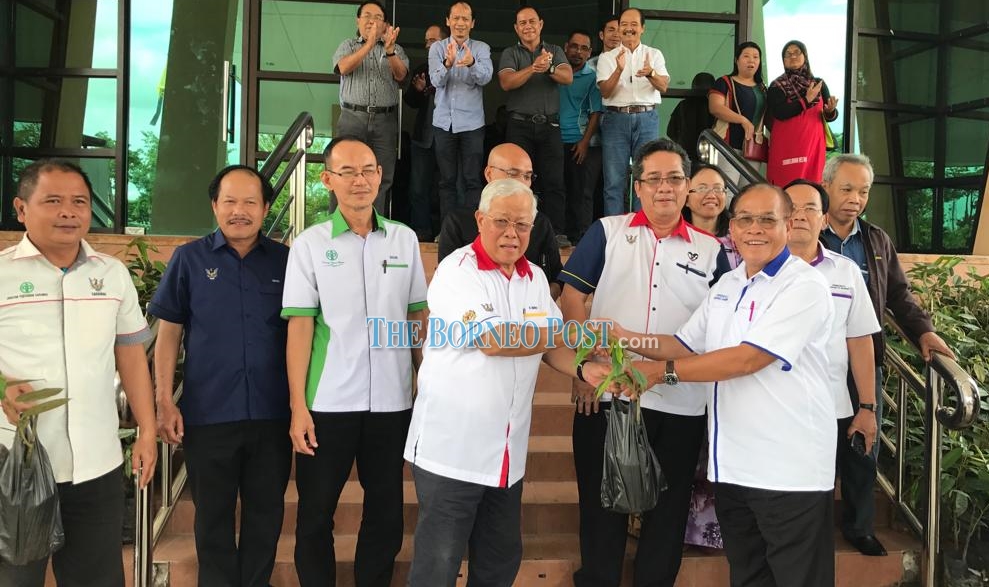 Manyin (fourth left) hands over a Musang King seedling to Penghulu Dennis Gamin in a symbolic presentation at the end of the programme. Also in the photo is Dr Sinang (second left).

TEBEDU: Dato Sri Michael Manyin Jawong has called for more research to be conducted on local durian varieties in Sarawak as some are believed to be better than the popular Musang King.

The Education, Science and Technological Research Minister said the findings and input from such research will increase the commercial value of local durians and in turn improve the income of durian planters especially those in the rural areas.

I have suggested to the Agriculture Department to do such research, because we believe the local durian varieties have qualities not found in Musang King durian. In Serian and Tebedu for example, we can find local durians which have better taste and texture while the durian trees have been there for so many years which showed resistance to disease.

I believe Serian Division has the potential to be the producer of renowned local durian varieties, he said when closing the Agriculture Facilitation Fund (AFF) for Tebedu constituency at Dewan Masyarakat Tebedu yesterday.

Although the government is now encouraging durian planters to plant Musang King due to its good prices, Manyin said a lot of effort and risk are involved to ensure the seedlings can grow healthily and free from diseases.

He also said constant supply of quality durian is needed now that there is a Collection, Processing and Packaging Centre (CPPC) for durian already being built in Tarat.

On another matter, Manyin who is Tebedu assemblyman advised farmers in the constituency to diversify rather than being dependent on one cash crop.

He said they should consider adopting new and modern farming technique and plant more corn and leafy vegetables which are now in demand as consumers are now getting more health-conscious in their diet.

Having said that, he hoped pepper smallholders affected by the price drop of this commodity would continue maintaining their pepper farms as he believed the commodity will rise again soon.