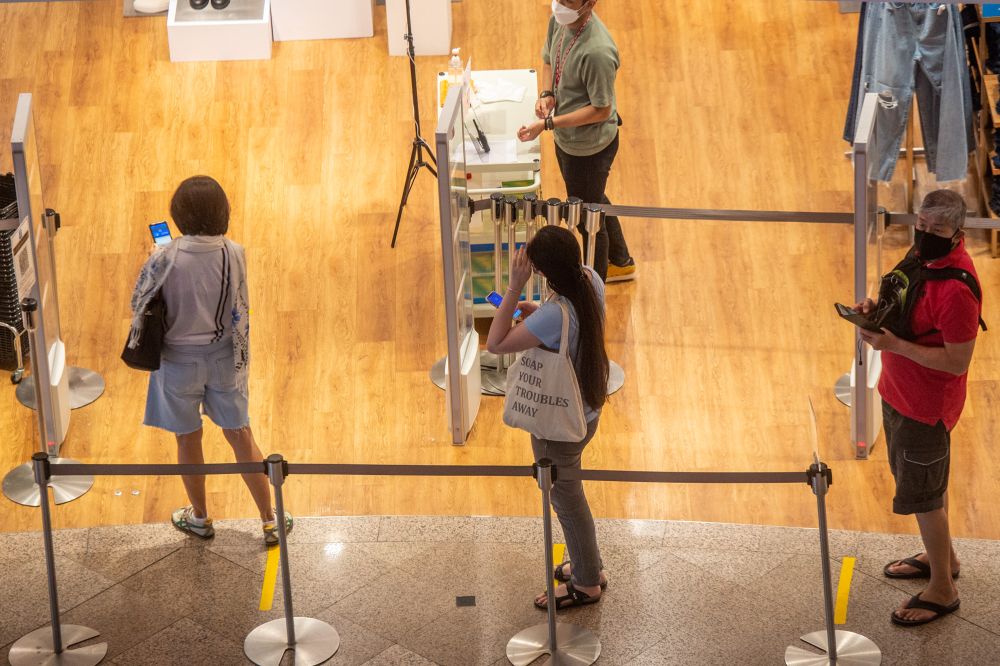 Patrons line up as they wait to enter one of the stores at a shopping mall in Kuala Lumpur September 10, 2021. – Malay Mail photo

KUALA LUMPUR (Nov 25): The Malaysia Shopping Mall Association has lamented that its best efforts to safeguard mall patrons by doing away with the use of record books as an option have resulted in some being unwittingly penalised by authorities.

The association said that some malls do not use the books as it provided a loophole for unverified shoppers to gain entry into the premises without any way for the mall personnel to verify their self-declared health status.

We are thoroughly distraught and dismayed to be informed that we still have malls being fined RM10,000 for not providing the record book (the loophole) in the Klang Valley where internet coverage is obviously well provided.

Why are we being unwittingly penalised and stymied even though we are merely trying to uphold safety for our community? the shopping mall operators asked in a statement today.

They defended their decision to do away with the logbooks, saying it was to theirdisadvantage because malls lose shoppers but gain more complaints and brickbats from patrons.

They also maintained thatrelying on the MySejahterasmartphone app was a saferway to record visitors than the physical logbooks.

The use of this record book is only allowed in locations where there is no internet coverage or other reasonable excuses senior citizens, no smartphones etc.

“As most, if not all, shopping malls are located where there is internet coverage, we insist that after the mandatory temperature check of below 37.5 degrees C, all shoppers health status are low risk or casual contact, low risk (no symptoms) as determined by MySejahtera before they are allowed entry by scanning the malls location QR code.

This is the only and sure way of safeguarding that only safe shoppers are allowed entry, they said.

Themall operatorsadded that they thought such admission controls meant every malls environment is effectively on its own, a green bubble world.

The association also lamented that there were still businesses forced to remain closed even though most states were in Phase Four of the National Recovery Plan.

Shopping malls are now already in the final stage of the NRP where most businesses can operate with various levels of capacity restrictions and SOPs. However, it is disheartening that there is still a negative list to date and we wonder what and when will be a definitive route to get out of this Negative List with Phase Four being the final Phase, it said.

The association reiterated that mall operators will continue to be highly conscious of complying with the necessary SOPs. – Malay Mail