SIBU (Jan 15): Malaysian rugby players need to have the correct attitude to build a strong and competitive team that will excel in international tournaments.

According to Malaysian Rugby Union (MRU) 15s head coach Rodney So’oialo, a player’s size does not really matter but rather it is the right attitude and correct approach that commands great importance in the sport.

“Size is not the major factor that determines the strength of the team though it does help, the number one factor is that the player must have the right attitude and the passion to work hard and stay committed to the sport,” he said at a press conference Friday afternoon.

He cited Japan as an example, saying that most of the Japanese team players are on the smaller size yet Japan is currently ranked as one of the top teams in Asian countries.

“It is important that players have the right attitude to work hard. If they are lazy, they just won’t go anywhere.”

The 41-year-old former All Blacks captain was in Sibu conducting a search for potential players in the national team to take part in the upcoming Asian Rugby Championship (ARC), to be held in either Kuala Lumpur or Hong Kong in May, as well as developing the national rugby team. 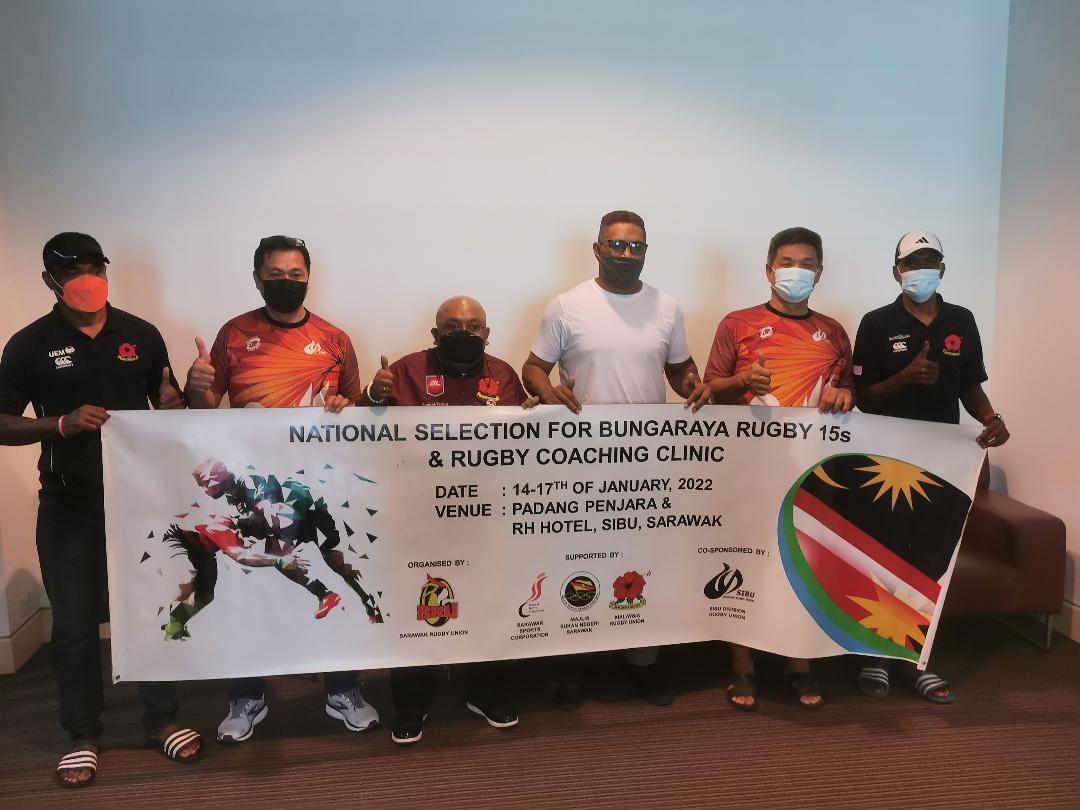 (from left) Ben, Zakaria, Louis, So’oialo, Ting and Yusri unveil the banner for the talent search for the national team.

Malaysia, which is ranked 49th in the world, will take on defending champion Hong Kong, ranked 22nd, and South Korea, ranked 31st, during the ARC tournament and the winner will meet the winner of the Oceania playoff to decide for the World Cup 2023.

So far, So’oialo has visited Johor, Terengganu, Selangor as well as Perak and several outstanding players have already been shortlisted.

For Sarawak, some 30 of its best players will converge here in the next two days to join in the talent search, which also includes fitness tests and a 10-a-side game, at the Sibu Prison Field today and tomorrow.

The final list for the shortlisted Sarawak players will only be released late afternoon tomorrow after an evaluation by Rodney and Yusri.

Meanwhile, So’oialo acknowledged that Malaysia has few rugby competitions and hopes to see more competitions being held so that players can get the much-needed experience and exposure.

Touching on the standards of the Malaysian rugby team, he said that more could be done to whip the team into one with world calibre.

He noted the most noticeable difference between Malaysia and New Zealand was that rugby players from the latter would start their career at a young age.

“The moment they start walking and know how to handle a rugby ball, they will train full-time. That is a big deal, and a large difference, compared to players in Malaysia.

“We don’t categorise (players) into one sport so (whether in) in cricket, football, volleyball or basketball, the players develop the skills along the way and they will embrace their choice when they grow up,” he said, adding thateventually, their choices would become their full-time sport and in New Zealand, rugby is one of the most popular and beloved sports among the people.

So’oialo is an accomplished rugby player and was most recently a coach and director of rugby at Trinity College Kandy in Sri Lanka as well as a coach at Verona in Italy and the Tawa Rugby Club in New Zealand.

He played for the New Zealand Hurricanes in the Super Rugby Competition and racked up 62 test appearances for the All Blacks between 2002 and 2009, mostly as an eight man.

He also won the Commonwealth and World Cup Sevens for New Zealand.

He was appointed Malaysia 15s rugby head coach on Sept 23, replacing fellow countryman Brad Mika who was in charge since 2018.