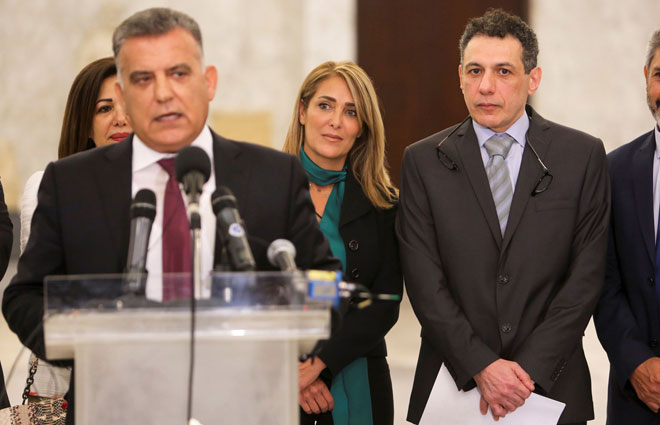 Zakka, who had been detained in Iran since 2015, stands next to Major General Abbas Ibrahim as he talks during a news conference at the Presidential Palace in Baabda, Lebanon. Reuters photo

BEIRUT: A Lebanese businessman detained in Tehran for more than four years on charges of collaborating against Iran arrived in Beirut on Tuesday after his government secured his release.

Nizar Zakka, 52, an information technology specialist with US permanent residency, was sentenced to 10 years in jail and fined 4.2 million in 2016. He denied the charges, while Iranian media have described him as a US spy.

Lebanese President Michel Aoun had lobbied for Iran to grant him amnesty, and officials in Tehran said his release was partly due to the countrys close ties with Lebanons Iran-backed Hezbollah movement.

Visibly shaken, he thanked Lebanese officials and his family profusely.

He said he did not want to go into details about false accusations and mock trials.

Ibrahim said that while Hezbollah had played a role in the release the base was the request from (President) Aoun. Zakka, who lives in Washington D.C., disappeared in Iran in 2015 after attending a conference there.

He was a founding member of IJMA3, an IT association active in development projects in the Middle East and North Africa funded by the private sector and governments, including the United States.

It is without a doubt a great day for Mr Zakka and all those who have supported him during his unlawful imprisonment, a State Department spokeswoman said.

We hope that Mr Zakkas release is a positive sign for American detainees in Iran. Reuters