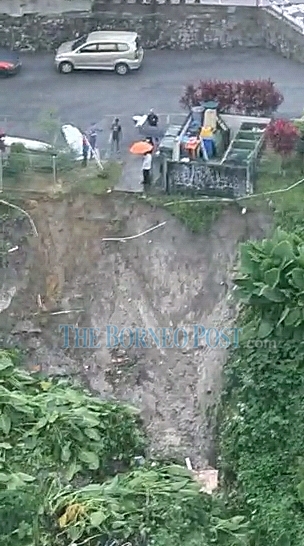 A screengrab from a video that shows the landslide that occurred near SMK Kuching High.

KUCHING (Jan 13): The Fire and Rescue Department (Bomba) has responded to a landslide that was reported near SMK Kuching High at around 4pm today.

At the scene were firefighters from the Padungan fire station who covered the affected area with a tarpaulin to ensure no further erosion will occur.

It was also revealed that the landslide occurred some 80 metres from the school’s main building.

Currently, no further soil movement was detected in the area as of 6pm today.

The school’s management has also been notified to contact the department if there are any recurring landslides in the area.

It is believed that the landslide was caused by the continuous downpour that hit the city last night, causing flash floods in several areas.