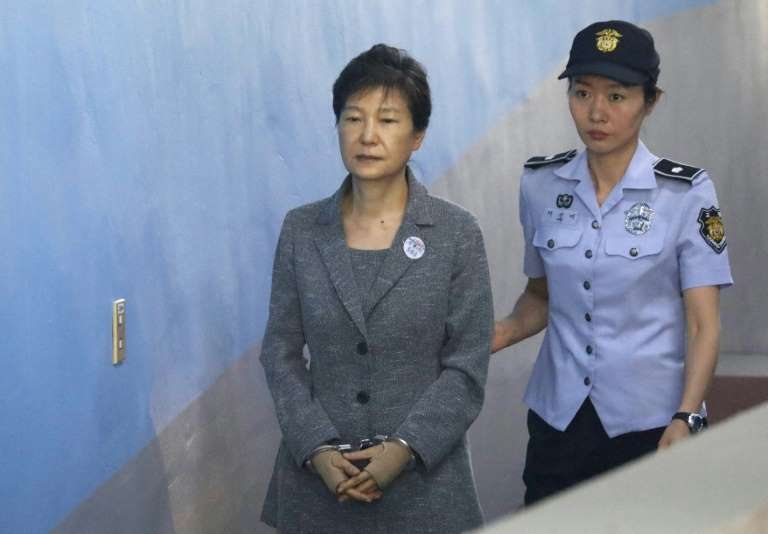 Park Geun-hye was convicted in 2018 of bribery and abuse of power. AFP Photo

South Korea’s top court upheld a 20-year prison sentence for disgraced former presidentParkGeun-hyeon Thursday, in the final rulingover the corruption scandal that brought her down.

The decision brings to an end an extended legal process that involved multiple trials and appeals, including a previous Supreme Court hearing.

The country’s first female president was impeached in 2017 after huge street protests against her rule.

She was convicted the following year of bribery and abuse of power and jailed for 30 years. A series of appeals, a retrial and further appeals followed which reduced her sentence to 20 years.

On Thursday, the case went for a second time before the Supreme Court, which said it accepted and confirmed the 20-year sentence.

Parkhas been boycotting the proceedings, saying they are biased against her, and was not present in court on Thursday.

In addition, she has separately been sentenced to two years in prison — to run consecutively — for election law violations.

She now faces a total of 22 years behind bars and would be in her 80s by the time her sentence is up.

Park’s left-leaning successor Moon Jae-in was swept to power by the public backlash against her and her conservative party.

South Korean presidents have frequently ended up in prison after their time in power, usually once their political rivals have moved into the presidential Blue House.

All four of South Korea’s living ex-presidents have been convicted of criminal offences, and former head of state Roh Moo-hyun committed suicide in 2009 after being questioned over graft allegations involving his family.

But Chun Doo-hwan and Roh Tae-woo, former army generals who served jail terms in the 1990s for corruption and treason after leaving office, received presidential pardons after serving about two years.

Thursday’s ruling completes the trial process and makes Park legally eligible for a pardon herself.

Lee Nak-yon, the leader of President Moon’s Democratic Party, said earlier this month he “plans to suggest” pardoning Park and Lee Myung-bak, another former president currently serving a jail term, but faced an immediate backlash from politicians on both sides of the aisle.

The presidential Blue House said Thursday it was “not appropriate” to discuss pardons immediately after the final ruling.

It was a “historical lesson” that a former president had committed acts that meant she had to serve a prison sentence. “This should never happen again.” — AFP