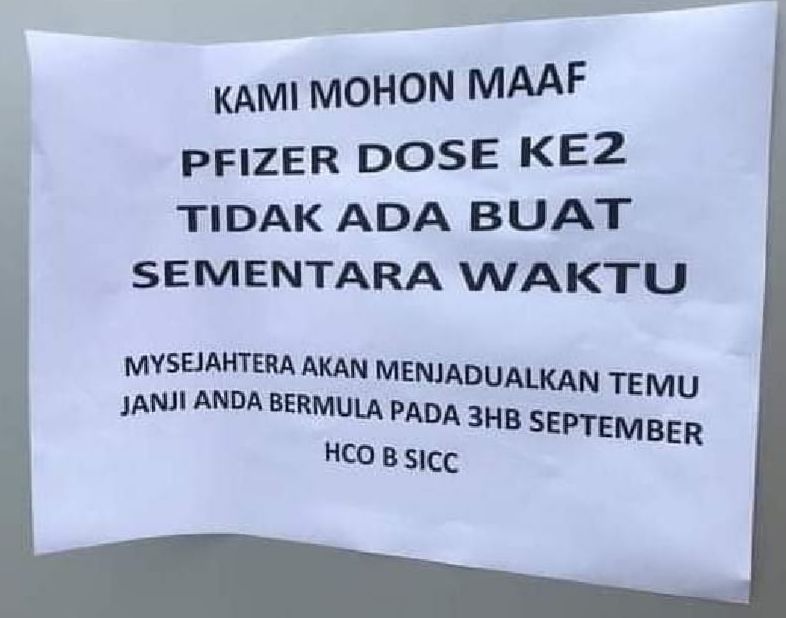 The public notice displayed at the SlCC vaccination centre, informing the public that it has temporarily suspended the second dose of Pfizer vaccination.

He said this is crucial in order to prevent the incident of postponement of second dose of vaccination at the Sabah International Convention Centre (SICC), in the last few days, from happening again.

Goh, who is also a member of Sabah Economic Advisory Council (SEAC) and president of the Federation of Sabah and Labuan Hokkien Associations (FSLHA) hopes Khairy could continue to carry out his task as the Coordinator for National Covid-19 Immunisation Programme, and to give top priority to remedy the pressing issue of vaccine supply shortage facing Sabah, currently.

He said as the Health Minister, Khairy could directly liaise with the key officers of his ministry, and instruct them to quickly ramp up essential medical supplies and manpower for Sabah, in order to accelerate the ongoing national immunization programme in the state, so that it could achieve the goal of herd immunity, as soon as possible.

He urged this in response to the recent news reports that, in the last few days, those who turned up for their second dose Pfizer vaccination appointment, at the vaccination center (PPV) in SICC, had to be turned away, as it has temporarily run out of vaccine supply. The PPV had also put up a public notice and apology for the inconvenience caused. The said notice also stated that members of the public will be informed of the new appointment via MySejahtera, starting from September 3.

He said the incident had caused great inconvenience and worries to those who have registered for vaccination, especially amidst the worsening Covid-19 situation in the state.

If indeed the Pfizer vaccine is facing supply shortage globally, then our government should probably ramp up purchase of vaccines from other manufacturers, from China especially, so as to prevent similar incidents from recurring, he said.

He was especially concerned that Sabah is currently the second worst-hit state in the country, with daily confirmed cases exceeding 3,000.

Goh went on to note that latest official statistics showed that out of 100,000 people in Sabah, 84 were infected, which is higher than the national figure of 77 people per 100,000 population; this clearly showed the gravity of the Covid-19 situation in Sabah.

The Sabah state government and the people are obviously dissatisfied and very concerned with the slow progress of the immunization programme in the state.

We hope both the Federal government and the Ministry of Health could strive to rectify this, immediately, he concluded.

“I believe he will still be the minister in charge of the National Covid-19 Immunisation Programme (NIP/PICK).

Despite him doing a comparatively better job than the other members of the past Muhyiddins cabinet, the distribution of vaccine and CITF vaccine delivery to Sabah remains a problem as it is till now the slowest in the whole of Malaysia,” he said in a statement on Saturday.

“With Khairys appointment as Health Minister, my fond hope is that he will look into the acute vaccine shortage and speeding up of vaccination in Sabah.

“For example, recently I have received numerous complaints from my constituents that despite having an appointment fixed for second dose vaccination (Pfizer) at the Sabah International Convention Centre (SICC) PPV yesterday, when they had turned up as scheduled, they were instead turned away and were told that all appointments for Pfizer’s second dose have been rescheduled to after September 3 onwards,” said the Kota Kinabalu Member of Parliament.

“I have been made to understand that this is due to either a disruption in the timely delivery of vaccines, or plain insufficient supply of vaccine.

“Why is the rescheduling not reflected on the MySejahtera application? Why is it that the SICC PPV had to resort to turning people away instead? Worst still, if it is true that all appointments for second dose have been rescheduled to after September 3, then why are some people still receiving reminders to attend SICC PPV for their second dose? This had led to confusion with some people still deciding to go to SICC PPV even though there may be no vaccine.

“Either way, for a Mega PPV like SICC to actually run out of vaccine and having to turn people away, it shows that something is really, really wrong. This gives the impression that the government is not serious enough in wanting to take control of the Covid-19 pandemic,” Chan said.

“There were on average more than 3,000 daily cases in Sabah for the past few days. Yesterday alone (August 27) 41 people died in Sabah due to Covid-19.

“There will certainly be more deaths if the people are not adequately inoculated. As such, I do sincerely hope Khairy will take heed and ensure timely and sufficient supply of vaccine to Sabah,” he said.

“Besides that, I also hope that Khairy will look into providing or redirecting more Covid-19 treatment resources into Sabah, including medical personnel and medical equipment. The existing medical resources in Sabah really, really cannot cope with the surge in Covid-19 cases seen in Sabah right now. The most obvious sign is the capacity of Covid-19 beds, right now at 99% in Sabah,” said Chan.