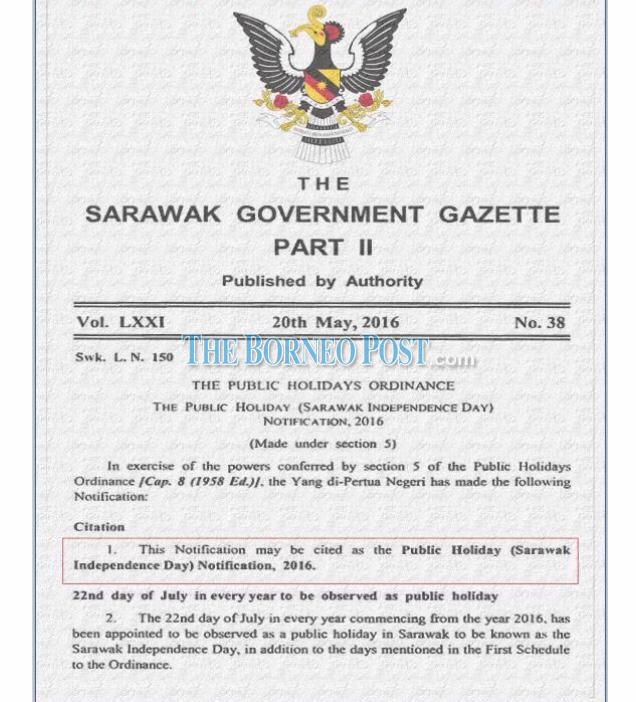 “He cited the history to say that it is Sarawak Self Government Day. But he should be able to explain why in the Sarawak Gazette dated May 20, 2016, that July 22 was gazetted as a Sarawak public holiday called Sarawak Independence Day, effective from 2016,” he told The Borneo Post today.

Chou opined that the seasoned Sarawak MP ought to be able to explain since the Parti Pesaka Bumiputera Bersatu (PBB) lawmaker was a federal minister in 2016.

“So which is which? YB (Wan Junaidi) is in a better position to explain as he was a Sarawak federal minister in 2016,” said the PSB advisor.

On Friday, Wan Junaidi urged PSB to learn history correctly after the party lashed out at him for his remark that Sarawak had gained self-rule and not independence on July 22, 1963.

On Thursday, PSB said it was shocked and disappointed with Wan Junaidi’s remarks in a special report in The Borneo Post on the Sarawak Day (July 22).

PSB added that it held steadfastly to the view that Sarawak was independent when it executed the Malaysia Agreement 1963 (MA63), and the state was an equal partner in the Federation of Malaysia.