PBB Jepak: Time for Talib to give way 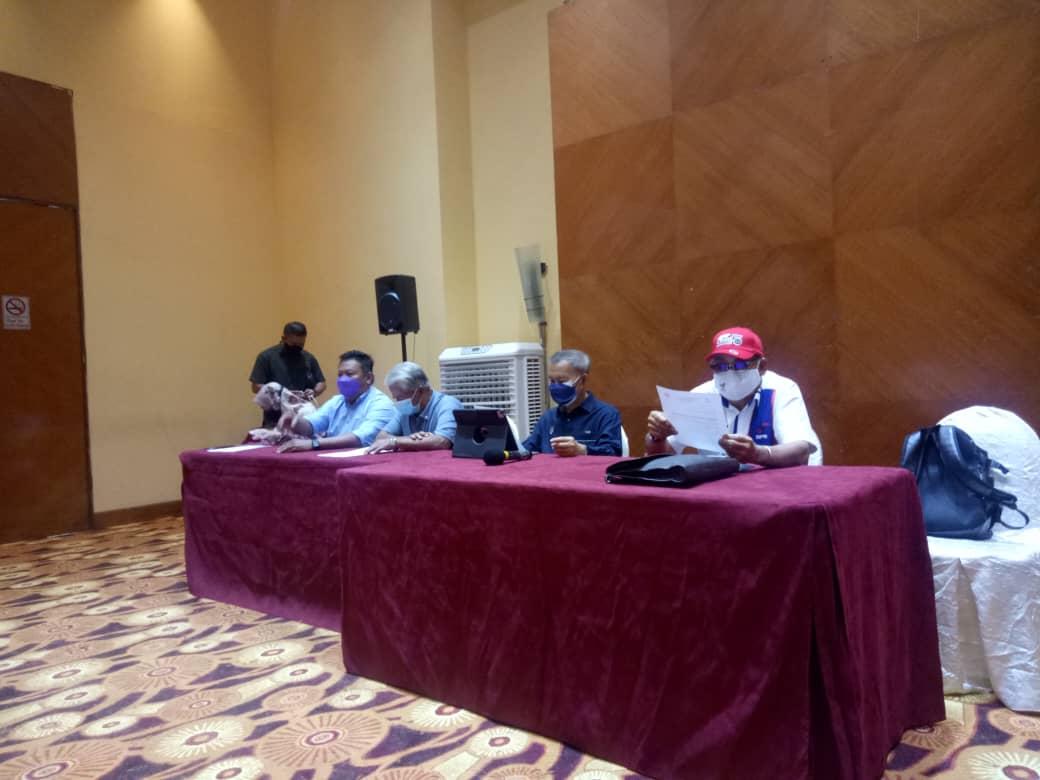 Talib (second right) and Saidi on his left during the meeting which was held harmoniously.

BINTULU (Nov 22): Jepak incumbent Datuk Talib Zulpilip has done his best to serve the people in his constituency for the past 25 years but it is about time he pass the baton to a new, fresh and visionary leader.

This was the view expressed by most members of Parti Pesaka Bumiputera Bersatu (PBB) Jepak branch, sub-branches, women and youth wings during its branch meeting on Saturday, which was also attended by Talib himself.

PBB Jepak branch deputy chairman Saidi Abang Samsudin said they called on Talib to step aside honourably, especially due to his poor health.

He said because of his health problems the PBB Jepak branch chairman, who is the Minister in the Chief Ministers Department (Integrity and Ombudsman), was no longer able to carry out his responsibility to serve Jepak constituents that he had represented since 1996 effectively.

The call for Talib not to contest was also supported by majority of the branch committee members and chiefs of the sub-branches.

“The people in Jepak cannot afford to have an unhealthy elected representative as this will jeopardise all the government plans to develop Jepak constituency,” Saidi pointed out.

He said this was also a request from the grassroots members who are looking forward for a new face as a candidate to contest in Jepak under Gabungan Parti Sarawak (GPS) ticket.

“Who is the new candidate for Jepak, we leave it to our Chief Minister to decide,” Saidi added.

However, he said this new candidate must be from PBB Jepak who has high commitment as an elected representative.

“The PBB Jepak machinery will work hard to ensure the victory of our new candidate and this is important to ensure Jepak remains a stronghold for PBB and GPS,” he told a press conference after the meeting.

They had voiced out to the Chief Minister that if he decided not to re-nominate Talib for the seat, he must pick a candidate from PBB Jepak branch.

We dont want a leader who is not committed, we will find a new candidate to be proposed to the chief minister.

As for me, YB Datuk (Talib) must step down honourably during the climax of excellent development and economy that he might think appropriate. To be honest, I am not supporting the incumbent to be retained, Saidi said, adding this would bode well for the next generation who need a capable elected representative as their voice in the Sarawak State Legislative Assembly.

He said the people were grateful for Talibs contributions in Jepak for the past 25 years in terms of proper basic infrastructure and amenities such as clinics, schools, roads and other government projects.

But what will happen to the people in Jepak if we have an unhealthy leader? We have matured and been long enough in the party, Saidi added.

He pointed out that he made this call based on his capacity as the deputy chairman of the branch who served the members and Jepak people, and voiced their concern on the ground.

I serve the Jepak people and not just in Kampung Jepak but as far as Serupai in Jepak who want PBB to remain in power, he said.

Besides that, he added, there were many issues that needed to be addressed by the elected representative such as job opportunities and direct involvement of the locals in the top leadership of industrial companies including affordable housing.

PBB Jepak Hulu sub-branch chairman Affendi Laili who spoke during the meeting earlier said they were concerned about Talibs health condition and his incapability to take care of his constituents.

We requested the chairman not to contest and to give way to a more energetic candidate, he said.

Aside from many local issues that Talib failed to solve all these years, he believed it was about time for Talib to step back due to his health condition.

It is understood that the calls for Talib to make way for another candidate in the coming state election was also supported by PBB Jepak Women chief Hamdiah Ahmad and Youth chief Jeferi Johari.

A source in PBB told The Borneo Post that Talib, who was present in the meeting which lasted over an hour, responded to the calls.

He was said to be listening to all suggestions but would leave it to the chief minister to decide.

The source said Talib did not say that he will give way to another candidate but stressed that it is a prerogative of the chief minister to pick his best winnable candidate for Jepak.

The source also said the PBB candidacy for all seats under GPS ticket was almost finalised and the GPS chairman will announce it in due course, but no name for Jepak has been disclosed yet.

The Jepak state constituency has been one of the strongholds for GPS in Bintulu apart from Kemena and Samalaju.

Since it was created in 1996, the seat has been won by a representative from the ruling government.

Talib has been holding the seat ever since comfortably. From past records of the state elections, the polling results showed how comfortable Talib was in his seat.

However, following a recent statement from his deputy withdrawing support for him to contest, it somehow turned the Jepak seat hot for some reasons.

Saidi stressed that it is the prerogative of the Chief Minister to choose a candidate who is more visionary and can bring more development in the constituency to defend the Jepak seat, and not necessarily the incumbent if he was not performing.

The Borneo Post approached a local social activist Abdul Kuddus Ramlee who once contested against Talib in the 2011 state election for over the matter.

He believed that if Talib wanted to remain relevant in politics, a drastic and holistic transformation was needed.

“If Datuk Talib is to be re-nominated of course he would need a team of experienced, professional thinkers and executors to give the best advice,” he said.

He said Talib must find a team from various backgrounds who have a ‘glocal’ mind who think globally but act locally.

Whether Talib likes it or not, Kuddus said Jepak constituency needs to change in order to remain relevant.

“I am confident that in a political upheaval surrounding PBB Jepak now, the chief minister will be more comfortable to choose a candidate who is considered not problematic in all aspects,” he said.

He added unlike before, the voters are now more selective in choosing the leaders that they believe can deliver.

“Thus, there is a need to have a strict screening and a political party cannot limit the nomination of candidates just among the party leaders, but must be open so that the search for the best leader yields the expected results,” said Abdul Kuddus.

He listed four characteristics of leaders that were needed by the voters – personality of the candidate, fighting idealism, position in the community, communication with the community and knowledgeable.

“Unlike before when candidates education was not an important issue, now voters in urban areas in particular are placing it as a precondition for selection,” he said.

In the event that the search for a new candidate in Jepak still cannot be finalised, he suggested that the people could consider Abang Johari to contest the seat.

“Abang Jo is a transparent and effective political and development architect, what he says will be implemented,” he said.

He said Bintulu needs transformation in management and political planning urgently to remain relevant as the biggest contributor to the country’s economy.

As the chairman of Bintulu Development Authority, he said Abang Johari has an executive power with help from the board members.

“For the survival of BDA, the chief minister must change the BDA advisory council members who are not functioning to more critical thinkers,” he suggested.