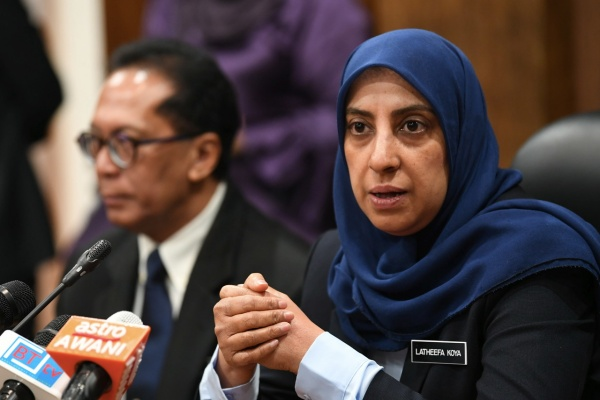 No formal reports or complaints on MyKads being sold to Chinese nationals in Penang have been received so far, says Latheefa. Bernama Photo

KOTA KINABALU: The Malaysian Anti-Corruption Commission (MACC) will conduct investigations into recent claims that the MyKad was being sold to Chinese nationals in Penang if there is clear evidence regarding the case.

MACC chief commissioner Latheefa Beebi Koya said so far, she had not received any formal complaints or reports on the matter.

“We have not received any formal complaints…so we are looking into it, if the syndicate does exist, we will start investigating, because cases involving the sale of identity cards or issuance of false identity cards are not a new thing.

“So far, we have not received the information directly, and only got it through news reports,” she told reporters after paying a courtesy call on Sabah Chief Minister Datuk Seri Mohd Shafie Apdal at his office at the Sabah State Administrative Centre here today. Sabah MACC Director Datuk Sazali Salbi was also present.

Latheefa said however, the MACC did not rely solely on official information, and could act without any complaints being lodged if there were strong grounds to do so.

During a special operation last week, several staff and officials of a government department in Penang, as well as Putrajaya, were arrested under the Security Offences (Special Measures) Act 2012 (SOSMA) for allegedly being involved in the case.

Earlier today, Bernama had reported that an assistant director at the Penang National Registration Department (JPN) would be charged in the Sessions Court tomorrow over suspected involvement in a syndicate to sell MyKad to foreigners in the state. – Bernama

MACC will investigate sale of MyKad to foreigners if there is clear evidence – Latheefa Borneo Post Online.