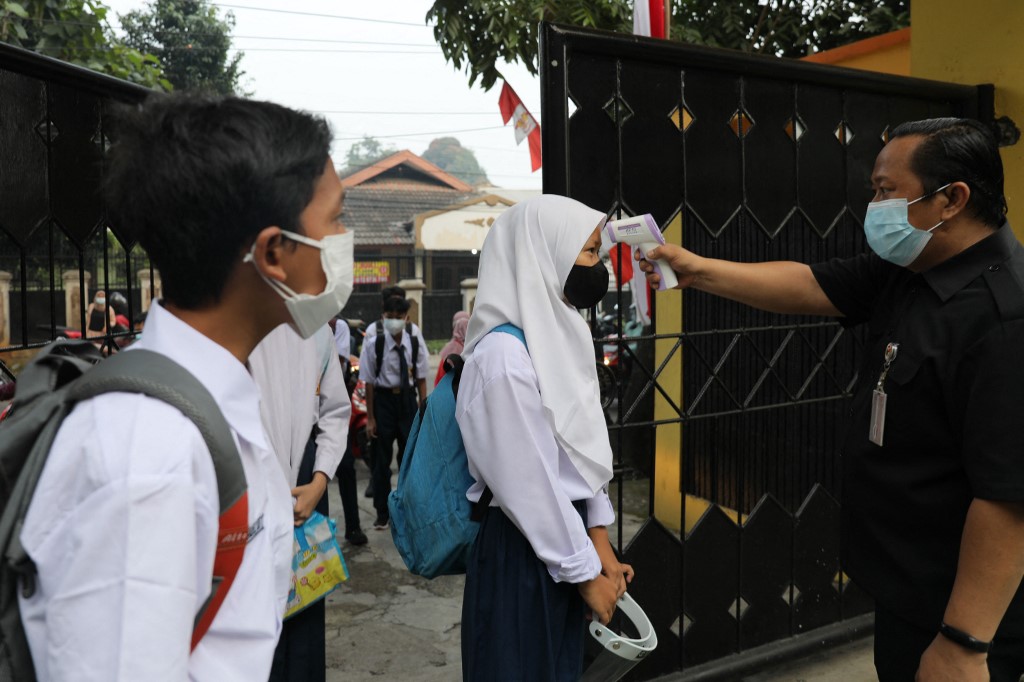 A student has her temperature checked while entering a school in Jakarta on August 30, 2021, as the government reopened schools amid the Covid-19 pandemic. — AFP photo

JAKARTA (Aug 30): Hundreds of schools in Jakarta threw their doors open to students Monday, as some parents resisted the return to in-person learning weeks after Indonesia overtook India and Brazil as the pandemic’s global epicentre.

In Jakarta, the preliminary reopening applies to students from just 610 of more than 10,000 schools, from pre-school through high school.

Elsewhere, in-person learning has resumed in less badly hit areas at the local government’s discretion. But most classrooms across the vast archipelago nation remain shut and a work from home order for non-essential sectors in effect in the worst-hit areas.

Some parents in the capital have opted to keep their children home, even after a year and a half of online classes.

“My daughter has not been vaccinated and the Delta variant is spreading like crazy,” Asmara Wreksono, the mother of a third-grader attending one of the reopened schools told AFP.

“I feel bad because my daughter misses her friends but my priority is to keep my child alive and healthy,” she added.

Indonesia reported its worst coronavirus surge in July when the highly infectious Delta variant ripped through the country, prompting lockdowns.

Cases have since tapered, but in the past week an average of more than 13,000 new cases have been registered daily.

Attempting to reassure nervous families, officials have pointed to strict health protocols, a cap of only 50 percent capacity and high vaccination rates in the education sector.

Over 90 percent of students aged 12 and older and 85 percent of teachers and educators in the capital have been vaccinated, according to Jakarta Governor Anies Baswedan.

“We didn’t decide to reopen the schools suddenly, there was an assessment,” he told TVOne on Sunday.

He said the schools partaking in the reopening were selected because the teachers had all been vaccinated and the campuses had enough seats to facilitate social distancing.

Since the pandemic began, Indonesia has registered more than four million virus cases and 132,000 deaths.

Just over 35 million of the country’s 270 million people are fully inoculated. — AFP