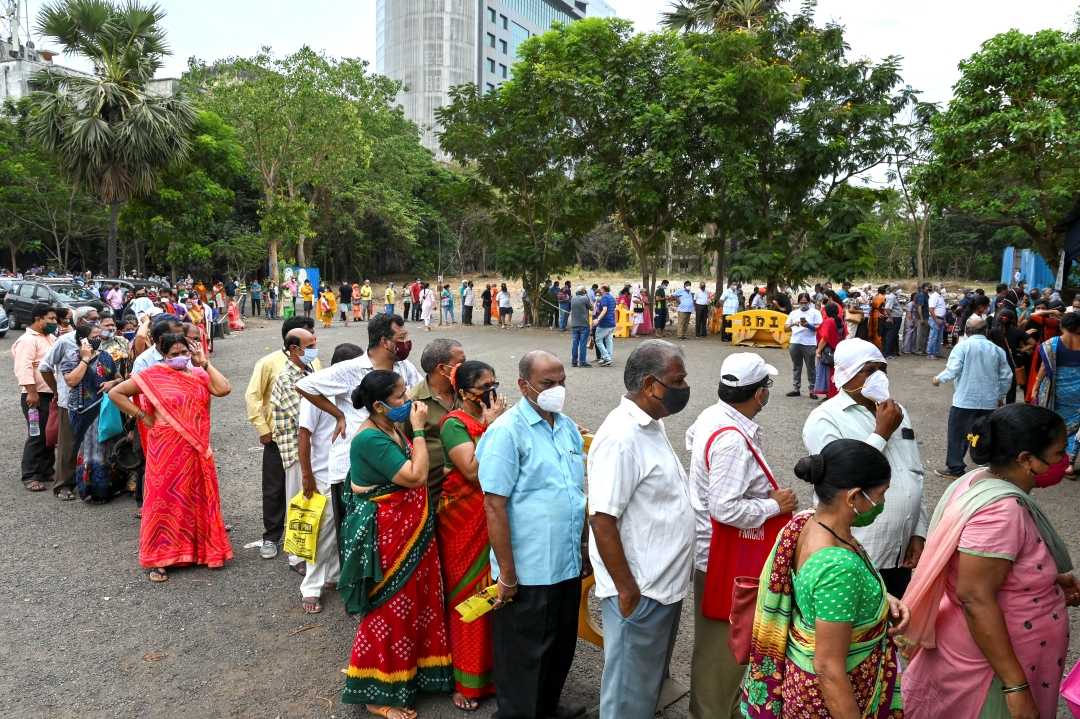 People wait in queues to receive the Covid-19 coronavirus vaccine at a vaccination centre in Mumbai on April 22, 2021. – AFP photo

India posted a global record of almost 315,000 new Covid-19 infections on Thursday as hospitals in New Delhi sent out desperate warnings that patients could die without fresh oxygen supplies.

The country’s long-underfunded healthcare system is being stretched to the limit by a devastating second wave of the pandemic blamed on a “double mutant” variant and “super-spreader” mass gatherings.

Health ministry data on Thursday showed 314,835 new infections in the past 24 hours, the most of any country since the pandemic began, taking total cases to 15.9 million, the world’s second highest.

The numbers are however considerably lower on a per capita basis than in many other countries, raising fears that the situation could get a lot worse.

Major private and government-run hospitals in New Delhi have sent out urgent appeals to the central government, calling for more oxygen supplies for hundreds of patients on ventilator support.

On Wednesday, nearly 500 tonnes of oxygen was supplied to Delhi but this fell short of the required 700 tonnes per day.

Late Wednesday the Delhi High Court ordered the government to ensure safe passage of oxygen supplies from factories to hospitals across India.

“You beg, borrow and steal but have to provide,” the judges said, asking why the government is “not waking up to the gravity of the situation”.

“In the last few days there has been a mad scramble for oxygen. One hospital or the other is running short,” Delhi chief minister Arvind Kejriwal said Thursday.

“Now oxygen supply is coming… we are trying to ensure every truck carrying oxygen reaches the hospitals,” he said, adding that he had requested oxygen be airlifted from the eastern state of Odisha.

“The government has been caught with its pants down,” call centre executive Navneet Singh, 38, told AFP.

Now, states across India have imposed restrictions, with Delhi in a week-long lockdown, all non-essential shops shut in Maharashtra, and Uttar Pradesh set for a weekend shutdown.

Modi on Thursday still urged voters in West Bengal however “to exercise their franchise” as parts of the eastern state voted.

This is despite West Bengal also reeling from the health crisis, with Kolkata “facing an acute shortage of hospital beds”, said Kunar Sarkar, senior vice-chairman of Medica Superspeciality Hospital.

“Beds with oxygen supply are filling fast. Reports are pouring in that at least 100 people are waitingat every hospital in the city,” Sarkar told AFP.

Production of key coronavirus drugs slowed or was even halted in early 2021 at some factories and there were delays inviting bids for oxygen generation plants, according to press reports.

Distraught relatives are now being forced to pay exorbitant rates on the black market for medicines and oxygen, while WhatsApp groups are full of desperate pleas for help.

The United States now advises against travel to India, even for those fully vaccinated, while Britain has put India on its “red list”. Hong Kong and New Zealand have banned flights.

Australia on Thursday also tightened restrictions on arrivals from India, with Prime Minister Scott Morrison saying returnees from there now made up about 40 percent of Covid-19 cases detected in quarantine.

India’s inoculation programme has hit supply hurdles, prompting New Delhi to put the brakes on exports of the AstraZeneca shot, which is manufactured locally by the Serum Institute.

India has administered more than 130 million shots so far and from May 1 all adults will be eligible for a jab.

“I have just one word (for the current situation), which is appalling,” college student Ananya Bhatt, 22, told AFP.

“This is all a result of the gross mismanagement by the government… What kind of a countryleaves its citizens to suffocate and die in this manner?”

“If the rich are suffering and can’t get hospital beds and oxygen, how on Earth will we manage in case we fall sick,” said vegetable vendor Mukhtar Ali, 43.

“People are dying because hospitals can’t give them oxygen. Who is responsible for their deaths? It is the government, it has failed us.” – AFP