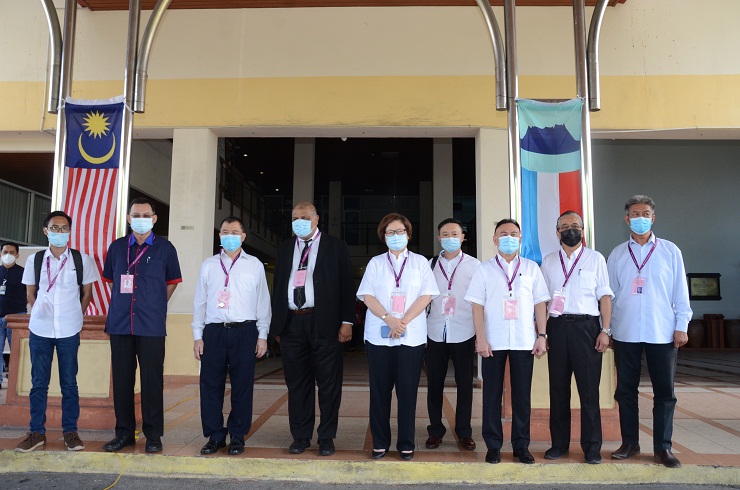 Incumbent Api-Api assemblywoman Datuk Christina Liew, who is also the Parti Keadilan Rakyat (PKR) Sabah chairperson, seeks to defend the seat which she won both in the 13th General Election (GE13) in 2013 and GE14 in 2018.

Apart from Liew, Yee, Pang and Marcel, the contenders for Api-Api state seats are first-time candidates.

Liew, the only woman candidate in the fray, said she was surprised with the number of candidates who would be contesting in Api-Api.

“It shows that the people are very keen to be Yang Berhormat, she said to the media at the nomination centre at Wisma Wanita here yesterday.

Liew added that the election would be extremely challenging as she would be fighting against candidates holding high positions in their respective parties.

“But I will do my best. I will work hard and do my best to convey the message of the party to the voters.”

She also urged the electorate to come out early to cast their votes as this state election would determine their future.

“Every vote counts, especially when there is a nine-cornered fight.

“We have to focus on voting the candidate who will form the next government.”

Liew had successfully defended the Api-Api seat in a five-cornered fight in GE14, as well as won the Tawau parliamentary seat in the last general election.

On the other hand, Chin, 62, is confident in winning the Api-Api seat despite being up against strong contenders comprising an incumbent minister, namely Liew, former ministers and assistant ministers including Yee and Pang.

“Hopefully our people will vote for local parties this time.

LDP is contesting 46 seats in the Sabah polls, majority of which, around 23 seats, are Kadazan Dusun Murut (KDM) seats.

Yee, 65, is a senior politician who first entered politics in 1994 as a PBS candidate for the Likas state seat but was defeated by Sabah Progressive Party (SAPP) president Datuk Seri Panglima Yong Teck Lee.

In 1995, he won the Tanjung Aru parliamentary seat and successfully defended the seat in 1999. In the 2004 general election, Yee was elected as the Kota Kinabalu Member of Parliament (MP) but lost the seat to then then Democratic Action Party (DAP) candidate Datuk Hiew King Cheu in 2008.

As for state seat, Yee has served as the assemblyman for Api-Api state constituency for three terms. He was elected as Api-Api assemblyman in 1999, 2004 and 2008.

He was fielded for the Api-Api state seat again in the GE14 and GE14 but lost the seat to Liew, who contested under PKR.

Yee was formerly the deputy chief minister and minister of resource development and information technology.

Meanwhile, Pang, now a candidate of PCS, was formerly the state assistant minister of tourism, culture and environment and ex-vice president of LDP. He has contested and won the Merotai state seat under the Barisan Nasional (BN) ticket in GE13, but was not fielded by his former party in GE14.

Meanwhile, Marcel, 59, a practising lawyer, described himself as a reluctant candidate as he agreed to holding the state election but opined that the polling date should be deferred until the Covid-19 pandemic has subsided.

“I am the reluctant candidate because I want this election but I do not want it to be held until it is safe to do so.”

In fact, Marcel has a court date on Monday, September 14, for his judicial review against the Election Commission.

Marcel first contested for the Api-Api seat during GE13 in 2013.

He also emphasized the importance of free and fair elections in democracy.

He claimed that past elected representatives for the constituency have failed to perform.

“I have a lot of things to solve, like the Star City project which involves 200 individuals who have suffered for over 15 years.”

He also pledged to resolve the stalled skybridge project at the state capital.

Sim, 55, who is an architect by profession, urged voters to vote based on the candidates qualification rather than the party he or she represents.

He said the voters were sick of leaders who spent too much time politicking than helping the people.

“I am independent. I have no one to answer to. The voters are my boss. I am only answerable to my voters.”

PGRS’ candidate, Chong, 28, a businessman, is the youngest candidate contesting for the seat, whereas Lo, 61, is also a businessman.

On another note, PKR advisory council chairman Datuk Seri Azizah Wan Ismail had turned up at the nomination centre to show her support for Liew.

She said the party has faced multiple-cornered fights before, even up to 16 candidates.

“It does not matter how many join in the fray, it is part of democracy. But we want our candidates to win.”