CM: Important for Swak to implement devt programmes based on states perspective 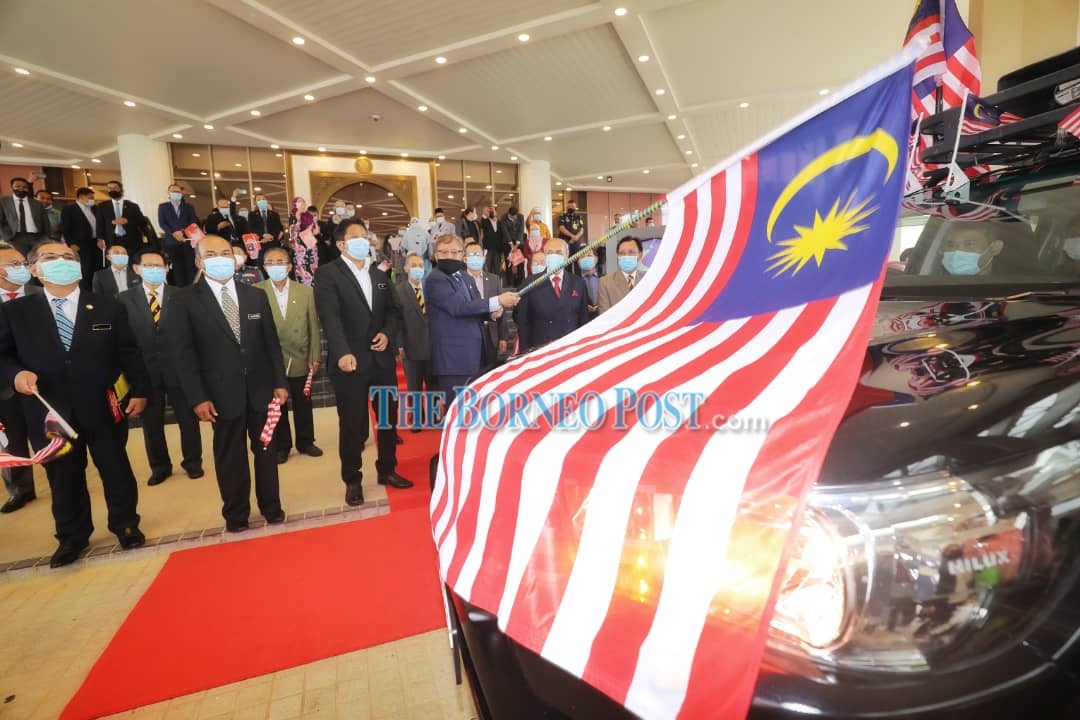 Abang Johari flagging off the Jalur Gemilang convoy outside the DUN. – Photo by Chimon Upon

KUCHING: It is important for Sarawak to implement its development programmes based on the state’s perspective while taking into account the national perspective, said Chief Minister Datuk Patinggi Abang Johari Tun Openg.

“If Sarawakians themselves are not able to preserve the interests and rights of Sarawak itself, who else can do so. It is not wrong for Sarawak to take steps towards greater development so that it can become a developed state by 2030.

“If Sarawak, as a region in this country, can become developed, it will also contribute to the development of Malaysia as a whole. If Sarawak is developed, Malaysia is also developed,” he said at the launch of National Month and Fly the Jalur Gemilang Campaign at the State Legislative Assembly (DUN) building Tuesday.

On the national spirit that such celebration tries to inculcate, he pointed out that Sarawak needs to have a strong and stable government at the federal level.

“That is why, when there was uncertainty in Putrajaya at the end of February, the GPS government chose to provide support to those deemed capable of creating stability and supporting Sarawak’s development agenda, as an unstable central government will bring losses at all levels, both at the federal and state level.

“The Perikatan Nasional (PN) Plus has proven to be able to govern the country effectively, especially when the country faces the Covid-19 pandemic until Malaysia is recognised as one of the best nations in its efforts to address the pandemic. -Covid-19 economic recovery programme is also proven to be planned and implemented in an organised manner,” he said.

According to Abang Johari, the stand of the GPS government is for Sarawak to look at its needs from a micro level, especially in terms of infrastructure development.

“The provision of physical and non-physical connectivity has been intensified over the past two years and extended until 2030,” he added.