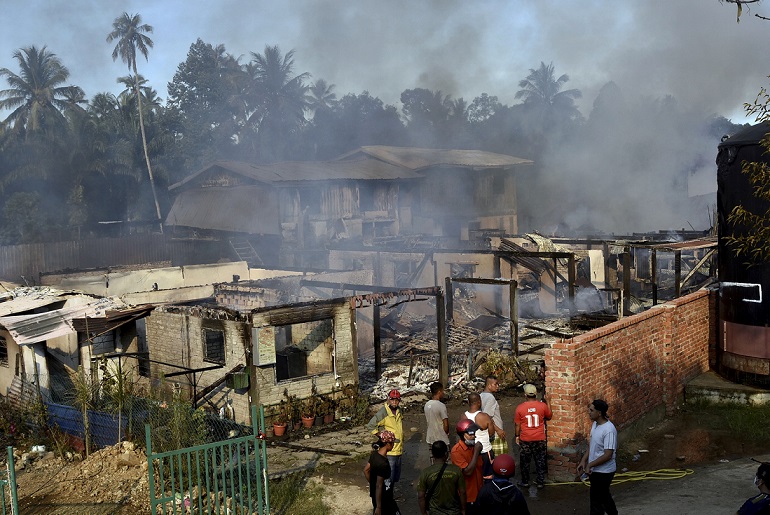 TAWAU (Nov 22): A total of 77 people were left homeless after a fire destroyed 10 houses and six cars in Kampung Kinabutan Besar, Batu 5 here, about 6am on Monday.

A victim, Mansur Taming, 40, said he could not salvage anything including important documents as the incident happened in the blink of an eye.

I had just completed my dawn prayers in the room when I heard my brother-in-law shouting and alerting us of the fire. I ran out and saw the blaze was already in the living room. I quickly took a pail of water from the toilet to douse the flames.

As the fire was spreading rapidly, I quickly ran out to safety,” he told reporters at the scene here on Monday.

For Dermawati Subuh, 33, she was tidying up her room when she was alerted of the fire by the cries of her three children.

“All of a sudden they came to my room screaming that was smoke in the living room. I tried to put out the fire but was told to get the children out of the house immediately. I had no time to salvage anything,” she added.

Meanwhile, another victim, Azman Damit, 32, said he immediately told his parents and brother to get out of the house after he heard a neighbours warning shouts.

“I tried to get hold of some important documents but failed as the house was consumed by flames, he said adding that his brother and two cousins houses too were destroyed in the fire.

Tawau district Fire and Rescue Station chief Julius John Stepen said they were alerted of the fire at 6.21am and 20 personnel were rushed to the location.

“On arrival firefighters began putting out the fire using water from the river, he said adding that the fire was brought under control at 6.50 am and 10 houses as well as six cars were destroyed.

He said there was no report of casualties and the cause of the fire was being investigated.

Lintas fire and rescue chief of operation Laupen Nuar said a team was deployed to the location upon receiving a distress call at 6.18 am.

Firefighters controlled the fire by 7 am and ended it at 8.43 am without any untoward incident reported.