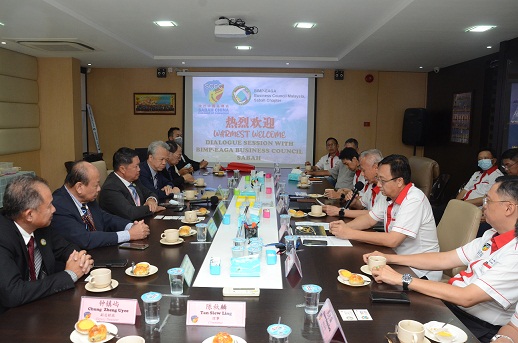 Liew delivering his opening address during a dialogue session with BEBC Sabah Chapter led by Moosom.

He said the Belt and Road Initiative (BRI) advocated by the Chinese President Xi Jinping offered abundant opportunities to the countries along the route.

He said Sabah was the closest state to China geographically and was positioned strategically along the Belt and Road route.

In addition, Liew said Sabah was situated at the central of BIMP-EAGA and has great potential to be developed as a main gateway for trade in the region.

In recent years, he said major reputable construction companies from China have expanded their reach into Sabah and introduced a breath of fresh air into the industry.

Hence, he hoped that SCCC could strengthen cooperation with BEBC to boost connectivity, tap into the opportunities and entice more Chinese investors to spur socio-economic growth in the region.

He said that during a dialogue session with BEBC Sabah Chapter led by its chairman Carl Moosom here on Monday.

Liew also urged the federal and state governments to expedite the expansion of Sepanggar Bay Container Port and develop it into a transhipment hub in the region that connected China, Sabah, BIMP-EAGA for the region and state to prosper.

Meanwhile, Moosom said the BEBC was seeking industry players, especially those from China, to invest not only in Sabah, but also in the BIMP-EAGA region.

We need your (SCCC) cooperation in this. We need your network to come in and participate in BIMP-EAGA.

He said China through China Development Bank had set up a USD 5 billion special loan for China and BIMP-EAGA cooperation.

The special loan aims to support economic and social development of BIMP-EAGA, to bring real benefits to people in this area, and to promote the cooperation between China and BIMP-EAGA.

The loan will be available for projects related to public infrastructure, connectivity, power and other areas that benefit the local people.

Moosom said 95 percent of the special loan was still available, which would expire after 2025, and he encouraged SCCC members to take advantage of the financing facility.