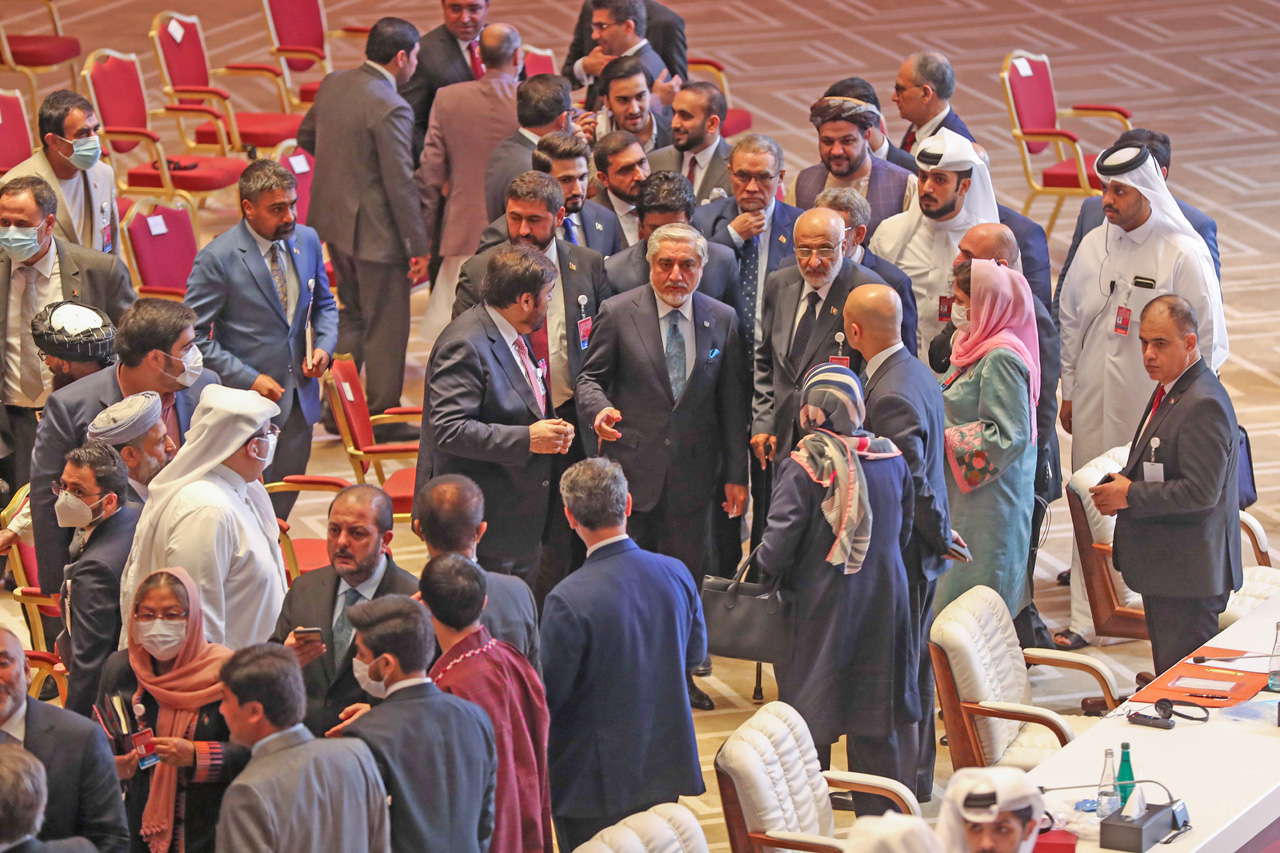 Abdullah Abdullah (centre) speaks with members of delegations at the end of the session during the peace talks between the Afghan government and the Taliban in the Qatari capital Doha. AFP

DOHA: Peace talks between the Taliban and the Afghan government opened in Qatar Saturday, marking what US Secretary of State Mike Pompeo heralded as a truly momentous occasion in nearly two decades of gruelling conflict.

The US-backed talks will be arduous and complex, delegates acknowledged at an opening ceremony in Doha, and are starting even as violence continues to grip Afghanistan.

We will undoubtedly encounter many challenges in the talks over the coming days, weeks and months, Pompeo said as he called for the warring sides to seize this opportunity to secure peace.

Remember you are acting not only for this generation of Afghans but for future generations as well, your children and your grandchildren.

Highlighting the wars brutal toll, Abdullah Abdullah, Afghanistans former chief executive who is heading the peace process for Kabul, said 12,000 civilians have been killed and another 15,000 wounded since the US signed a withdrawal agreement with the Taliban on February 29.

Abdullah called for an immediate, humanitarian ceasefire but his plea went unanswered by Taliban co-founder Mullah Abdul Ghani Baradar, who made no mention of a truce in his opening remarks.

The Taliban have long worried that reducing violence could lessen their leverage at the negotiating table.

Instead, Baradar repeated the insurgents message that Afghanistan must be run according to Islamic law.

The Taliban want to reshape Afghanistan into an Islamic emirate, while the adminstration of President Ashraf Ghani will seek to maintain the Western-backed status quo of a constitutional republic that has enshrined many rights, including greater freedoms for women.

We want Afghanistan to have an Islamic system in which people from all walks of life see themselves without discrimination and live in brotherhood with each other, Baradar said.

Norwegian Foreign Minister Ine Eriksen Soreide urged all sides to include women, victims and minorities and other stakeholders in the process, saying such inclusivity is the key to an enduring accord.

Four of the 21 people on the Kabul negotiating team are women. The Talibans delegation of the same size has none.

In the Afghan capital, residents were glued to their televisions watching the opening ceremony unfold.

I want the peace negotiating team to consider the will of the people of Afghanistan, said Kabul resident Sayed Jamil Ibrahimi.

President Donald Trump, up for re-election in November, has pushed hard to end the US longest war and wants all foreign forces to leave Afghanistan by next year.

But a comprehensive peace deal could take years, and will depend on the willingness of both sides to tailor their competing visions for the country.

The talks are being held in a hotel conference room in Doha, where chairs were dotted at socially distanced intervals facing a banner emblazoned with the words Afghan Peace Negotiations in four languages. AFP