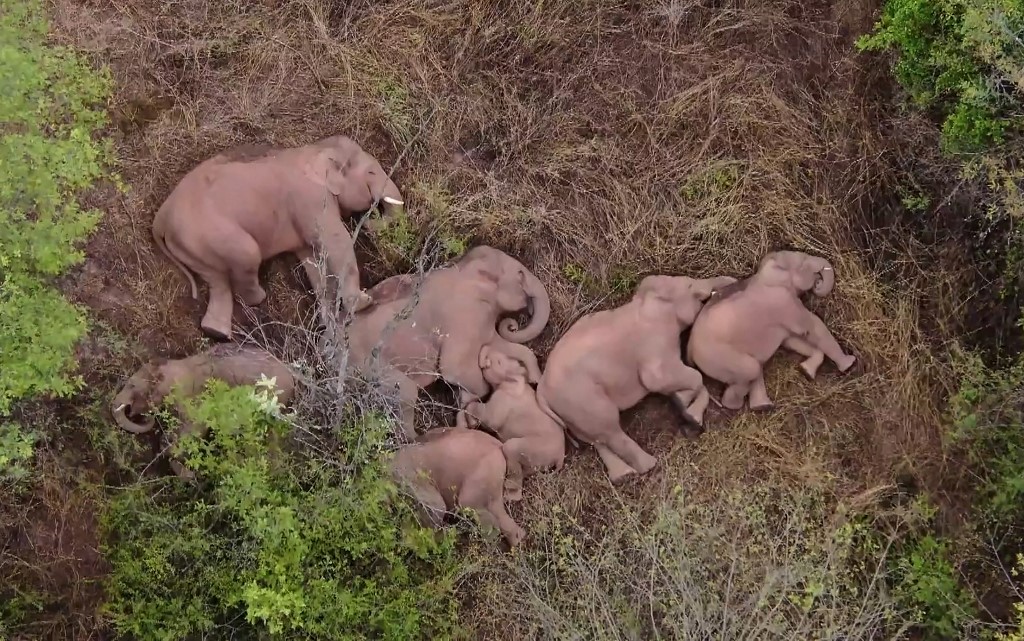 This image made from video taken released by China Central Television (CCTV) shows elephants, part of a herd which had wandered 500 kilometres north from their natural habitat, resting in a forest near Kunming, in China’s southwest Yunnan province. — AFP photo

BEIJING, China (June 8): A herd of wild elephants in southwestern China have been captured on camera taking a breather from a 500-kilometre march of chaos that has caused more than $1 million in damage.

Chinese state television has launched a 24-hour live feed of the herd as the country remains on watch following the 15 elephants’ epic trek through homes, barns and crops in Yunnan province.

Footage from state broadcaster CCTV filmed Monday shows the herd, tired from their adventures, curled up in a forest on the outskirts of the provincial capital Kunming.

At one point in the footage a calf on its back stirs itself, trunk and feet sprawled in the air, before hauling itself onto a sleeping adult and nodding off again.

The adventures of the huge mammals have captivated the nation, with hundreds of millions taking to social media to discuss their journey.

The elephants have been closely monitored by authorities as they lumber through lush countryside. More than 400 people have been mobilised to ensure public safety and dozens of drones are now following their every step.

Convoys of trucks have lined roads in a bid to keep the herd away from densely populated areas, including the more than eight million people who live in nearby Kunming.

The local government has warned villagers not to leave corn or salt out in their yards that might attract the animals.

It has also evacuated residents in the elephants’ path and distributed more than two tons of feed to the scavenging herd.

Experts are unsure why the group first migrated away from their original habitat, a nature reserve in the province. — AFP