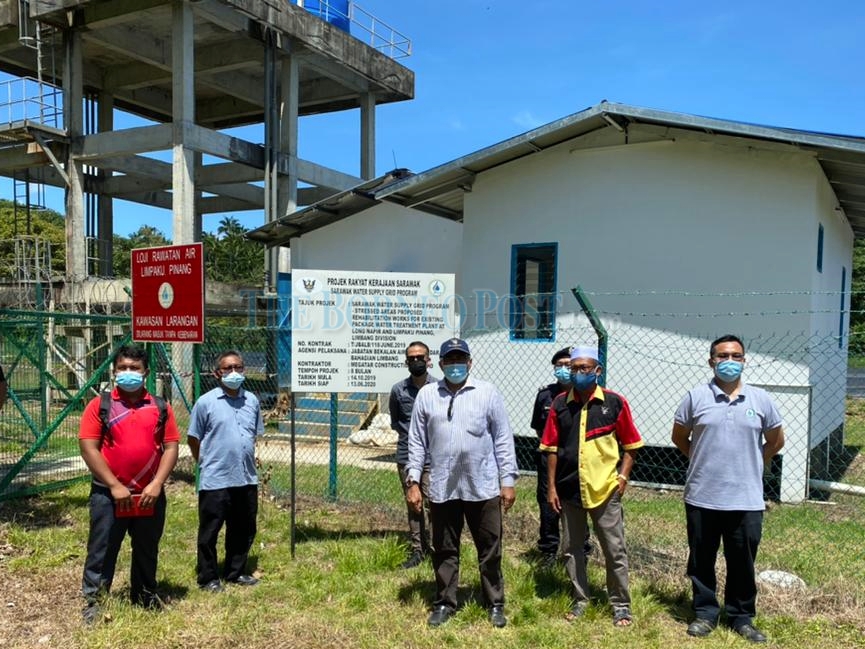 Hasbi (centre), accompanied by Simatziman (2nd right) and Superi (3rd left in background) and others inspecting the water treatment and storage infrastructure in Kampung Limpaku Pinang at the river mouth of Limbang River.

MIRI (April 8): The Rural Water Supply Department (JBALB) should upgrade all faulty storage tanks delivered under a solar-powered treated water supply project in 2010 in Kampung Limpaku Pinang in Limbang instead of repairing only two to overcome the water shortage woes.

This leaves only the two repaired tanks functional while the remaining seven faulty tanks are out of service, resulting in insufficient water supply, said Deputy Minister of Transport Datuk Hasbi Habibolah after a recent visit to this coastal village at the mouth of Limbang River.

The tender was opened for repair works involving only two tanks previously, he added.

The village, a school and a mosque had to bear with water shortage due to reduction of storage capacity of the high level tanks, Hasbi, a former Limbang Public Works Department engineer, pointed out.

On another matter, Hasbi said the village has the potential to be developed as a tourism attraction in the district as voiced out by federal Minister of Tourism, Arts and Culture Datuk Seri Nancy Shukri during her visit to Limbang last month.

The state government through the Northern Region Development Agency (NRDA) will be building a road to link Kampung Limpaku Pinang to Limbang town.

The village is accessible only by river or sea now and with the completion of the road the journey will take about 30 minutes.